I lived in the South for 30 years, the majority in a part of Florida often referred to as “South Georgia” (for all sorts of reasons which do not belong on this blog). So, for the life of me, I cannot understand why the food in Paducah is so lame. Represent the South, y’all! Shame on you 😦

I’d have thought it was just me if I hadn’t heard the same complaint echoed around me. There’s a low-level country fair collection of food tents at the convention center, a few middling BBQ spots, a couple decent locally owned places, and low-mid end chain restaurants galore. The service at most of the chains was terrible; we even walked out of the Outback after our waitress disappeared on her own personal walkabout for 30 minutes. The Outback! The place that invented the intrusive server who tries to join your party.

Here’s a short list of the non-terrible stuff we ate:

–The cheapest food tent deal was also one of the best: roast pork and mashed potatoes with gravy and Southern green beans.

–Pulled pork sandwich from a BBQ smoker parked in the Elder Care parking lot, which needed pickles and a sauce with more heat but was available at 9 am!

–Cracker Barrel had one of the healthiest meals I ate: veggie soup and spinach salad with apples, strawberries and grilled chicken. Actually surprisingly good.

–We also stumbled into an okay Mexican place in the quaint downtown near the hurt book sale. I’d have said “good” but am writing this while eating tortilla soup at one of the best airport restaurants in el mundo, the Frontera outpost at O’Hare, so that’s likely an unfair context.

–A Chick-fil-A sandwich! I know, their politics are odious, but golly that sandwich is good.

We might have found more on our walks, if we–or anyone–had been interested in walking in the freezing rain. (And, driving to search for good food meant giving up a hard won parking space midday–certifiably insane.) One day was gloriously sunny, the day we were in class from 8:30 to 8:30 of course.

Three of the four days were cold and wet, which meant that the convention center often looked like a “shelter-in-place” location. The floors were filled with women who likely hadn’t sat on the ground in a good 40 years. Since that’s my typical airport habitat (usually right next to the power outlet oh-so-sensibly and conveniently located by the men’s room entrance), I was right at home. 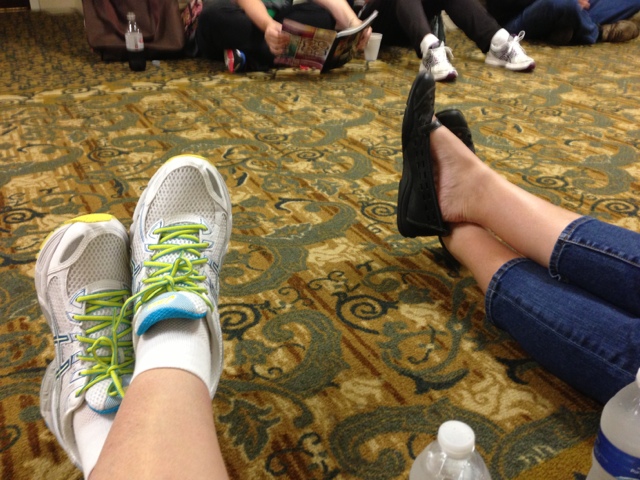