We set off early on day two, knowing we’d leave FanExpo early to hit the Art Gallery of Ontario.  So, we first hit Lego booth to pick up Friday’s freebie.  Our line passed by this remarkable pointillism portrait of the TMNT done completely in 1×1 Legos.  Not the world’s best subjects but the artwork was amazing! 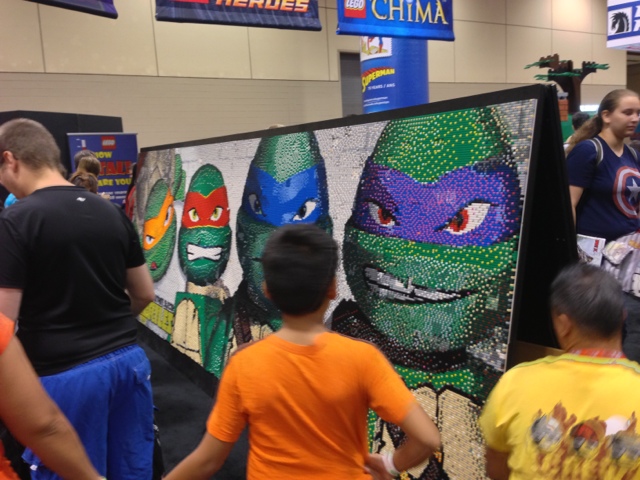 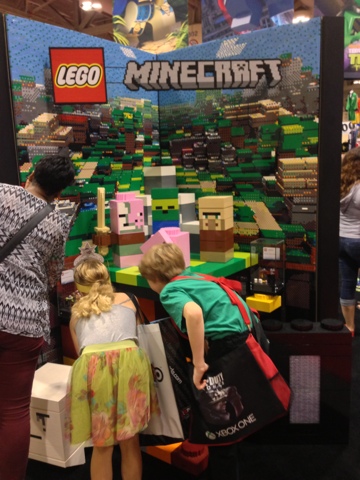 And, around the back of the booth was a cool Minecraft section.  Confession: until today I had no idea Minecraft was a Lego thing even though my kids play it obsessively.

Harper went back to My Little Pony land, turning herself into Rainbow Dash and picking up another free Pony crown and teeny pony. 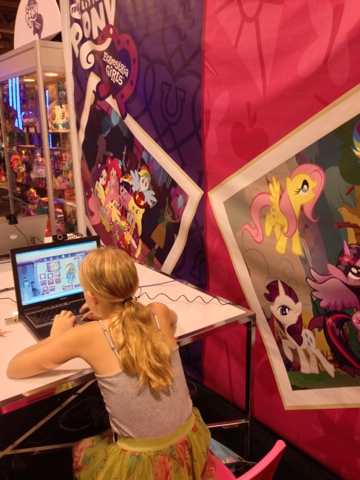 We then got sucked into the UbiSoft booth that was filled with huge displays and games that ran the gamut from G to hard R.  While Ned disappeared into a closed theatre to play an upcoming release based on South Park’s Stick of Truth (guess what it would be rated), the kids grabbed stools in front of Rayman Legends.  We’d never heard of it before, but it was really a beautiful looking game.  Anyone who wonders why gaming is such a huge industry should hang out in the UbiSoft or EBGames booth–these environments are crazily attractive and immersive–they’re like digital candy houses drawing in all the Hansels and Gretels. 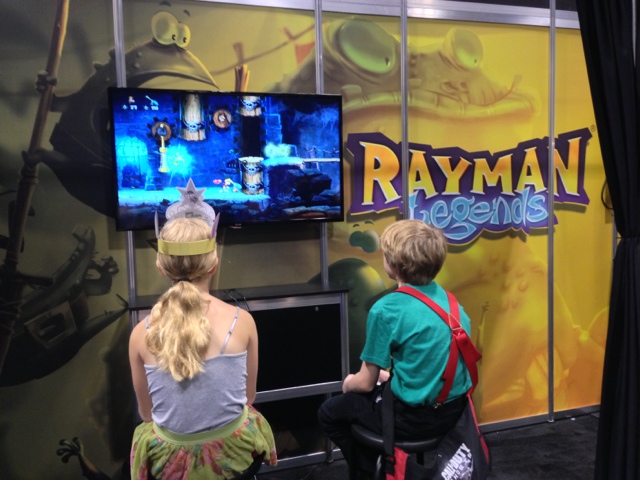 In the next booth, we ran into Disney Infinity.  You can swap out players at will and build environments.  None of us understood the purpose of the game, so Penn and Harper just kept swapping out characters and trying to kill each other.  Ah, siblings 🙂 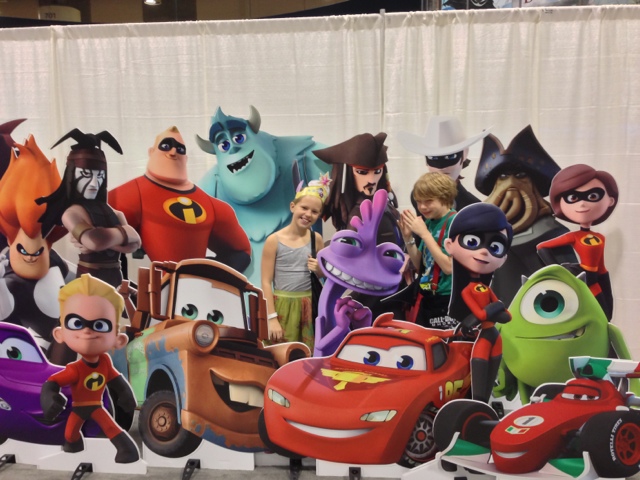 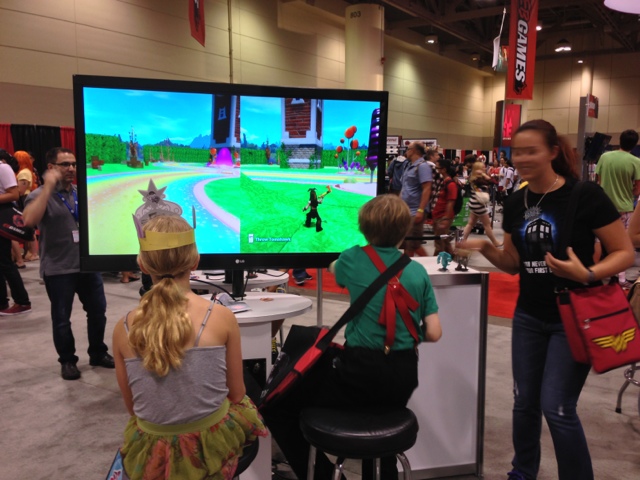 On the way out, we walked past the celebrity signing area and could snap a few long distance photos of 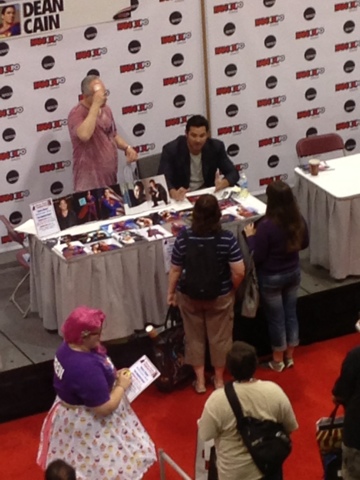 George Takei (who had two minders!) 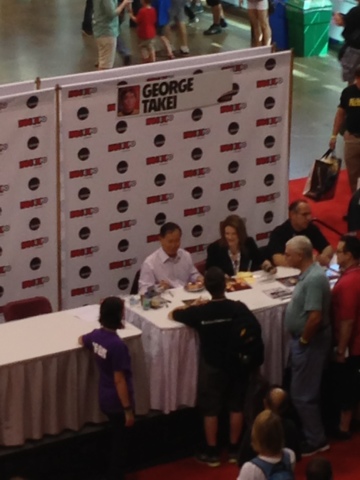 And Brando and Dylan 🙂  Even from dozens of feet away, it was easy to see that these two were being super nice to their fans, leaning in to listen, smiling warmly, reaching out–it was oddly heartening to think that they understood how much this meant for the folks in line.   Andrea would be proud. 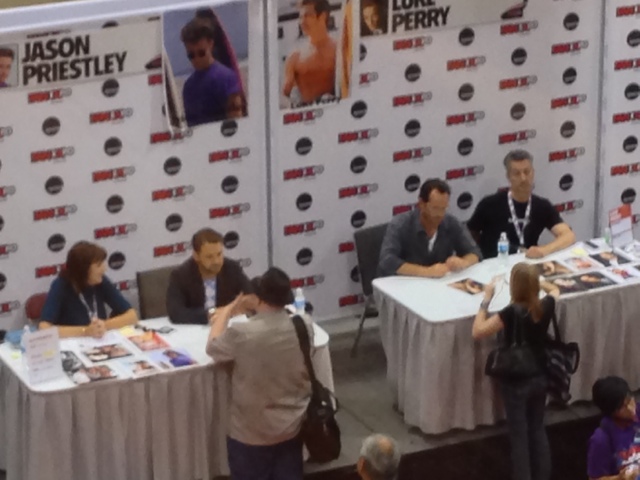 And, here’s an only at FanExpo story.  The wristbands we wear are to last all four days.  Well, the kids’ bands are cheap things like you’d get a fair on “ride ’em all” night, so by day two, Penn had shredded his with nervous energy.  I literally tore a piece of duct tape from the Convention Floor carpet to piece it back together (take that MacGyver, who was actually signing autographs a few rooms over!).  Then, we headed over to the ticket stand to get a replacement …

I had an easier time getting in to see the PRESIDENT OF THE UNITED STATES than getting a replacement wrist band for a 10 year old boy at a comic-con.  Clearly uber-empowered ticket supervisor Wade first suggested that his inventory control was so tight that he had no extras (take that Jeff Bezos), then that we didn’t understand the clear policy about lost wristbands (which it wasn’t), and finally that the duct taped band might not even have belonged to this boy to begin with.  That was a bridge too far, because I had clear and dated photographic evidence of this very boy in a completely different outfit the day before at FanExpo with this very (now shredded) wristband.  Check and Mate via my iPhone camera roll, Ticket King!  Suddenly, the staff found a ticket coupon, gave us a new wristband, and Wade dematerialized like an Evil Ex in Scott Pilgrim.  I may never have played D & D, but no one out-maneuvers me in a bureaucratic role playing game.  No one.