Today was a full FanExpo day–from 9 to 9!  We hit Starbucks on the way to the Convention Center and ate breakfast from our prime spots in line–which let us do some nice line watching.  It was March of the Daleks day, and this was the cleverest and cutest lil’ Exterminator on Front Street 🙂 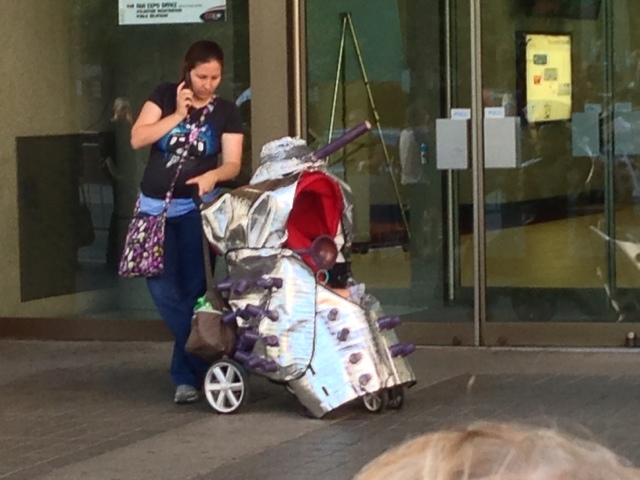 FanExpo brings the factions together.  It is the world in which Finn lives with random Elf with Tim Horton’s guy. 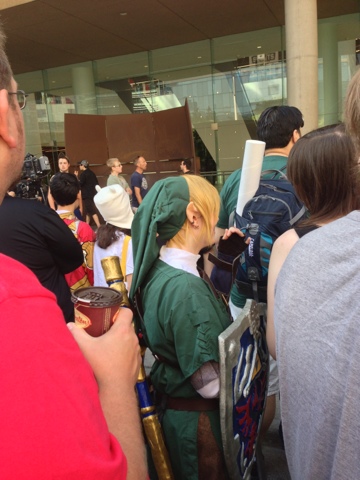 Where Mega-Hat Slash impersonator and Wonder Woman both queued up about an hour early to see the Adventure Time session. 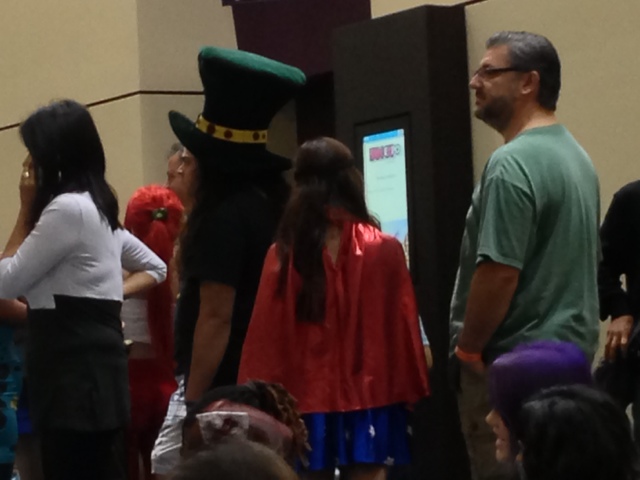 And, where Penn and Harper got prime seats to see the beauteous … 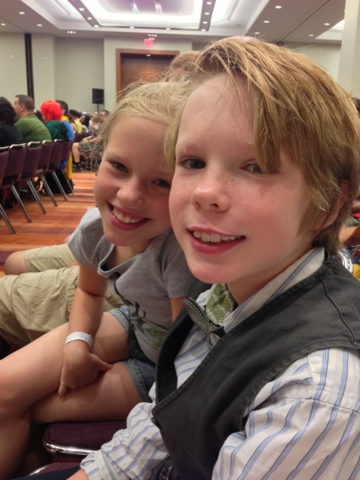 Ms. Gina Torres!  Who was super stylish, funny, smart, engaging and just all around fab!  Plus, she answered Harper’s question from the audience:  “You mentioned that you loved musicals.  What musical would you like to star in?”  Answer: In The Heights (“It’s my story,” she exclaimed) and (surprise selection) Mame!  She also spoken lovingly about Mr. Torres (aka Laurence Fishburne) as “a badass” and one of America’s finest actors, and of her own daughter.  And, she artfully sidestepped the awkward question about Ben Affleck as Batman while also revealing that she’s a fan of Sucker Punch and the Michael Keaton Batman.  Super cool! 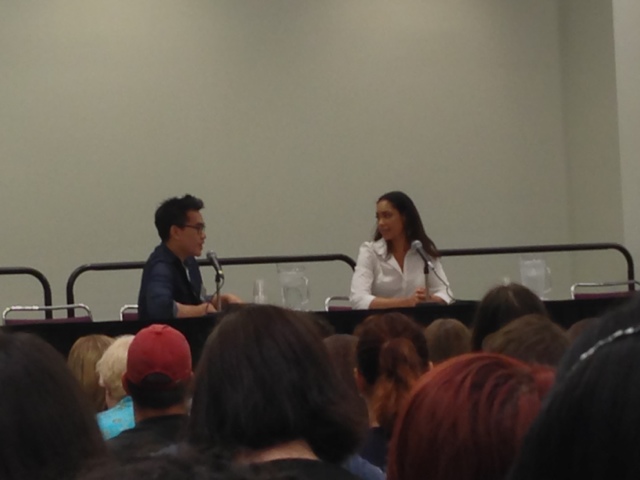 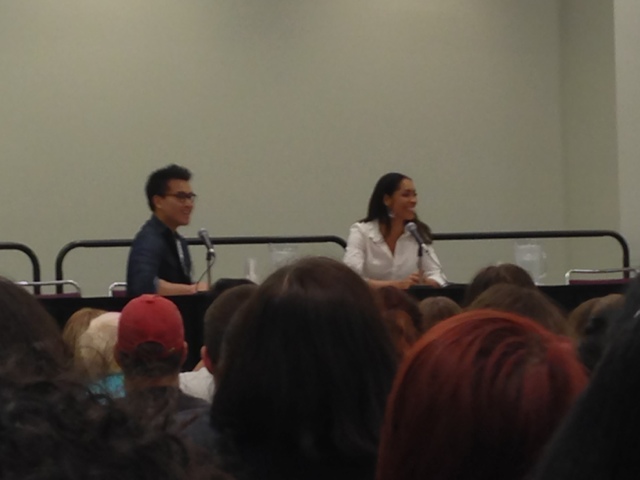 As soon as this panel was over, we booked it to the South building to catch a Pendleton Ward curated set of Adventure Time episodes and a world premiere of a new AT.  Along the way, I snapped a running photo of Nathan Fillion. 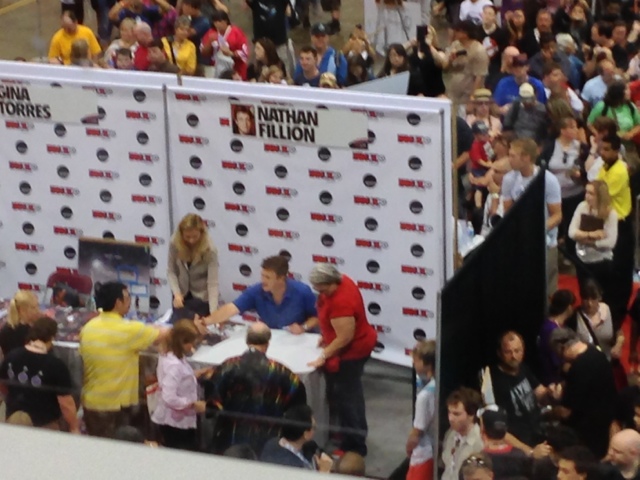 We got to the AT line by a thread.  The queue closed a few folks behind us, and the standby holding line was probably about twice as long.  We were especially excited because everyone in our line got a lottery ticket to win one of 50 DVD sets of Adventure Time, Season 2. 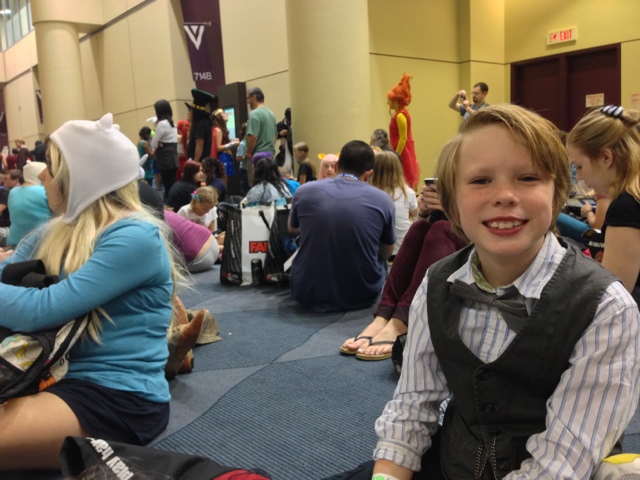 Well, it was our lucky day!  We picked up two AT Mad Libs books, scored a free Finn hat (handsomely modeled by Ned), and won a set of DVDs.  Plus, the episodes were lovely and odd and funny–a perfectly curated set.  There was something so sweet about this particular crowd.  They cooed at the cutest little Finns as they walked in, sang along with the AT theme song, and oohed at each episode. 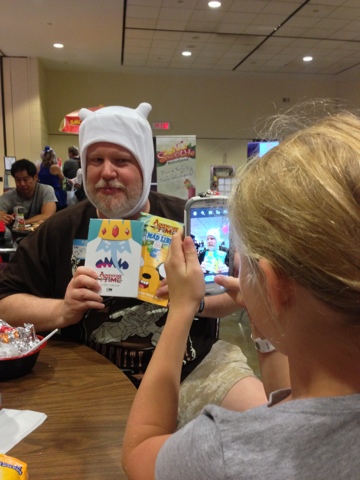 We hit the con-floor for a while after these two presentations, scoring some more free swag–like this cute Scribblenauts hat.  And searching for more odd vinyl toys and Doctor Who-iana. 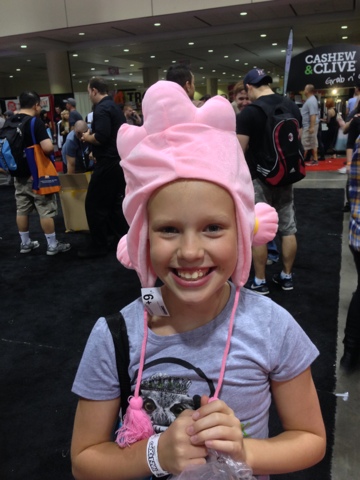 While hanging at the Hasbro booth to get another free My Little Pony, Harper met Twilight Sparkle.  They made a fetching pair. 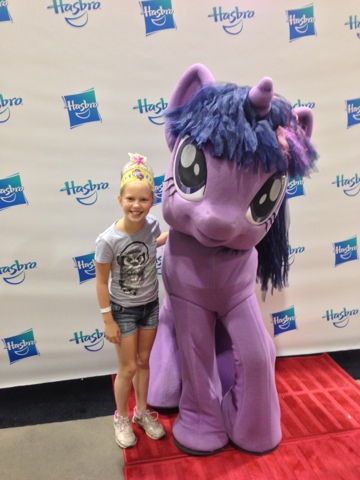 From there, we waited in the world’s most bizarrely organized line to see a sneak of a new fall series starring Karl Urban (a guest at FanExpo).  The show, Almost Human, was okay, but the real winner was Urban, who introduced it with a winning charisma and a Robin Thicke-alike look that’s certain to spell success for him regardless of the future of this show.

We then wandered off to the Theatre District to find a non-hot dog, non-pizza meal.  Ta-da, yummy steaks and pastas in a lovely candlelit restaurant with a great window view. 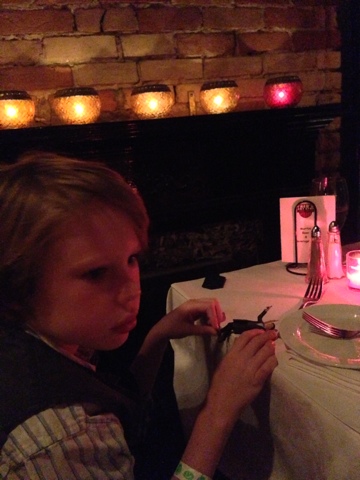 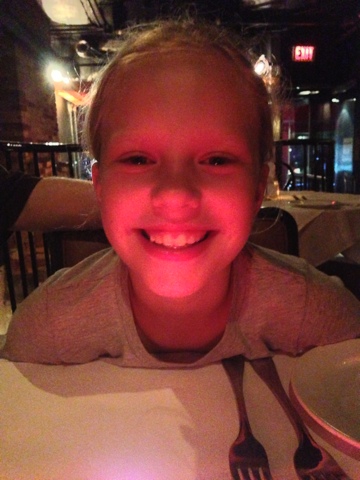 Finish that with a walk home on a great summer night, and Adventure Time came to a great end.