Today, we ventured out in our new boots (and rose print thermal tights for me!) to get as Britty as we could. 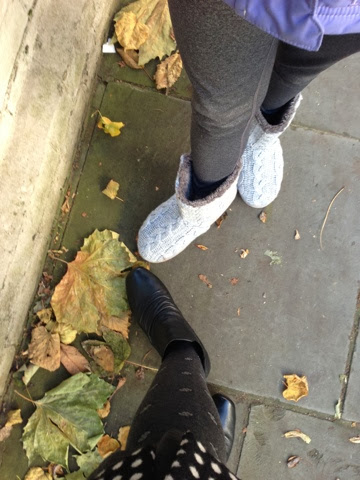 We hopped the Tube to Tottenham Court Road … 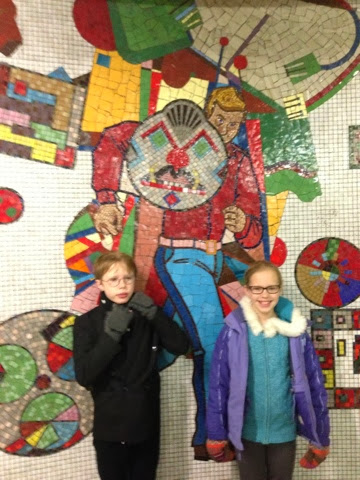 for the British Museum! 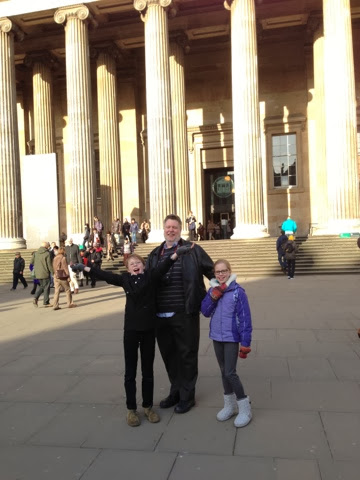 There, we sought to follow Tennyson’s advice to wear out our feet in search of knowledge and stuff.  (Cut me some slack, I was an Early Modernist, not a Victorian.) 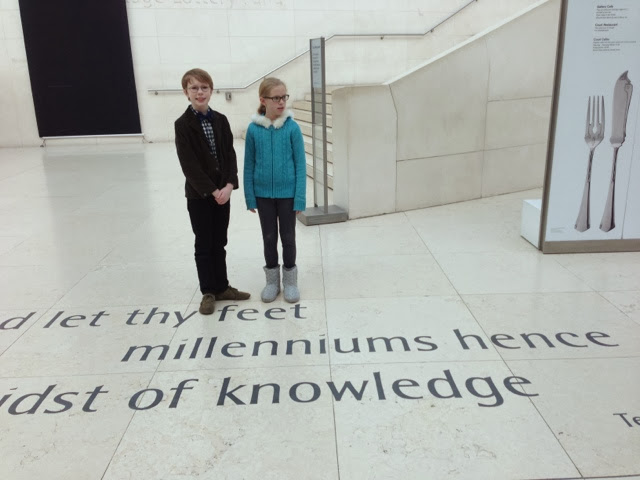 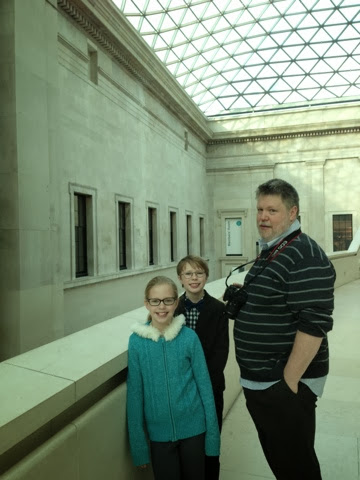 As Penn noted, the museum is both overwhelming and awesome, which meant we had to refuel.  The big restaurant is closed for refurbishment and reimagining, leaving us with the pop-up No. 63.  It offered crazy good holiday themed turkey BLTs (with stuffing and cranberry sauce) and wickedly rich roasted tomato soup with some oregano infused oil.  And, wonderfully crusty bread.  Yay–we were ready to throw ourselves back into the depths of history. 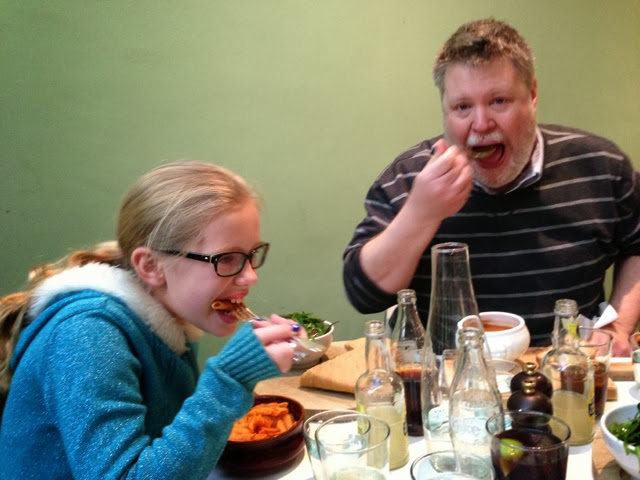 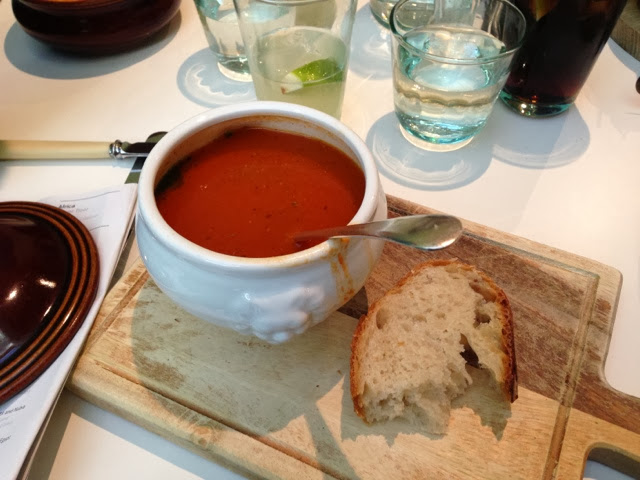 I’m a smart person and a pretty decent writer, but words are inadequate to express what it’s like to share thousands of years of history with one’s kids.  Truly amazing 🙂 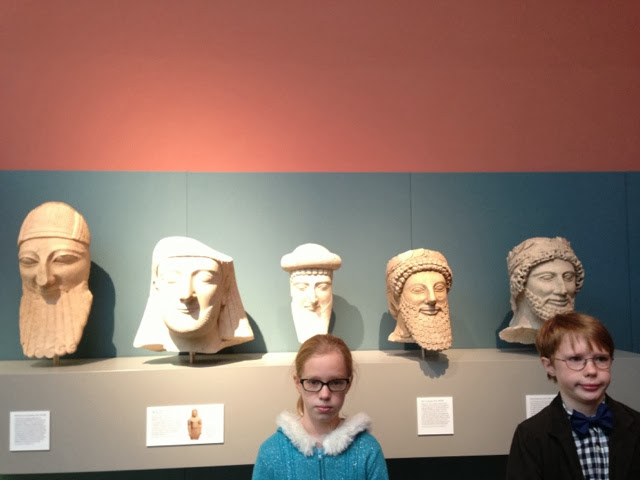 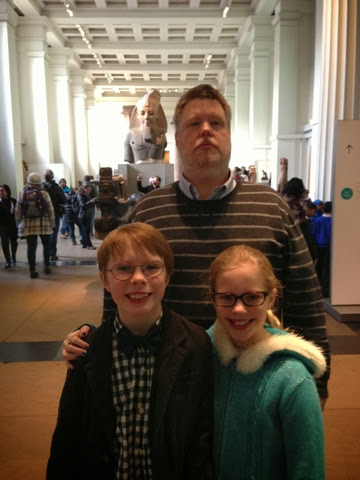 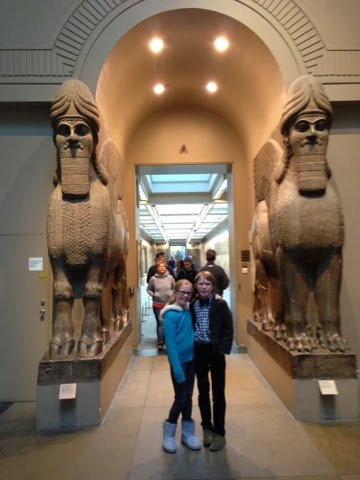 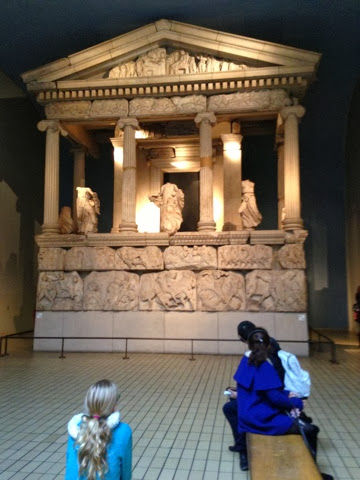 And, then we were off for a proper English tea–also very Britty.  But, I had cappuccino.  (Even in England, tea is disgusting, but that’s just me.)  Big thumbs up for the scones, tarts and raspberry jam from all at the table, except Harper, who shunned the scones and went for the lemon cupcakes with strawberry icing–which seemed to have three ingredients, all of them sugar.  We picked our tea place because it offered a 2 for 1 special online, and it turned out to be quite mod, which bright orange walls, free form floral shaped chandeliers, and the coolest sinks in the world.  Sugar high! 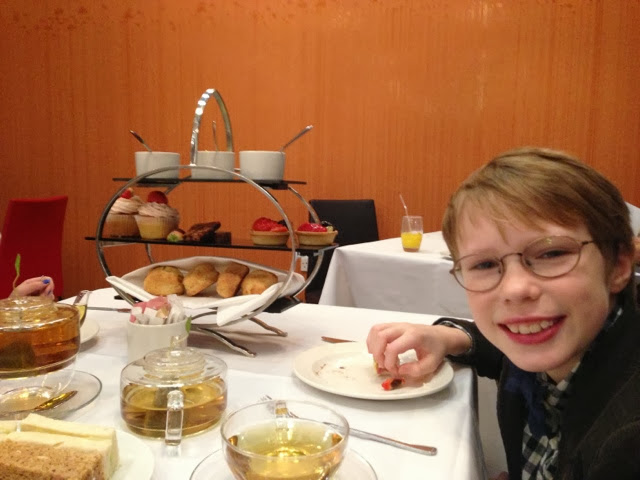 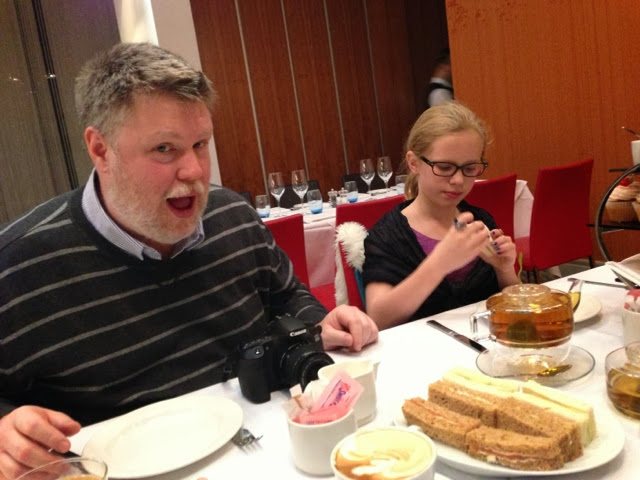 From there, we headed to Covent Garden to stroll a bit in the Christmas cheer.  Penn got picked by a street magician to assist in his act, which made his day, especially when he got laughs from the crowd for his reactions and witty banter.  Example: Magician, “Son, turns out I’m your long lost father.” Penn, throwing his arms wide for a hug and breaking into a big smile, “Dad!”  In the end, the guy gave him a fiver, but Penn donated it back. 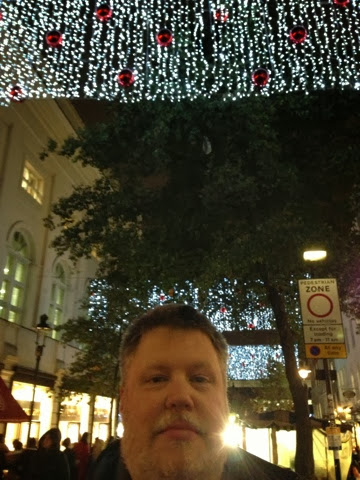 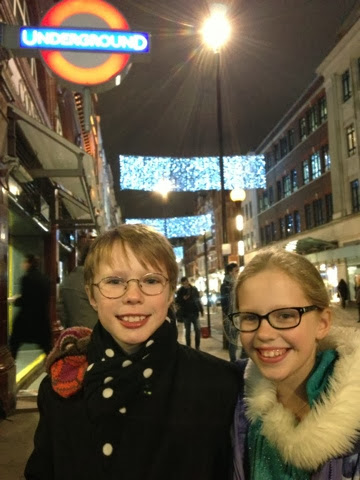 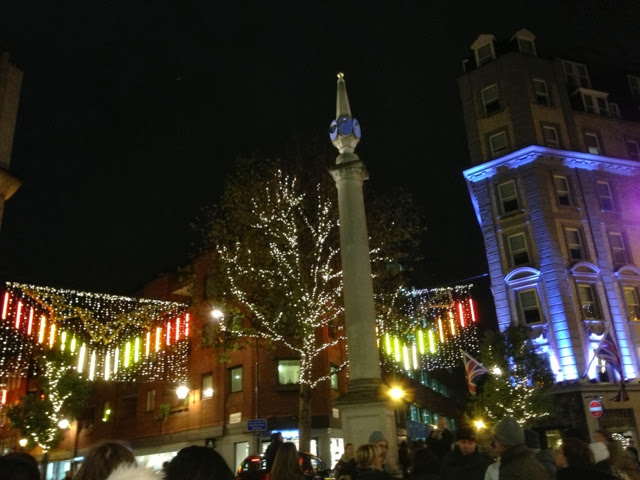 And, then, it was off to Matilda, which is just as funny, touching, clever, and engaging as everyone says.  Because London theaters are much smaller than their NY cousins, it felt like we could touch the stage, which made the show even more electric.  Loved it! 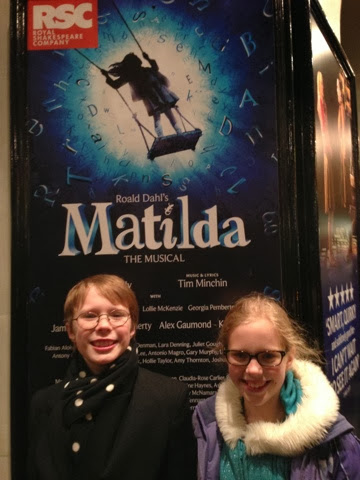 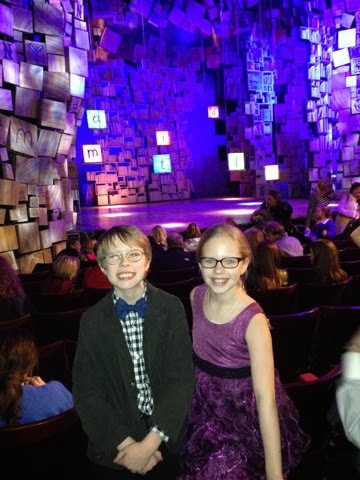 Nearly invisible Harper is doing her Matilda pose below. 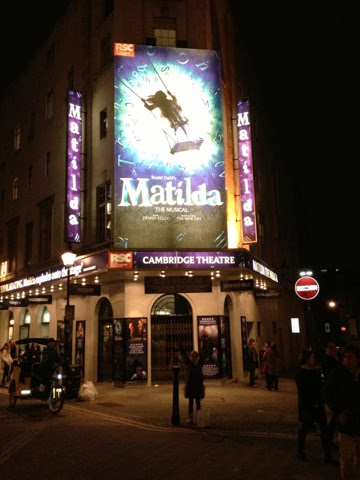 Because we were crowding onto the Tube at Covent Garden along with everyone else heading back around 10, the trains were crazy busy.  Funny story: we tried to cram onto a full train, but only Harper got on and the doors nearly closed.  I jammed my arm and knee into the door to keep it from shutting but it wouldn’t reopen.  A guy on the inside also tried opening the door, but it wouldn’t budge.  Ned offered helpful advice, “Honey, get off at the next station, we will find you,” which he later said he was channeling from Liam Neeson.  I took a more direct approach, pounding on the side of the train with my free arm and shouting, “Open the Door!” repeatedly in my “Going All Anne Kress” mode (as the kids call it).  They opened the door.  A few moments later, everyone was past the panic and smiling at the weird pug in antlers. 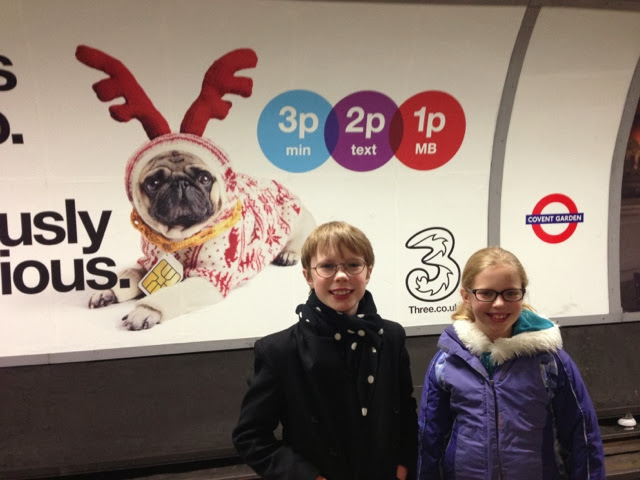 And, then we squeaked into Nando’s 10 minutes before it closed to have wings. 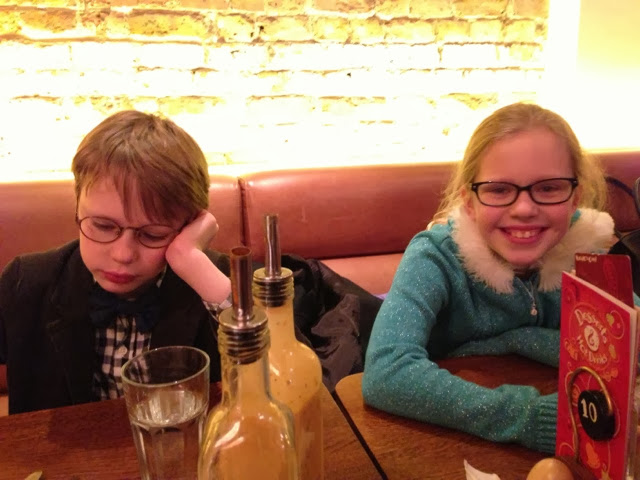 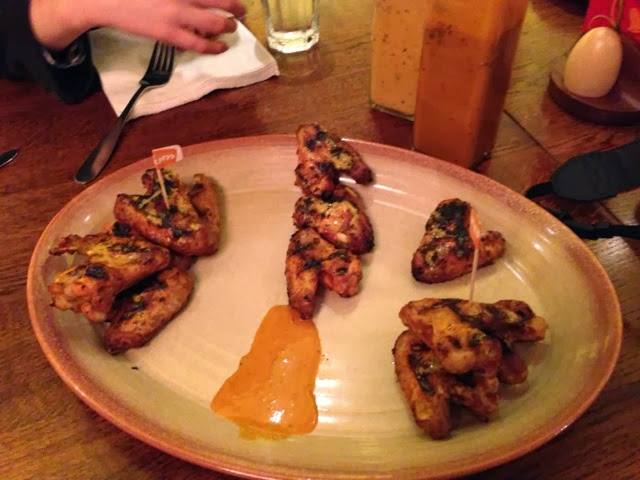 So today’s lessons: history is awesome, scones are yummy, Matilda rocks, going “All Anne Kress” works across national boundaries, and wings are the perfect ending to every day.