I mentioned we decided to stay in a flat in London.  It was a great decision!  We were able to set up base in a real neighborhood, which let us pretend we were living in London for a week: going to the shops, having favorite stops, watching the neighbors in the morning while making breakfast, sitting at our little dining table watching tv, even doing some laundry.  The location in Kensington was amazing, and it was about a quarter less than we would have spent in a hotel.  We loved it 🙂  Here’s my kitchen window view. 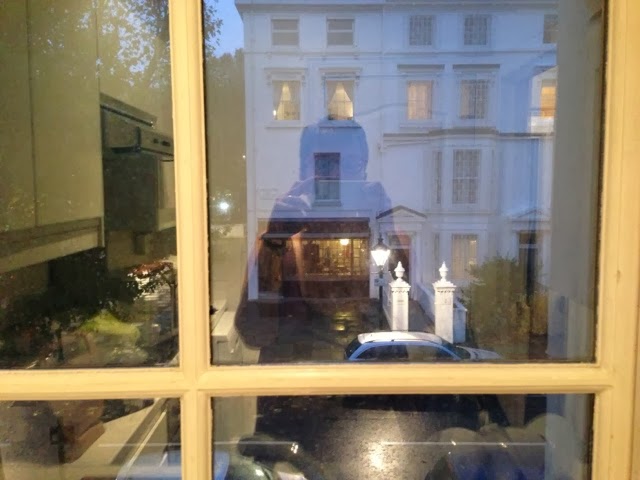 On our last day in London, we left our flat for Hogwarts, grabbing provisions for the short train ride to Watford Junction. 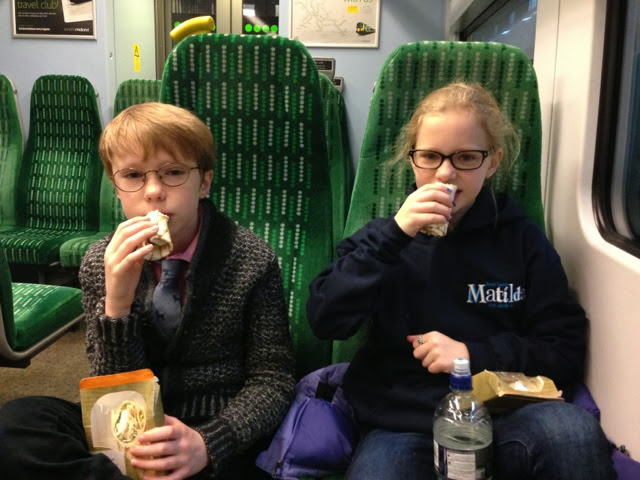 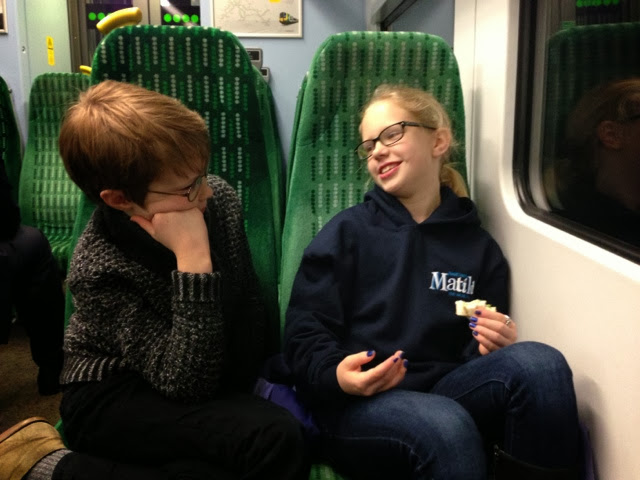 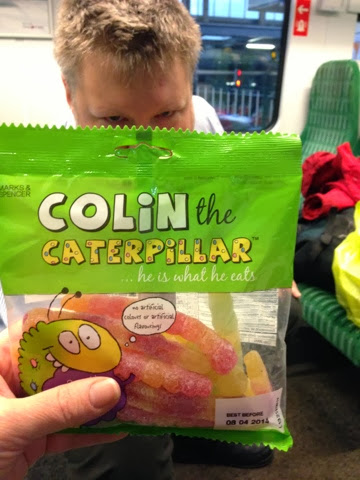 Seriously, can you imagine that the train station for Harry Potter Studios in an American city would look like this?  Or that you’d be directed to a public bus shelter to wait for the “cash only” bus from this glamorous depot to the studio that held every single Harry Potter movie prop ever?  Uh, no. 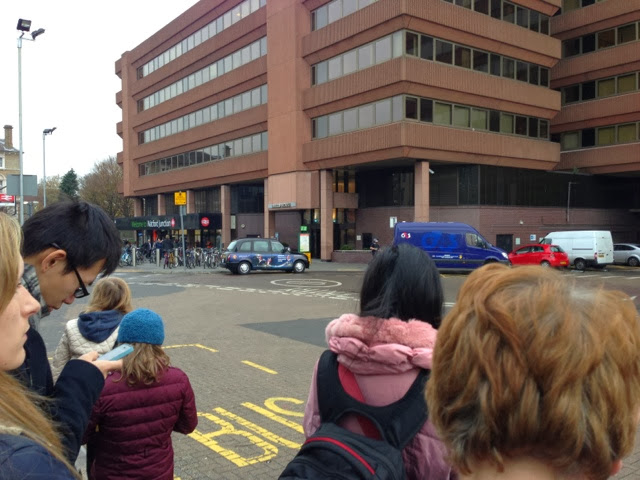 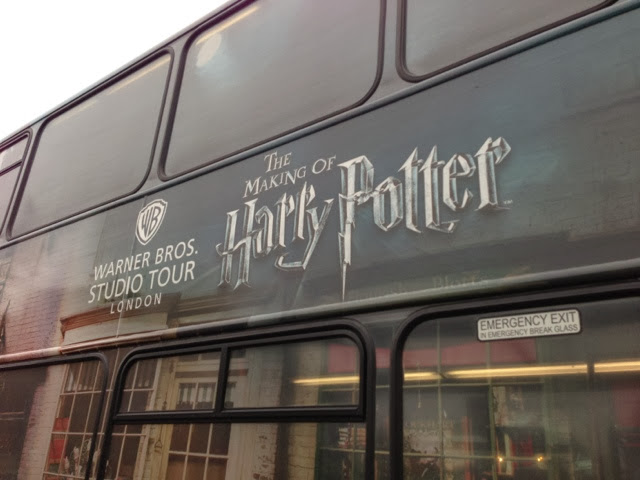 During the bus trip, a 13 inch monitor at the front showed a short trailer for the studio tour.  It was comically undersized, given what was waiting for us … 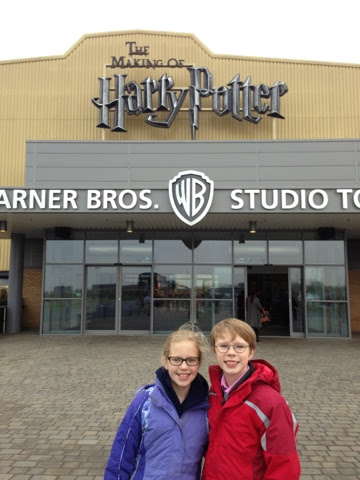 The big promo for the studios right now is that Hogwarts would be covered in snow and decked out for the holidays.  Hence the tree. 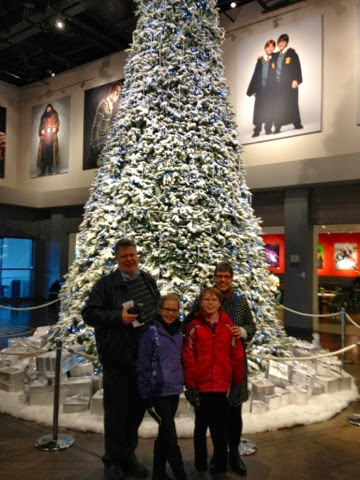 I have watched every Harry Potter movie dozens of times–in whole or part–with my kids.  I remember cuddling in the “big bed,” snuggling on the sofa, sitting under the stars at the drive-in, snacking on popcorn at the movies; laughing, crying, oohing, ahhing; all with two constants: Harper and Penn.  Even more than the books, these movies coincided with my babies growing into children and now into pre-tweens.  They’ve been the background ABC Family Marathon to many a Saturday morning over breakfast of chocolate chip pancakes and waffles or to many a Sunday afternoon prepping dinner.  So, looking at these doors, as a family, knowing that on the other side was THE Great Hall was so remarkable that it brought tears to my eyes. 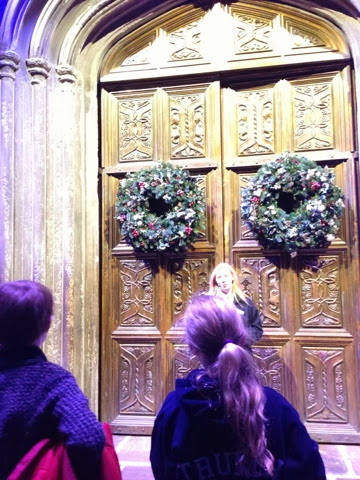 And, nothing disappointed!  Even Ned, who (kindly) mocked our excitement at going, was impressed.  We really walked right into the world of Harry Potter.  In the best way, it was super nerd heaven–no rides, no animatronics, just prop after prop, set after set, and costume after costume.  Honestly, I took so many pictures, it was almost shameful.  Here are just a few: 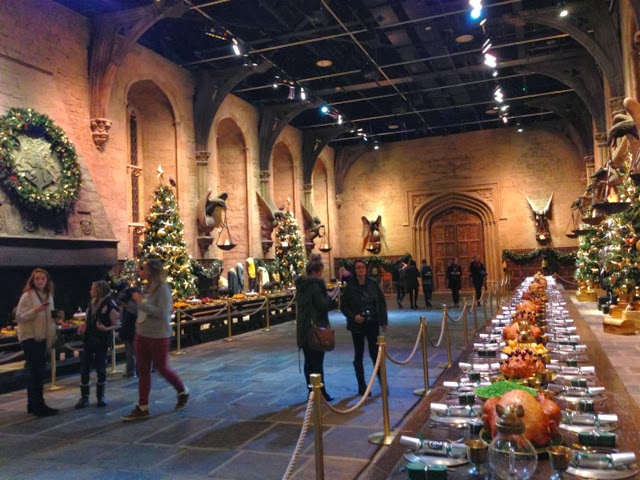 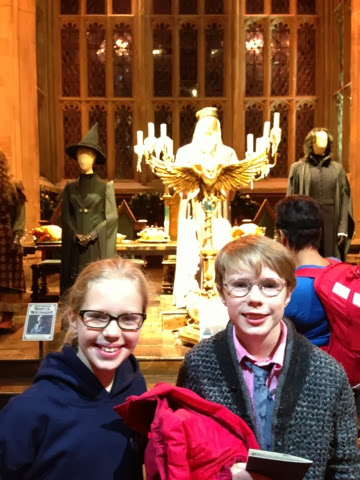 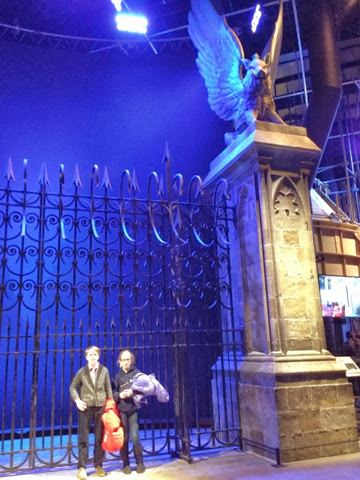 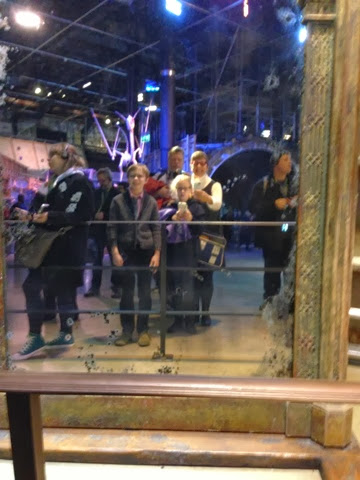 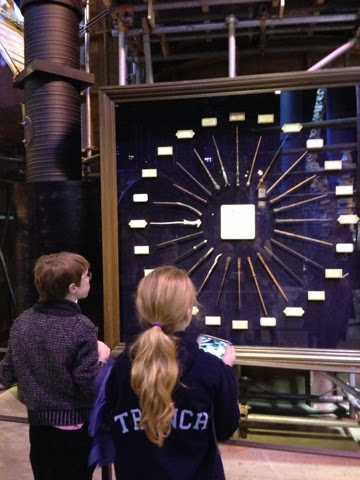 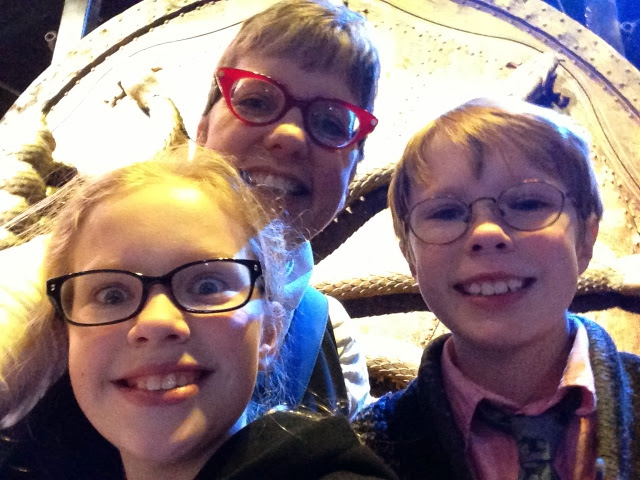 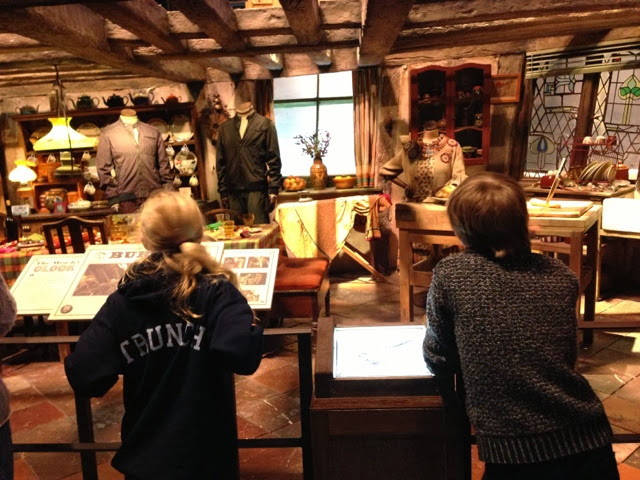 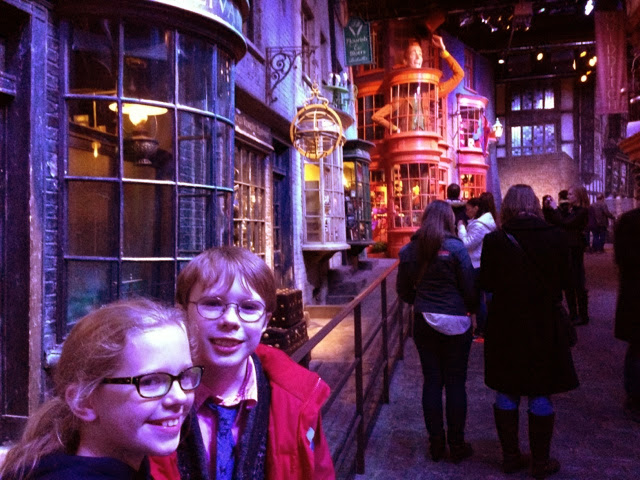 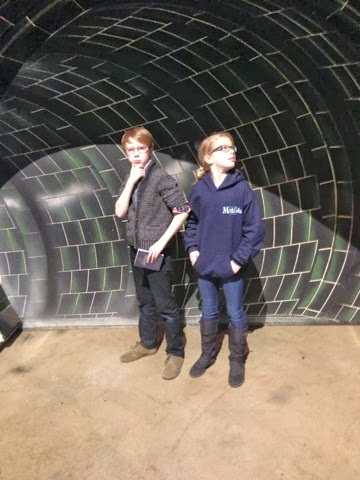 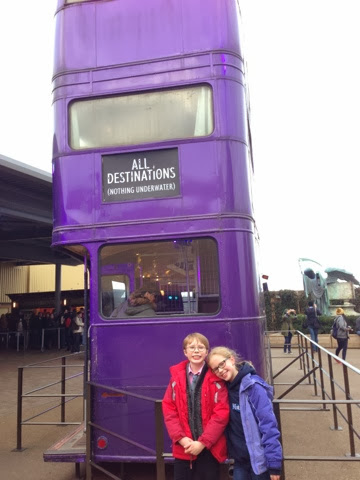 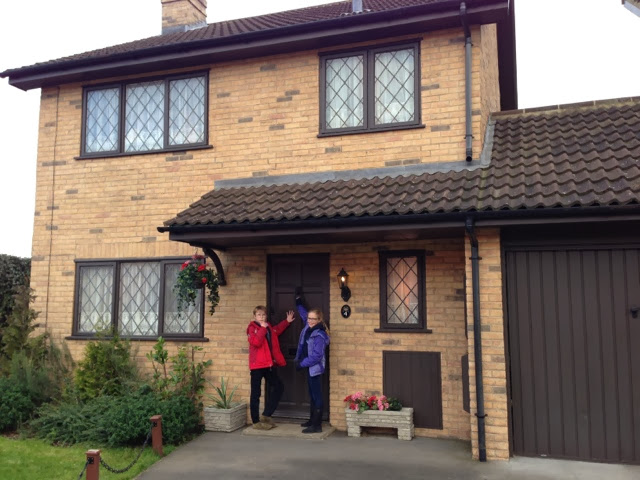 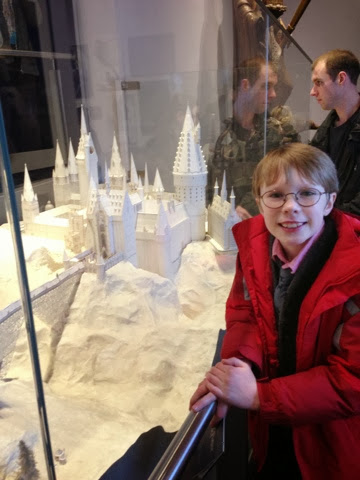 And, then, turn the corner and there it is: the full model of Hogwarts used in the films.  So huge it basically takes up a soundstage.  Lights twinkling like the students are moving throughout the hallways; snow gently covering the grounds and buildings; waves lapping up against the shore.  Truly grand!  It was almost as much fun to watch all the Potter-geeks, with wide eyes, circle the gigantic model over and over–running from the bottom to the top to start the journey again. 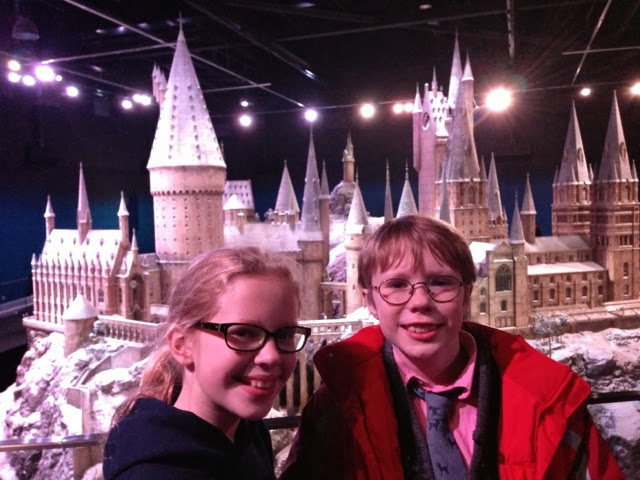 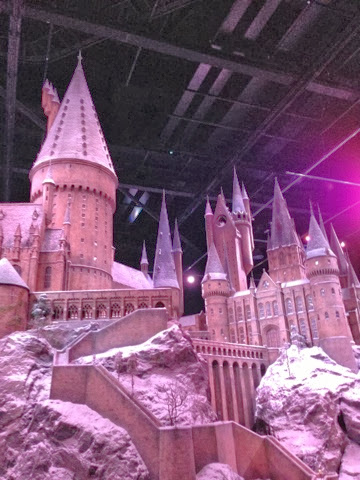 The tour ends in a very special wand room featuring the names of all 4000+ people who worked on the 8 films.  The entire tour really foregrounds the incredible work done by 1000s of craftspeople and artisans who created the world in such a detailed, imaginative, rich, and layered fashion that in the end, to so many, it became real.  So, it was nice to see that in the wand room of honor, all 4000+ are treated equally.  The names of people like J.K. Rowling and David Heyman and Daniel Radcliffe are mixed in with those of costumers, make-up artists, and model makers. 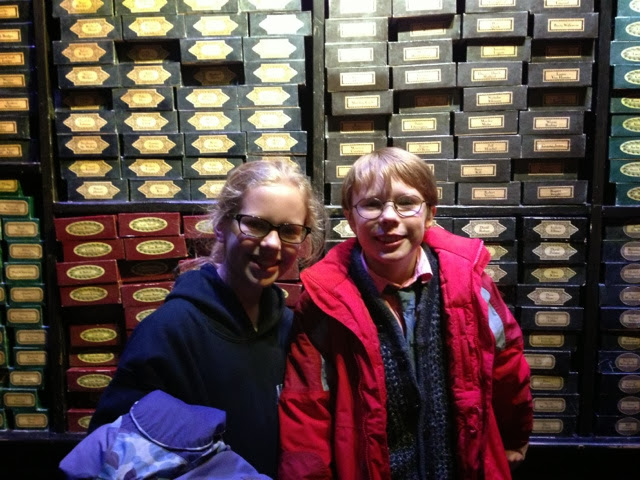 That was our last big activity in London, so it was fitting that a woman stopped me in the gift shop to ask about my TARDIS bag.  Turns out she had also gone to the Doctor Who Celebration, but on Saturday.  We chatted about being Whovians, how super cool the Celebration was, and then how we got even more of our nerd on by making the pilgrimage to HP Studio Tour.  Perfect!
From HP, we went back to Covent Garden to retrieve Penn’s Adventure Time hat, which he lost at Matilda.  Since we were there anyway … we paid a visit to London’s outpost of Shake Shack 🙂  Covent Garden was done up for the holidays in a (literally) big way!  The burgers were as good as always, and the concretes were appropriately London-themed.  Ned got the sticky toffee one … delicious! 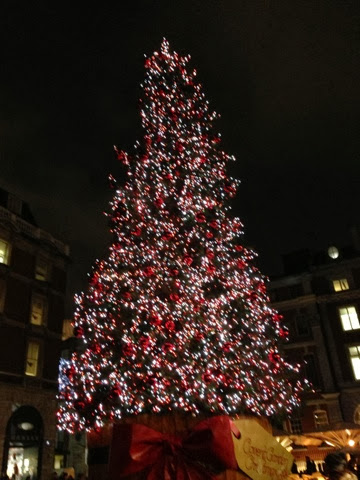 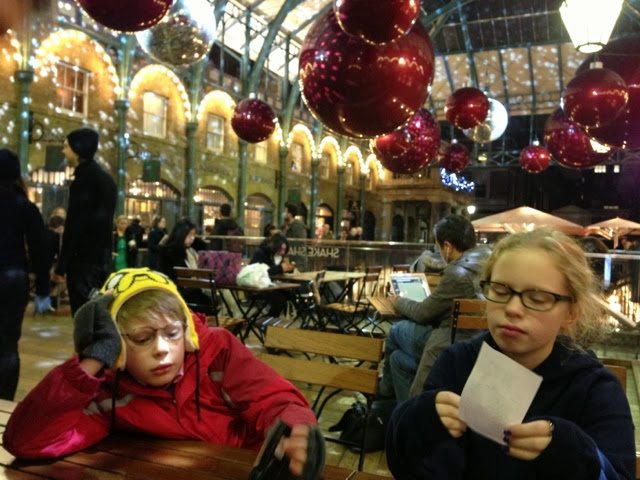 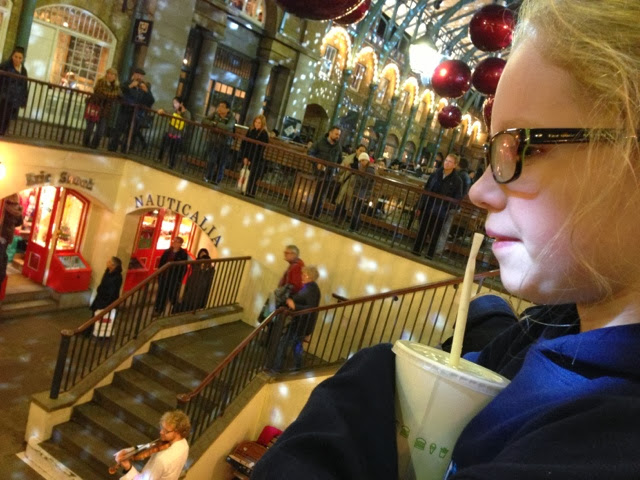 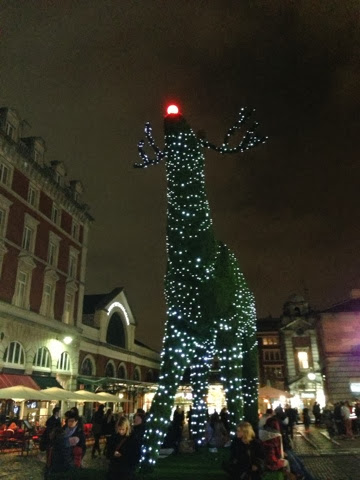 By the light of Rudolph’s flashing nose, we said goodnight and goodbye to London, and set our alarm for 3:30 am to “Allons-y” to Paris.