We got up at 3:30 am, yes AM, to catch our 5:40 am Eurostar to Paris.  The streets of London were dark and empty, as was St. Pancras when we arrived.  The only other folks there were clearly on the same train, but they had obviously gotten there even earlier and staged a zombie-like takeover of the Starbucks (the only place open in the station).  Truly, they were sleeping, heads down, blankets on, on tables in an empty, modern-y, glass-y train station in one of the world’s busiest cities.  It was like a scene from Contagion.  So, of course, my children mocked them. 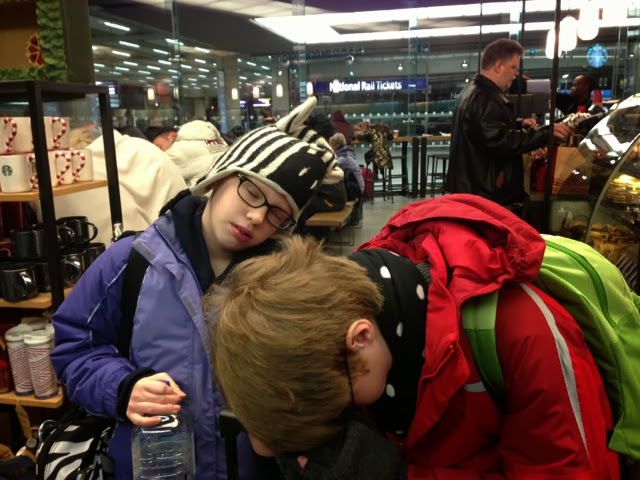 This tree is lovely … and huge … and it also gives a sense of how empty this vast train station was. 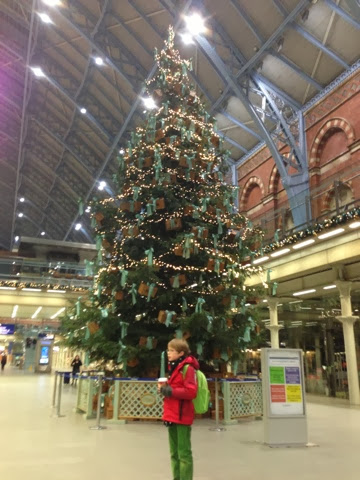 Traveling by Eurostar was awesome!  I wish plane travel worked this easily and was this civilized.  We had our massive Starbucks cups and bag-o-breakfast and (wait for it) took them through security!  Seriously, they even had cup holders so that the drinks wouldn’t tip as they went through the security scanner.  On the other side, the terminal looked like this lovely gleaming EPCOT vision of what future travel would be, not like some island of the endlessly delayed damned.  So, so cool! 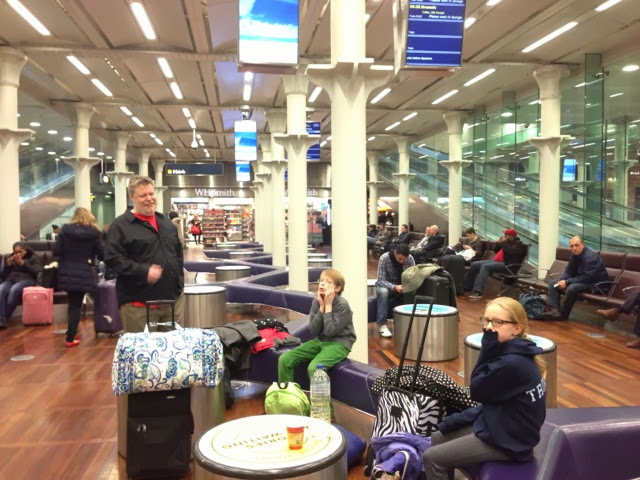 On the train, we sat at a little table and most of us eventually passed out for the trip under the English Channel. 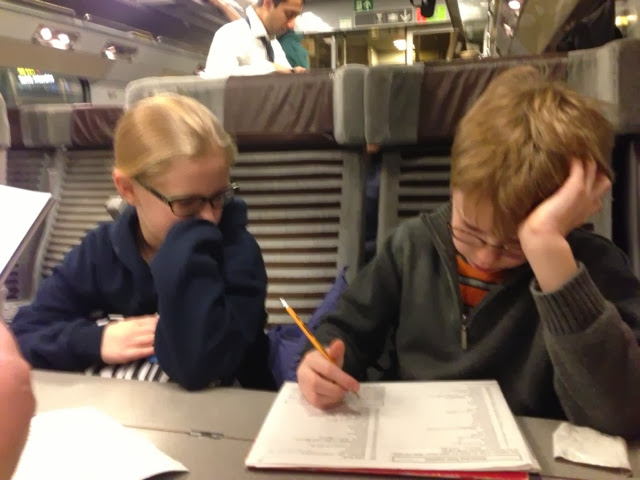 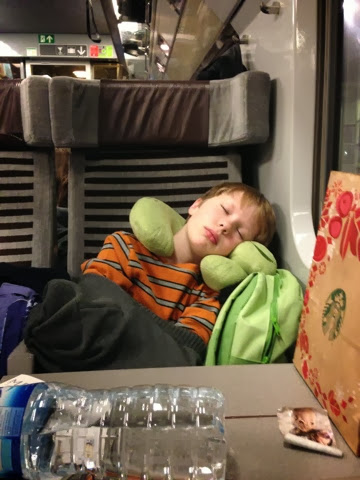 Oh, and we learned that even Parisians love the Doctor! 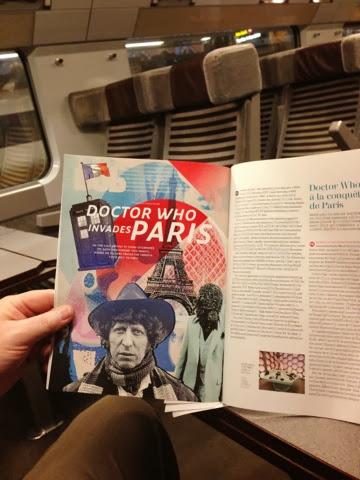 Then, voila, we were in Paris.  Well, we were in Gare du Nord, which like all Paris train stations (and all of Paris, really) is filled with confusing signs seemingly designed–in their smug yet engaging Parisian way–to say, “We don’t care. We know you’ll love us no matter what we do. We are Paris.”  And, of course, Paris is right. 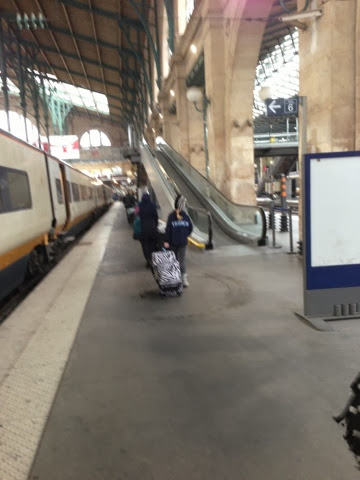 Because, honestly, look at this. 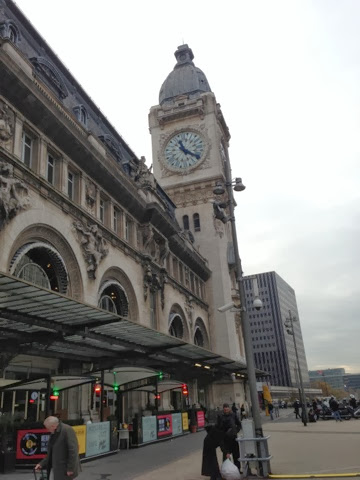 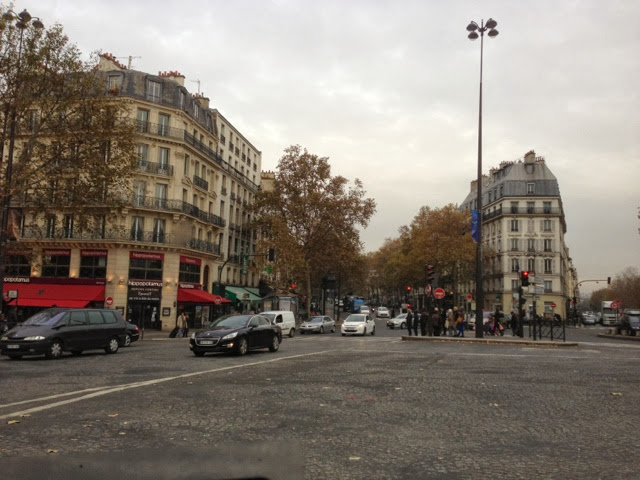 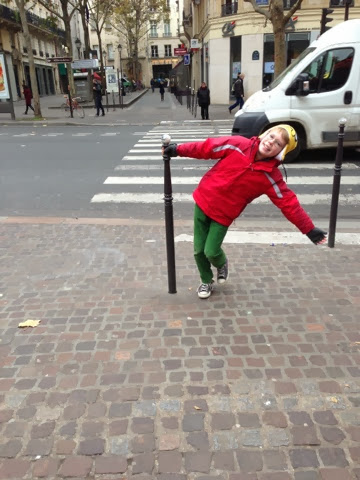 When we travel, we tend to be proximal eaters rather than freak-out foodies.  So, if something’s nearby on some stage of our 14 hour march days, and it looks interesting (or, if we’re really desperate, open), there you go.  Usually, it works out wonderfully.  Case in point, we ran across this bistro on our first walk.  It looked cute and had a wacky but happy looking pig and cow painted on front, had a good selection of formule du menu options, and was there when we were hungry.  Another good sign: we seemed to be the only English-speakers in the place throughout lunch. 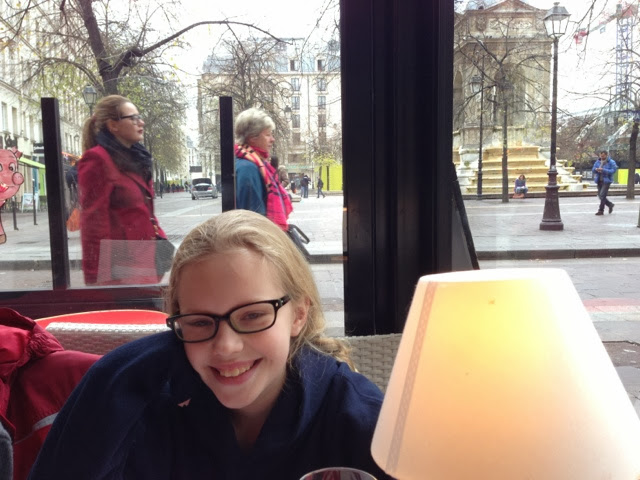 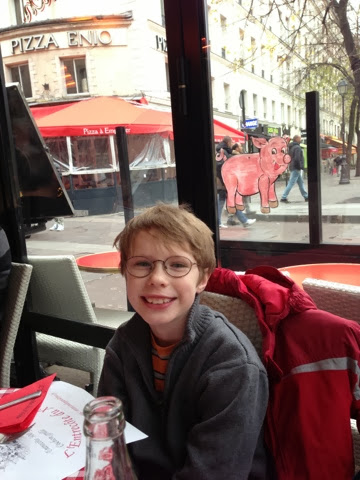 I ate half of one of those chickens rotating behind Ned.  He ate a small steak au poivre.  We both had tureens of cheesy French onion soup we could have happily bathed in.  Penn had a decent hamburger; Harper had a perfectly cooked chicken breast.  Everyone had frites. 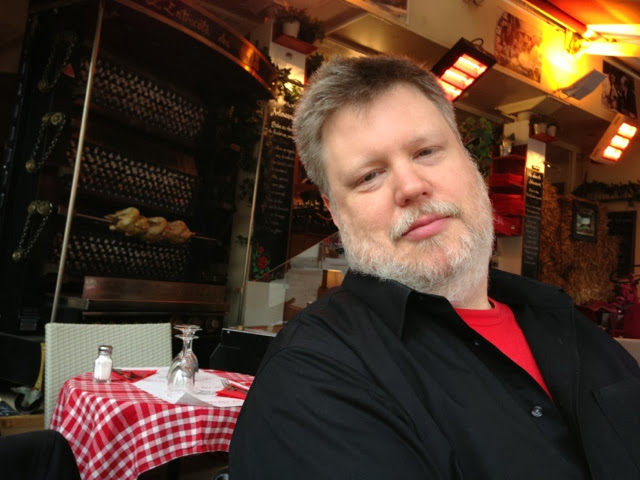 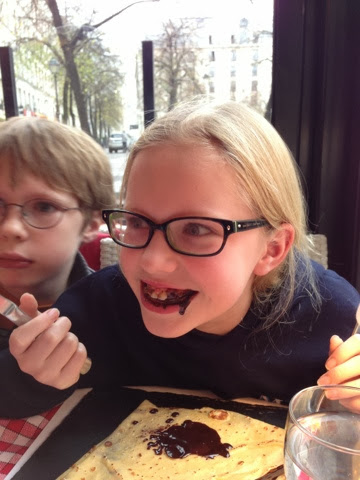 Energized by our decidedly un-lowfat French lunch, we set off for the Seine.  Somehow we managed to find the Parisian pet district: window after window, shop after shop filled with the world’s cutest bunnies, puppies, and kittens.  Each begging to be wrapped in a diamond studded color and carried directly into a bistro to sit in a little chair and eat pate. 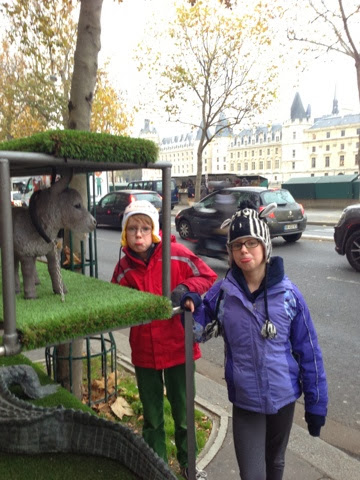 By the way, in France, Frozen is only about the princesses, not the wacky snowman. 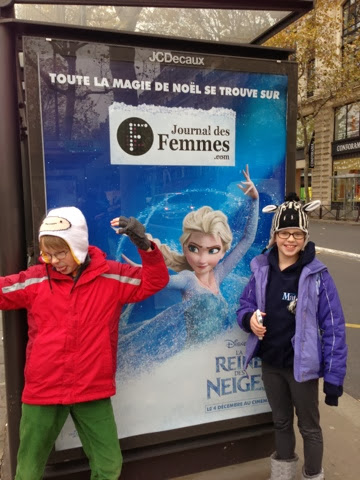 And, then, there it was: the Seine. 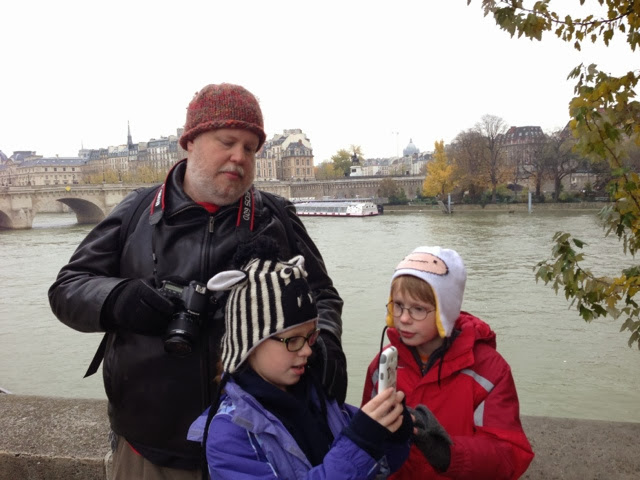 We walked down the ancient cobblestones to get right up to the river that defines Paris. 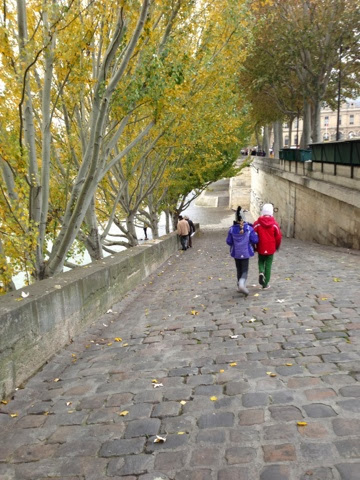 We crossed the famous Pont des Artes, which has become the bridge of love locks: padlocks left by lovers to symbolize their lasting unions.  Every lockable inch, from bridge to lights is covered in locks, so many they’re regularly clipped off by officials because they’re weighting down the bridge.  Sadly, some love is not meant to last: one fell off in Ned’s hand 🙂 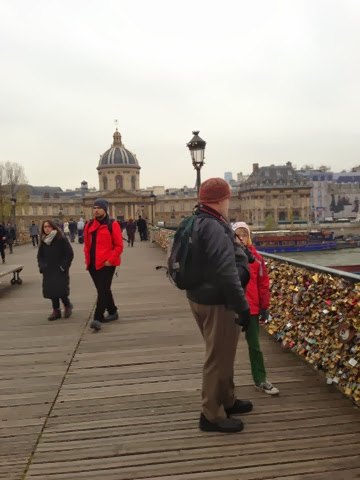 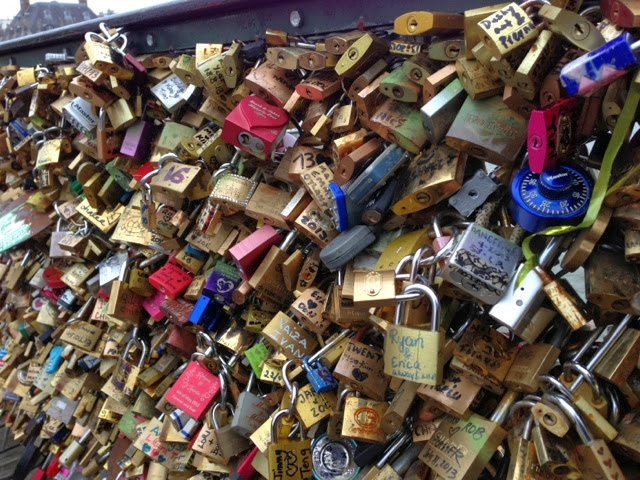 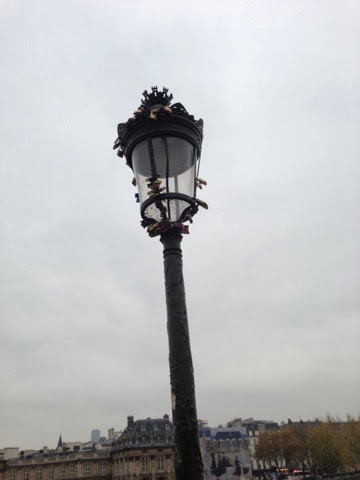 Because of the symbolism, the bridge has become a great site for wedding portraits.  And, we stumbled upon one. 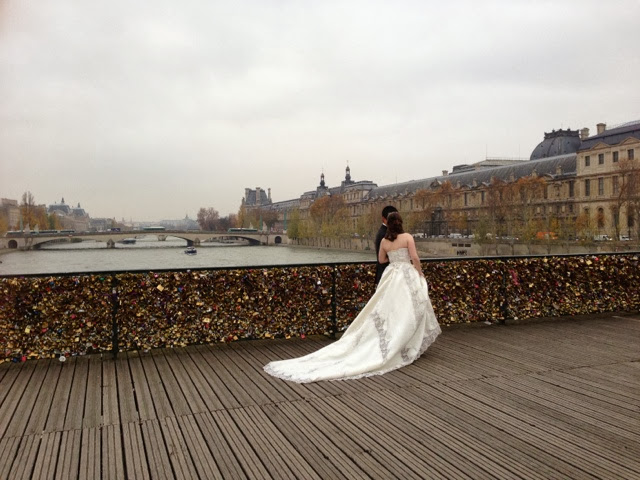 From there, we set off on a meandering path for the Musee D’Orsay.  We walked past cute and chic shops selling antique bureaus and ornate mirrors, ultra-modern bathtubs, crazily high end children’s furnishings including a bright red toadstool table and a hand knit faux bearskin rug, and bespoke men’s clothing that called to Penn’s sartorial soul.  We ate some more crepes.  (I think France imports Nutella by the megaton.)  And, then, we found Vincent. 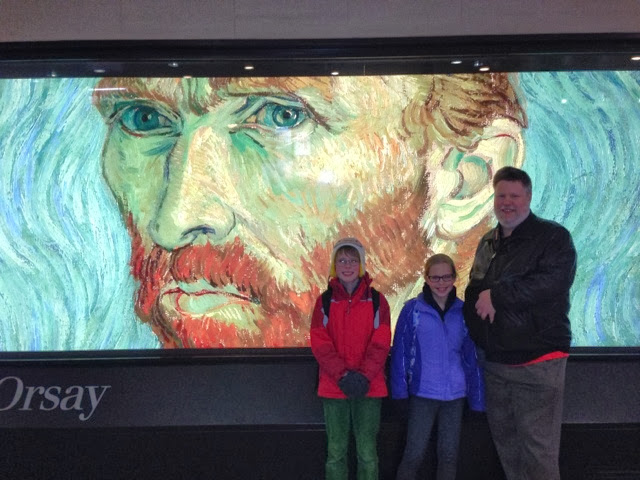 The D’Orsay does not allow photos, though as Ned observed, French people don’t care and took them anyway and the guards weren’t that interested in stopping them.  Nevertheless, I did not take pics of the exquisite collection.  Two high points:  Penn found The Church in Auvers-sur-Oise from the Doctor Who episode “Vincent and the Doctor”; Harper found The Little Dancer of 14 Years.  And, we realized we had seen several of the paintings in the Impressionist collection earlier in the year in Chicago.  We’re so cultured 🙂

The museum was once a train station, so it’s architecture is striking with huge clocks that recall movies like the Hudsucker Proxy and (perhaps more contextually fitting) Hugo.  Magical! 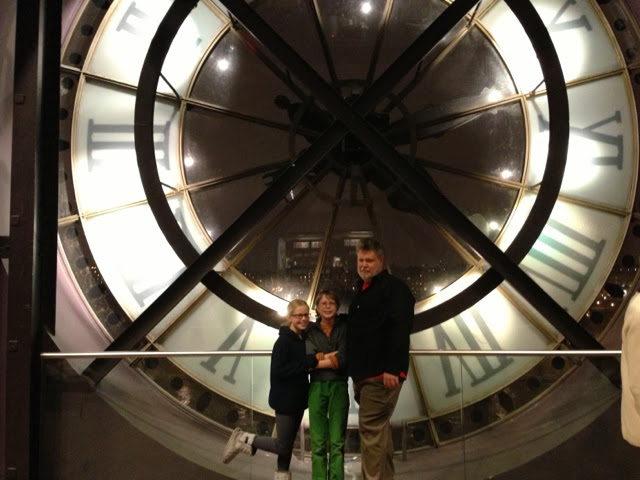 In the distance, you can see the Place de la Concorde. 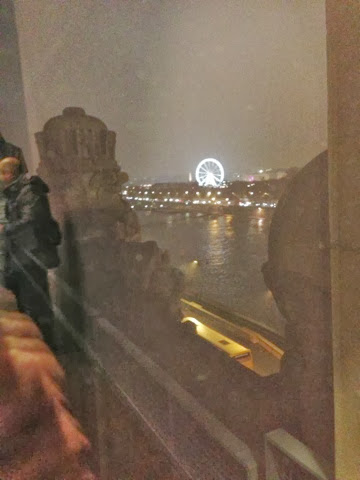 We grabbed dinner at the museum (see proximal eating above), which meant our Thanksgiving dinner included pasta carbonara, pasta pesto, croque monsieur and creamy woodland mushroom soup with marscarpone cream.  Take that, pilgrims.  We hopped the Metro to the Eiffel Tower, which glowed eerily in the misty night. 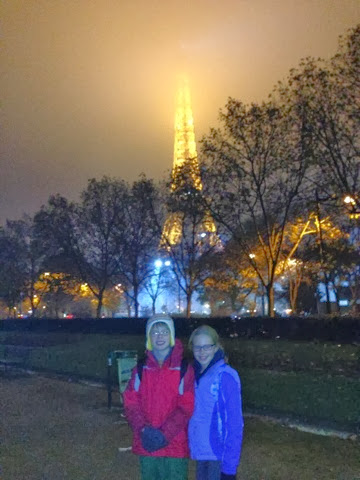 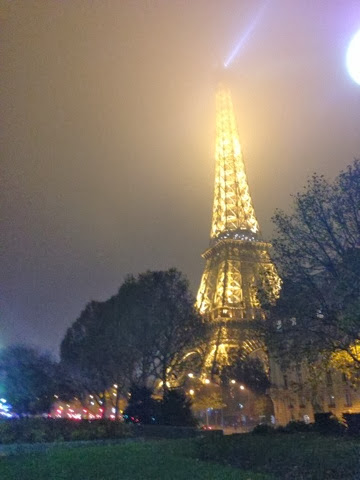 The surrounding mist also gave the golden lights on the tower some weight and menace, which was very cinematic; it looks like I’ve put a filter on the camera.  Je suis une auteur 🙂 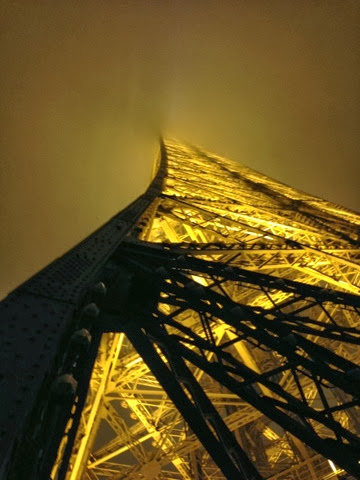 The hourly sparkle lights as seen from directly below the Tower. 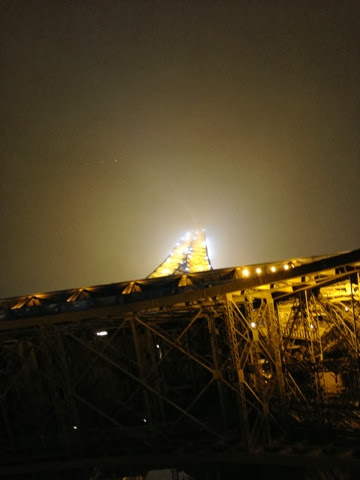 Another upshot, this one from the second floor. 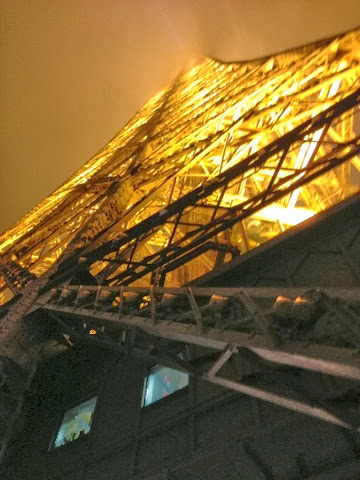 On the way home, we stopped for late night … pizza!  Pizzawawa was just across from our hotel (see proximal eating, again).  As one would expect, it’s a delicious, affordable Italian wood fired pizza restaurant in Paris run by an affable Irish pub owner.  Seriously, if you want pizza in Paris, this is the place to go.  And, then, just about 20 hours after it began, our first day in Paris was over.  Bonne nuit!

Here’s where I’ll add an observation: Paris feels old and weighty in a way that London doesn’t.  That plays out in multiple ways.  One is the architecture: the beautiful heaviness, the stacking layers, the forcefit of new into old in which the old never gives way.  Another is the “unstreetlike” streets that always seem to be either way too straight, fast and broad or way too crooked, fast and narrow.  The unchanging culture is yet another: banks that close for lunch, restaurants that define when one eats and one doesn’t, service that forces languor.  All of that is super cool, but one aspect is not, and it’s noticeably grown in the decade since I last visited the City of Lights.  While this blog isn’t really the forum to go into great depth, I’ll simply say that London seems more New York-y in how it has incorporated its significant, diverse and growing immigrant population; neither city gets a blue ribbon, but both seem to have done better than Paris.  More than once in Paris, I was reminded of a unique turn of phrase I heard in Germany recently; leaders there repeatedly described their country as “not having a welcoming culture” when it came to integrating their immigrant workers into German society.  I don’t think that stopped at the border.