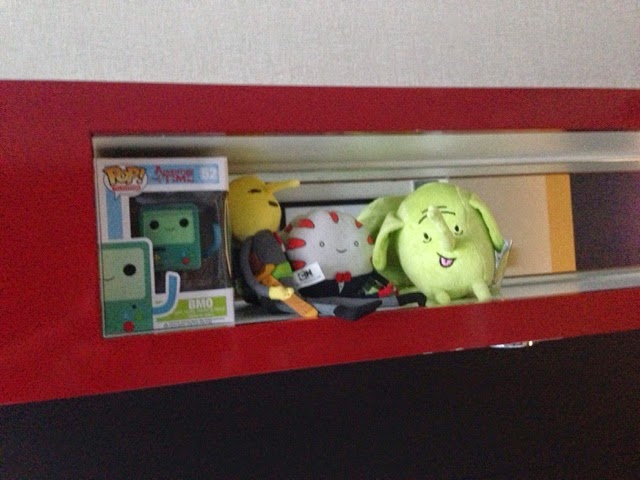 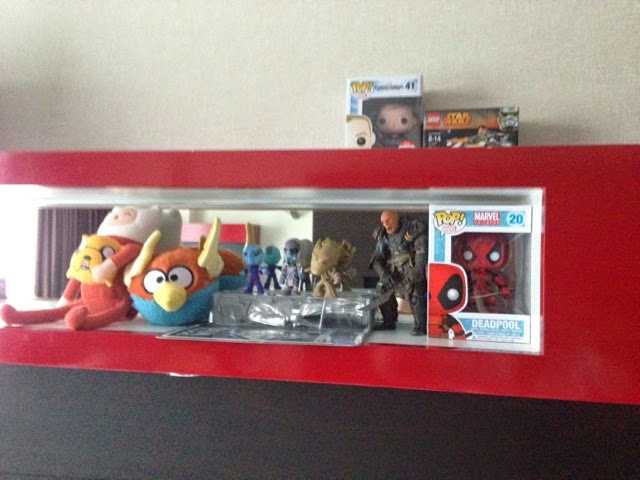 I am the breakfast gatherer at FE.  This year, we switched it up from our usual Fairmont and stayed at the Hyatt because I grew a little tired of the limited food choices in that area.  Our hotel has a Starbucks on site, which made breakfast pretty darn easy.  So, filled with baked goods, oatmeal and latte, we set off.  Ned proudly wore his Jayne hat, Lumpy Space Princess glasses, Ice King tattoo, and “I Am Groot” shirt.  Cosplayers, beware! 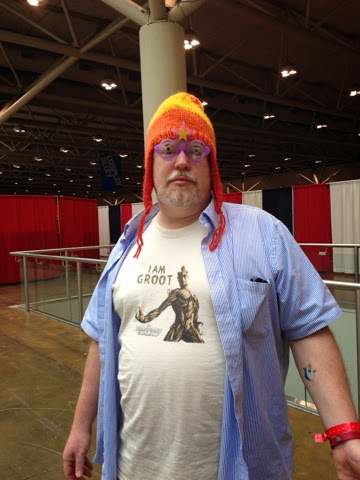 We had learned on Thursday that the only way to get the Fan Expo special LEGO set was to get one of the ~200 tickets distributed each day at 10 am as soon as the Expo opened.  That meant rushing to the back of the hall first thing.  We just made it.  I got ticket 196, and Ned got ticket 202.  Then, we waited.    Going to FE means a lot of waiting, which is made better by excellent people watching prospects.  Here’s one person worth watching … 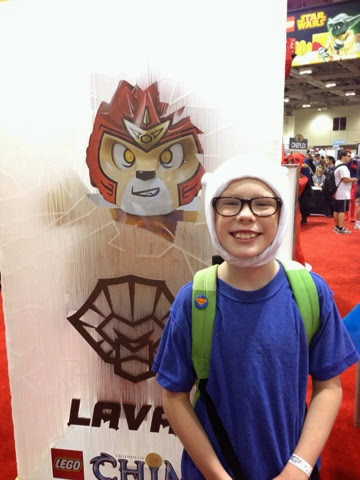 While in the LEGO line, we also learned that one could get a ticket for a free Batman LEGO minikit by playing the LEGO Batman game across the hall at the WB Booth.  So, we separated: Ned took Penn thataway; I took Harper thisaway.

We waited to spin the Peppermint Butler wheel in the Adventure Time Castle, and saw an awesome LEGO Starfleet member (a red shirt, though, so he’s not long for the LEGOverse). 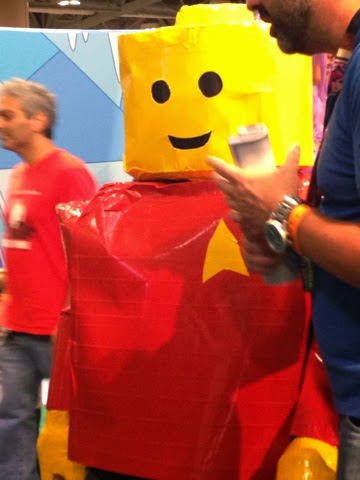 We had made plans to meet up at the Space Booth around noon.  Why?  This year, FE did not give out lanyards with their passes.  I picked up some free ones at a booth staffed by the Canadian equivalent of the NSA, which was recruiting at FE.  But, Ned felt uncomfortable walking around with a microchip tracker.  Sigh.  We saw people walking around with Space Doctor Who lanyards (Space is SyFy in Canada); they were cool but only given out at specific times during the day.  All of this is why, Harper and I lined up with a growing group around noon to get free lanyards.  It’s as exciting as it sounds 🙂 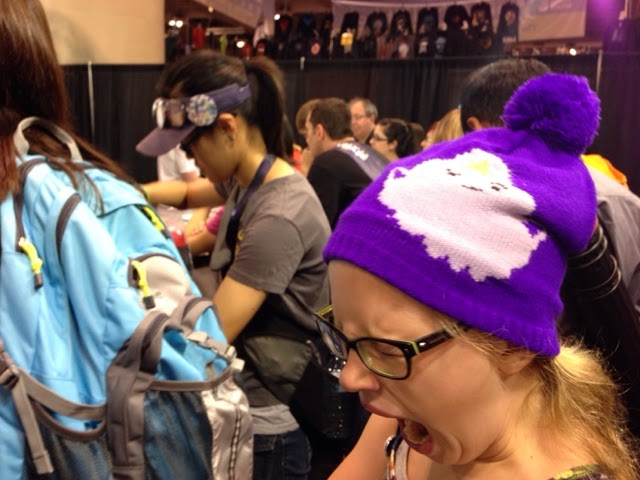 But, seriously, see how far back the bearded guy is?  We took this selfie when the crowd was only half gathered.  Somehow, in the end, Ned and Penn found us and we all managed to get lanyards.  That’s how we do. 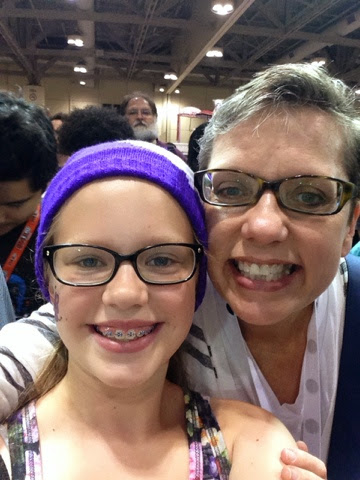 We then set off to avoid the mid-day FE crowd and to grab some non-Convention Center pizza lunch.  We saw this guy … whose costume was so big, he needed to take the elevator.  Commitment! 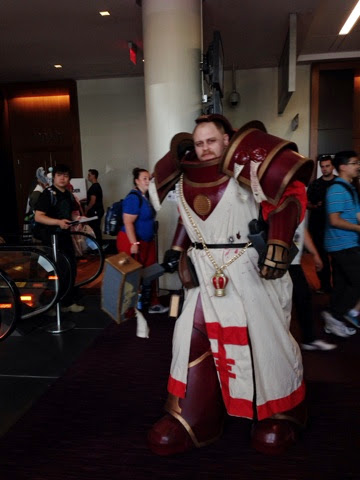 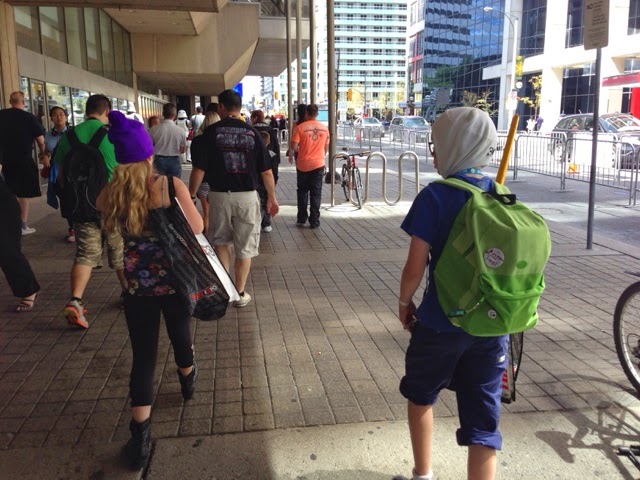 After a great Indian buffet lunch (where we sat at the same table as last year and the owner remembered us!), we took a swimming break.  The pool at the Hyatt is on the roof, and from this vista, I could see 11 cranes building even more density in Toronto.  It’s just crazy! 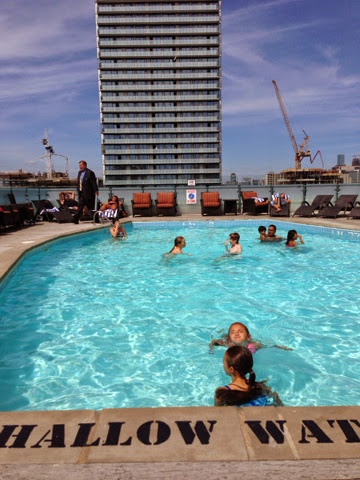 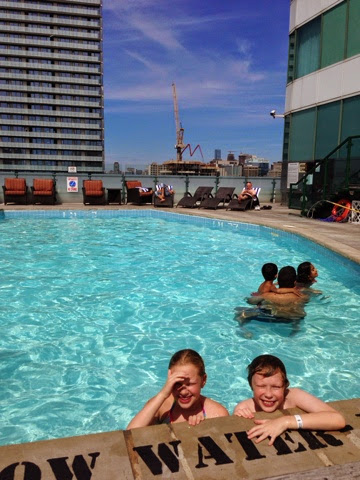 Refreshed, we headed back to FE later in the day for a few more hours.  It was clear that everyone was in a great mood, as exemplified by Edward Scissorhands dancing it out with Disco Storm Trooper. 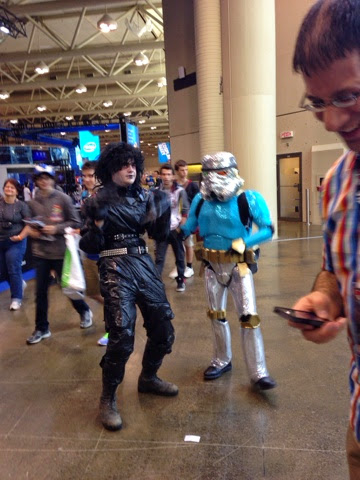 FE runs for four days.  Thursday has a solid crowd but there’s still lots of room in the aisles.  Friday begins to build significantly.  When we went back in the late afternoon, the crowds were still there. 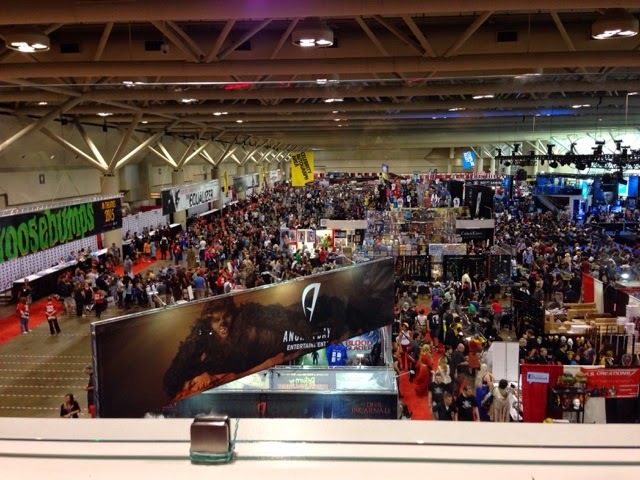 But, they had started to leave–which always creates fun on the escalators.  We’re on our way in, but notice how many folks are on their way out.  Again, going to FE means a lot of shuffling and waiting. 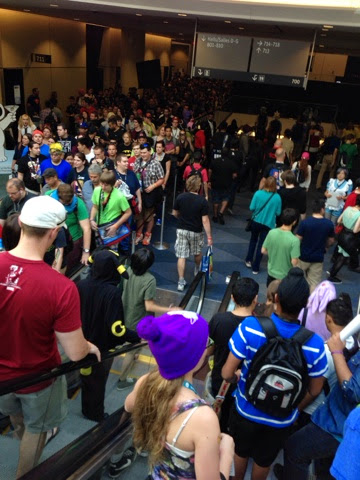 The kids and I broke off from Ned.  He went to see a sneak peek at a new episode of The Strain.  However, this was subbed with a preview of Scorpion, a new fall show that is very much NOT the Strain.  Still, he stuck it out.  Since the lines at the Disney booth were nonexistent, we decided to get in some gaming. 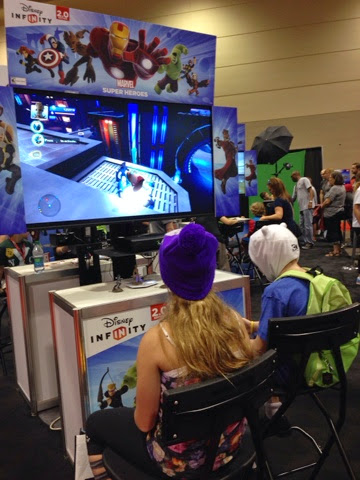 After that, we started shopping, finding some decent deals when we showed the ability to buy multiple Pop Vinyls and Adventure Time plush.  In fact, we were so excited by the AT plush, that the guy gave us a decent deal and then threw in a Gunther 🙂  Wandering around, we discovered a few places that still had Guardians of the Galaxy figures.  Harper lucked out and got a small Groot (which she kindly gave to her brother as an early Christmas stocking gift).  Perhaps as a reward from the FE gods, she then found a booth selling Tardis UGG-knockoffs.  Sold!

Exhausted by all of our shopping success, we plunked down with some of our Roasted Chicken potato chips and sodas. 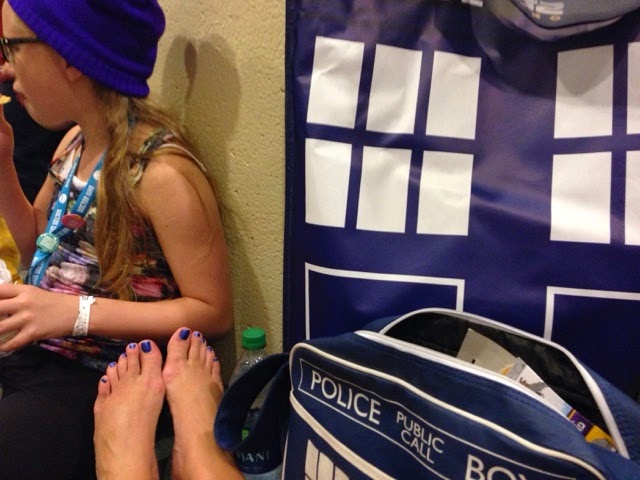 We were in the middle of cosplay heaven, including a plethora of princesses. 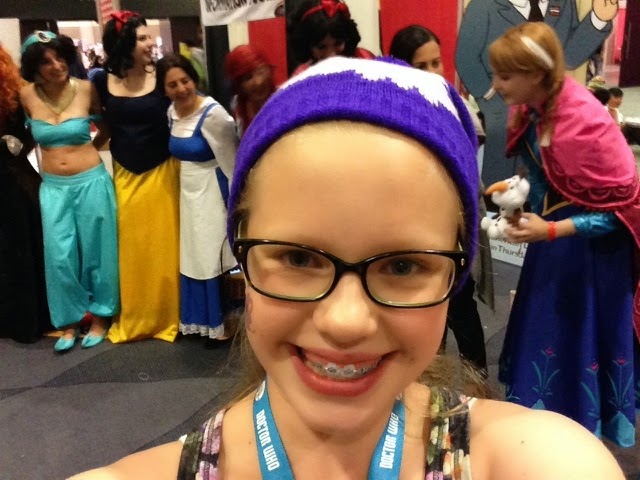 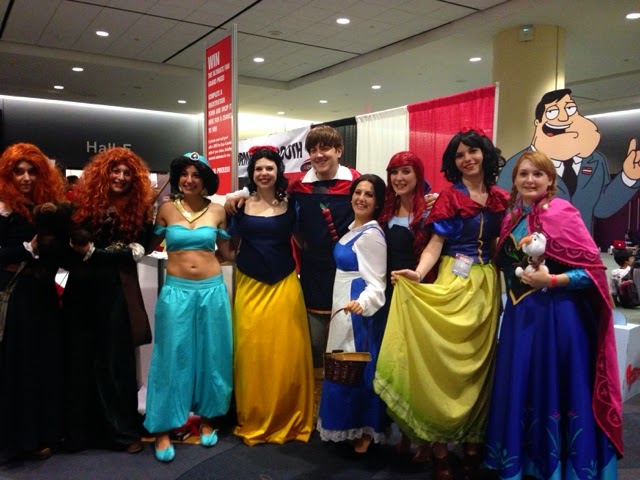 And some Game of Thrones-ers.  This led to many “Andy Samberg as Joffrey” impersonations in our corner.  Nothing beats people watching at FE! 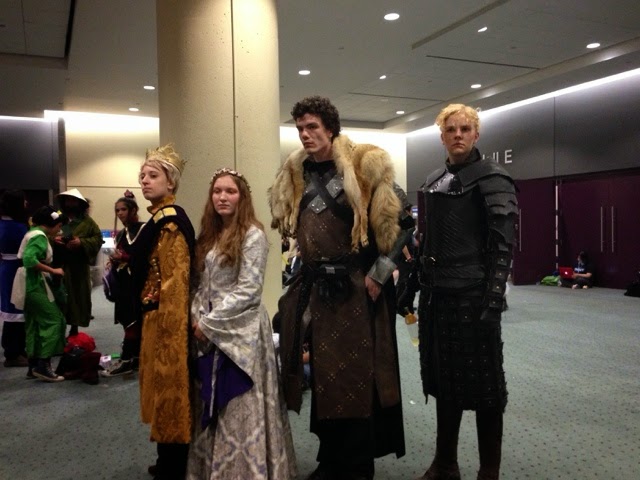 On the way out, we learned that Karen Gillan had dropped out of the Doctor Who event, which made us want to drop out of our tickets.  As we negotiated that at the Special Events booth, Emperor Palpatine and Lord Vader showed up.  The Emperor kindly straightened Penn’s hat before we took the picture.  See, everyone has a little good in them, even evil overlords! 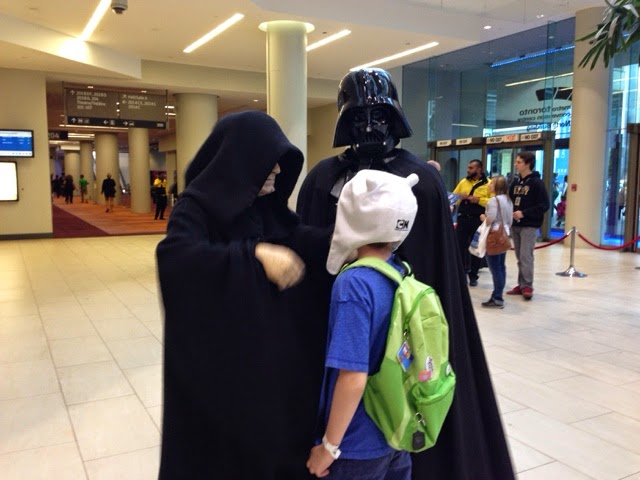 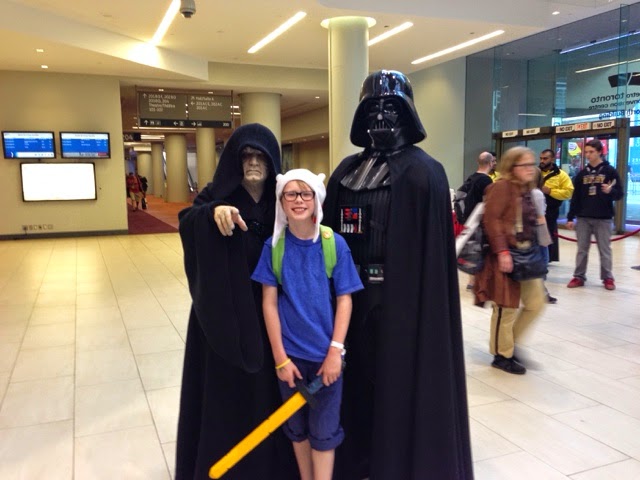 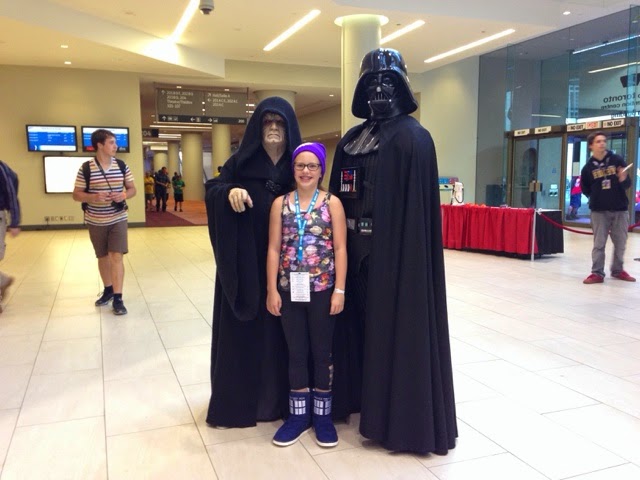 And, with that, we had closed out FE for the night. 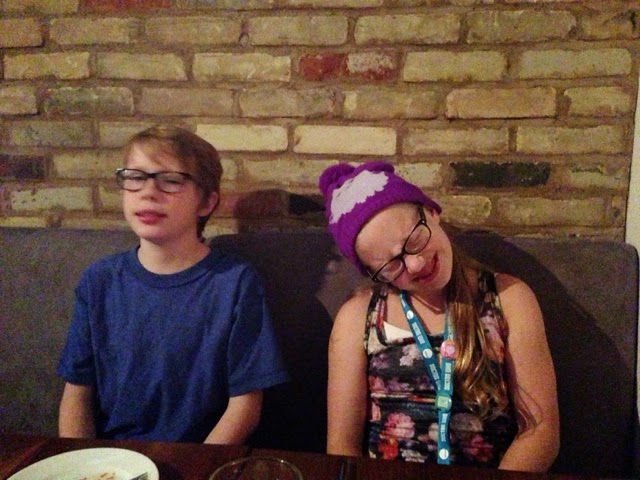 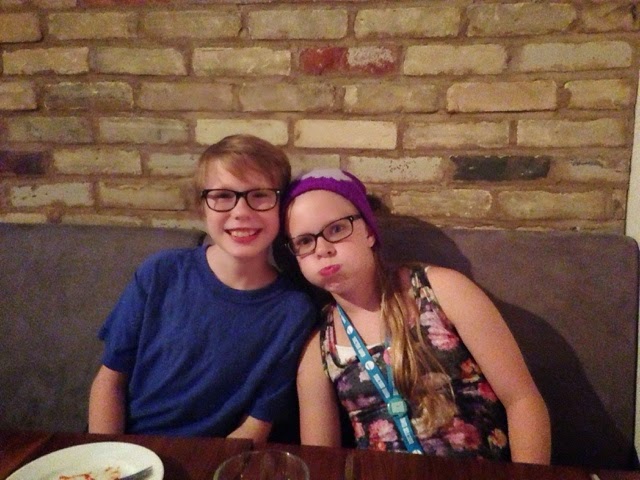 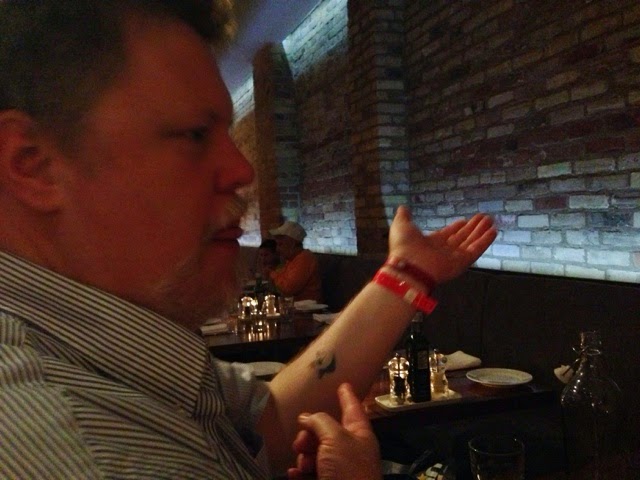 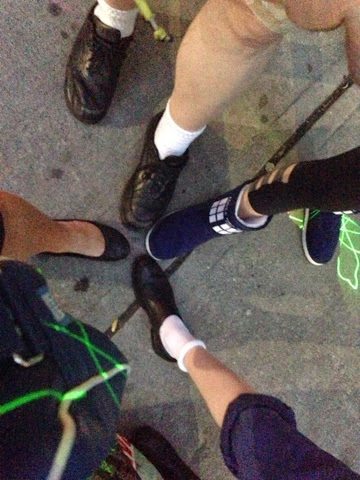