We were starting Saturday on a bit of a bummer: Karen Gillan had canceled her attendance at FE, so we cancelled our attendance at the Doctor Who event.  We had already seen Matt Smith at the Doctor Who Anniversary, and realized we could take that money and buy NYCB Nutcracker tix with it.  (Well, really, I realized that; I’m still not sure everyone’s in on that plan yet.  But, give me time!)
Still, when you wake up and find your Princess Bubblegum temporary tattoo has transferred itself to your hand, you know it’s a sign of something … either that, or I didn’t properly wash my face Friday night and slept on my hand.  Six of one; half a dozen of the other. 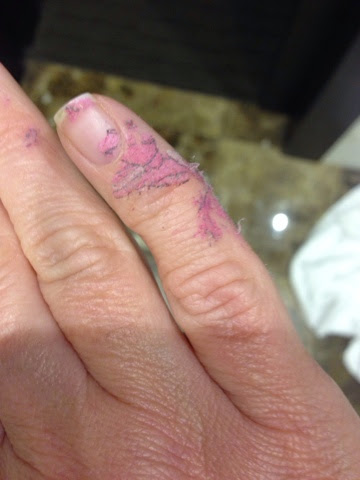 I’m going with “sign of something,” so c’mon grab your friends, we’ll go to very distant lands” … which in this case means up a couple blocks to the Convention Center.  Dressed as the cutest Finn and Fiona at FE! 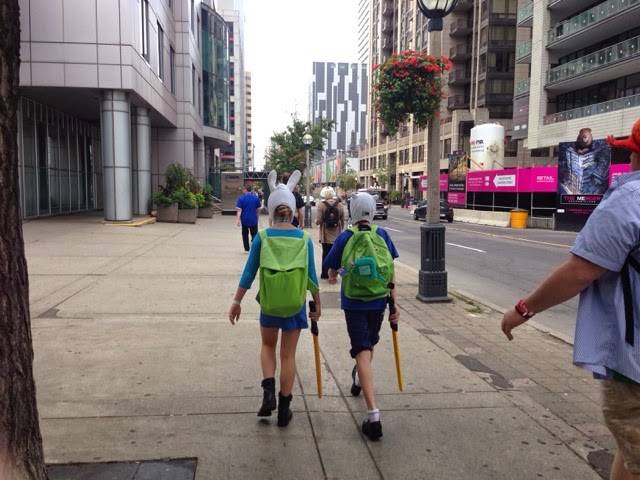 Shepherded by the scruffy guy in the Jayne hat and “Algebraic” shirt.  (Side note, our hotel was buy the Bell Lightbox theatre, and folks had already started sleeping out waiting for TIFF single tickets.  It was interesting to watch this line grow–very much not a typical sleep-out-for-tickets crowd.) 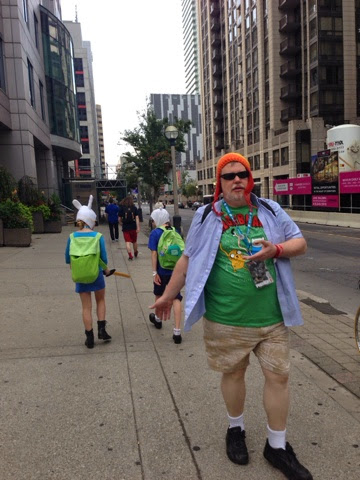 Our first stop of the day was the Nathan Fillion Q&A.  He was remarkably entertaining last year.  Fillion draws the fanboys and fangirls like few others and fills FE’s Constitution Hall, 28,000 square feet.  We were happy to start our Saturday! 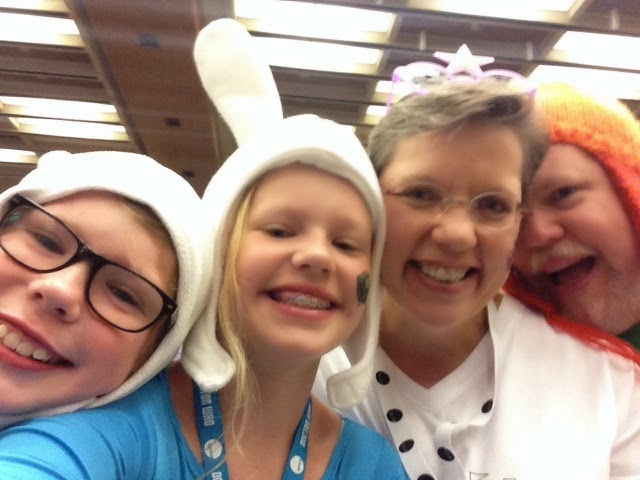 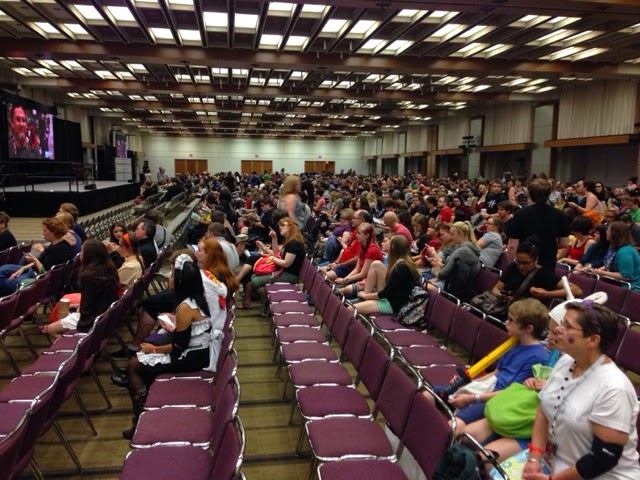 The crowd was so impressive, we were droned!  It was odd to see thousands of cameras filming a camera filming us.  As the drone flew by, it left a nice breeze, or as the guy in front of us put it: “What a refreshing invasion of privacy.” 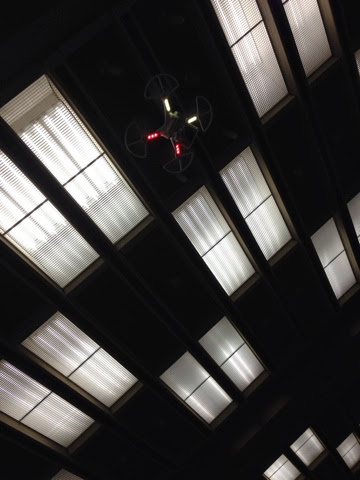 And then Fillion took the stage for and hour plus of Q&A. 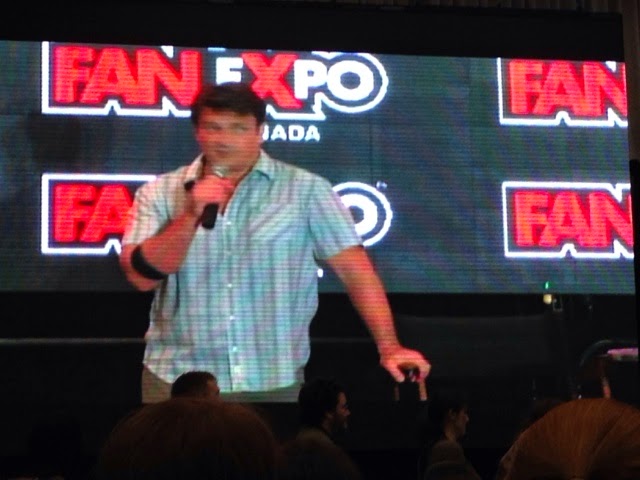 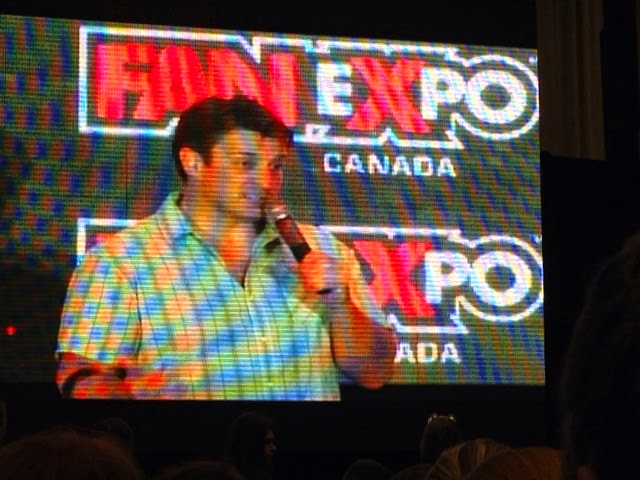 More of Fillion is always lovely, but we had to get from North Building to South Building to snag a place in line for our “must-do” of the day: an Adventure Time screening with the voice actors behind Princess Bubblegum (Hynden Walch) and Jake (John DiMaggio).  Saturday is the most insane day of FE:  more than 100,000 people at any one time.  As we tried to push through the crowds, one of the Fan Expo “Minions” (as in Despicable Me minions) gave us a hint: go outside, run around the Center, and save about 30 minutes.  Done!!  We made it in time to be in row three–guaranteed to get inside the room!  Then it was time to wait about 90 minutes … lunch time! 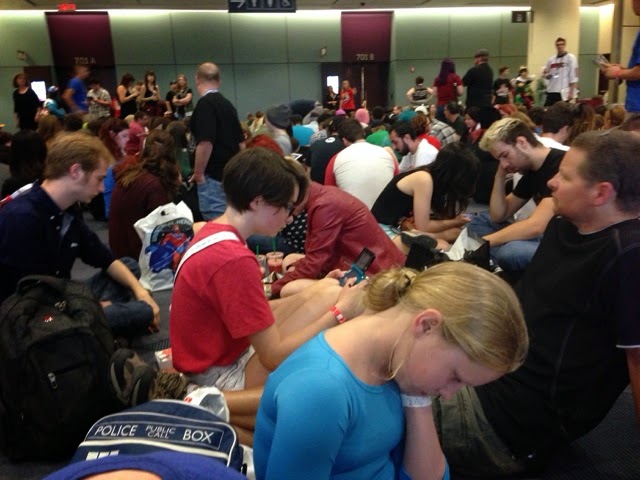 Here’s a panorama of what the line looked like when I got back with our pizza and drinks.  FE had seriously underestimated the love of Adventure Time and had to double the room size.  Mathematical!

No surprise that this panel drew some great AT cosplay.  This couple was among the best.  Our kids were, too.  They had their picture taken twice by the Canadian network Teletoon, and I just found one of the pics on the Fan Expo Facebook page. At last year’s FE, we saw a set of episodes curated by Pendleton Ward himself with a cute video intro.  We also walked away with some sweet door prizes: a Finn hat, a set of AT dvds, and some AT Mad Libs books.  What could top that?  Well, this year, the panel took only three questions, and one came from Penn!  He asked John DiMaggio how it was different to voice act “Jake” and “Bender.”  Here’s DiMaggio answering.  (By the way, it is both cool and weird to hear these character voices coming out of real people right in front of you.  Especially when they slip in and out of character(s).) 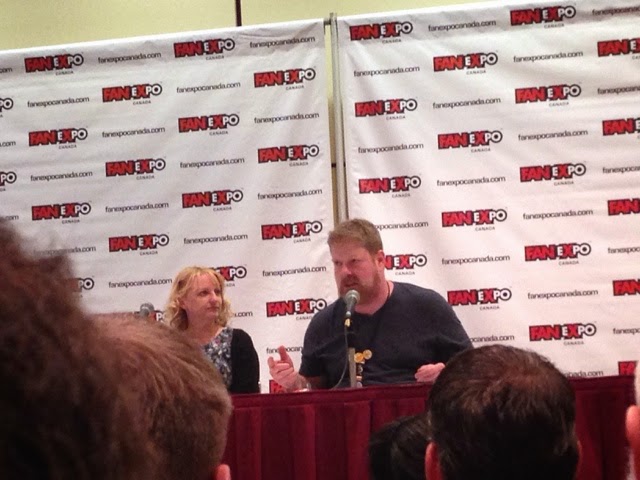 Sadly, we did not win the raffle this year, but the prizes were AT Monopoly games (yep, we got that already).  Then, as we were leaving, the Teletoon host advised anyone with a purple raffle ticket that they really were winners … both Walch and DiMaggio would be available to this group only for a special autograph session.  Guess who had a purple ticket?  Me!
We immediately purchased PB and Jake Pop Vinyls and then wandered over to the Teletoon booth with our magic ticket and right into another long line.  But Finn and Jake showed up, and since we were right next to a giant Dance, Dance Revolution contest, there was plenty o’ time for dance, dancing!
Walch and DiMaggio couldn’t have been nicer.  The official purple ticket rules were: one person per ticket, one item signed per person.  That item was really supposed to be a Teletoon AT poster.  They let both kids come up with one ticket and two Pop Vinyls and both signed both, chatting with the kids at length.  Walch even asked me how to get the temporary AT tattoos we were all sporting.  Then, DiMaggio added a little “fart” on Jake’s bum to Penn’s delight. 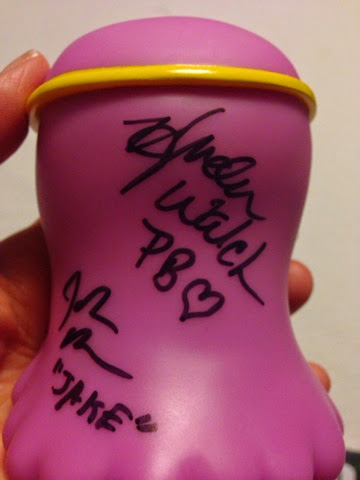 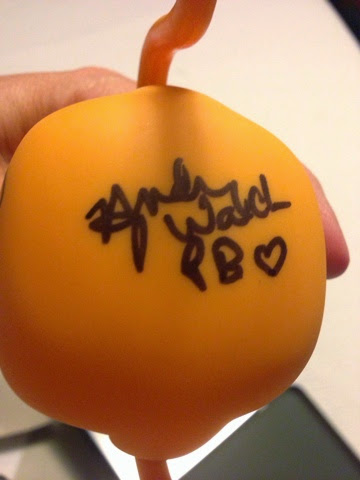 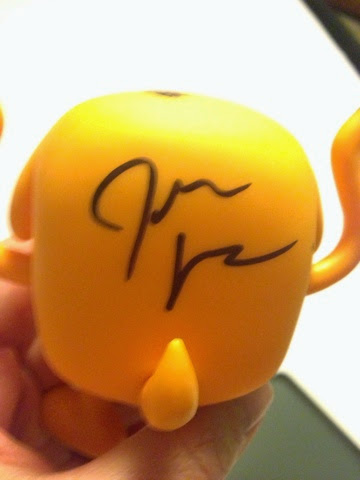 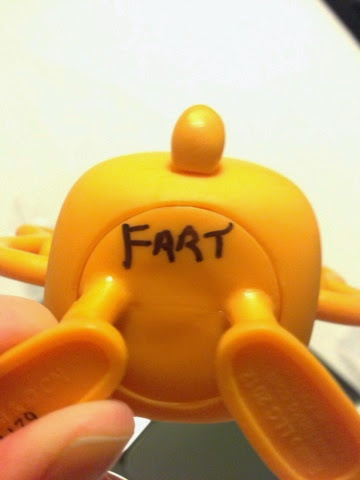 We were apparently so entertaining in line, that the Teletoon folks came up and asked us to shoot a commercial.  You don’t need to ask us twice!  We actually sang the whole BMO’s Pregnant Song on camera, which was probably a bit “too Fan Expo” for TV, but we also hit all their talking points like pros, including their catch phrase (“Only on Teletoon), which will certainly see the light of day.  If you’re in Canada, look for us beginning in October.

We took off then for dinner.  It was a Blue Jays’ game day, so the Canteen at the Bell Lightbox had a blue corn dog special.  Dinner decision made!  I found a cute Benedict Cumberbatch “colouring” book at the TIFF shop and couldn’t pass it up. 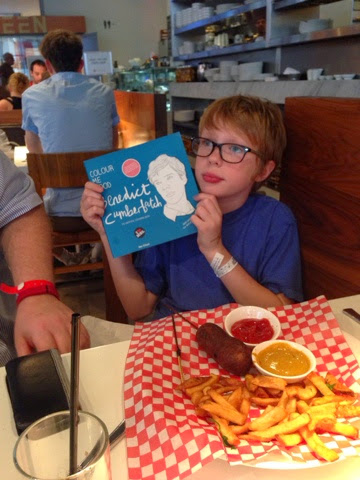 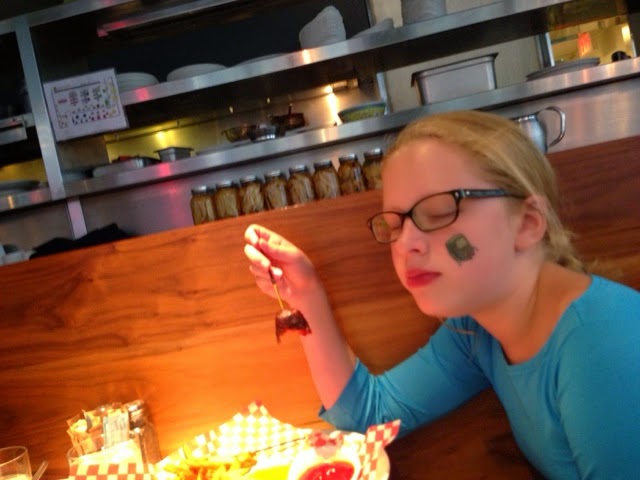 After dinner, we traded clothes and went back for the night’s big cosplay event, the Masquerade, and ran into some of the ubiquitous Dead Pool cosplayers. 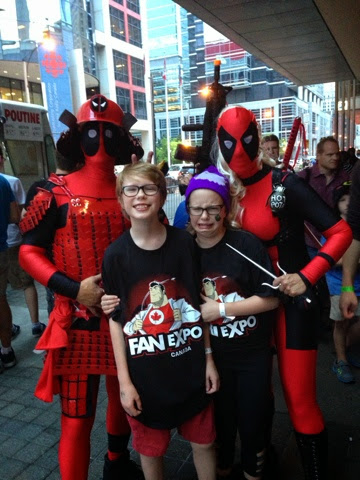 And, this adorable Avatar. 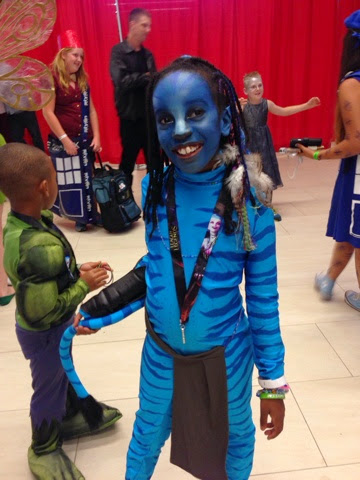 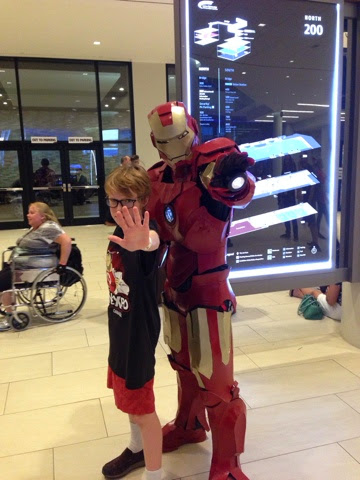