Wednesday morning, we started with our courtesy breakfast, which was yummy.  Plus, big points to our server, who when told why we were getting a comped meal responded, “Seriously? Jesus Christ!”  Love it 🙂 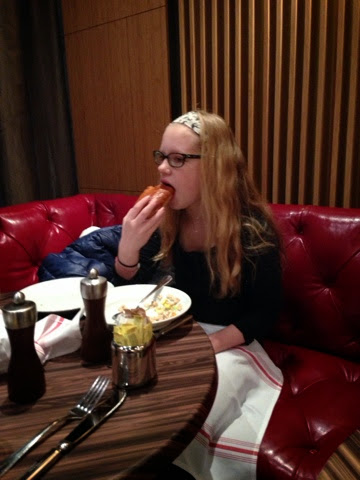 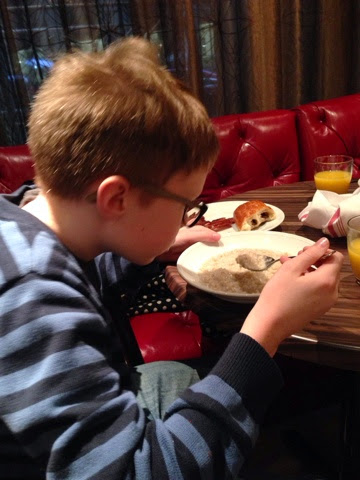 We set off for MOMA to catch the incredible, inspiring and just gobsmackingly lovely Matisse Cut-Outs exhibit.  It was already raining when we left the hotel, and it quickly turned to slushy, frozen rain. Coupled with the holiday week, this seemed to drive everyone and their extended family into the museum.  Rather than fight every line, we opted to support MOMA by (once again) becoming members.  Problem solved!  BTW, the last time we joined, it was triggered by the Tim Burton exhibit mob scene, again at the holidays.  Needless to say, MOMA was delighted to welcome us back. 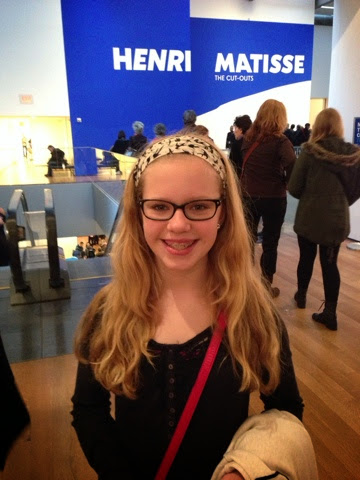 Here, Harper and Penn watch a new installation, “Let’s all go to MOMA the day before Thanksgiving.” It’s a moving commentary on the intersection between art and life 🙂 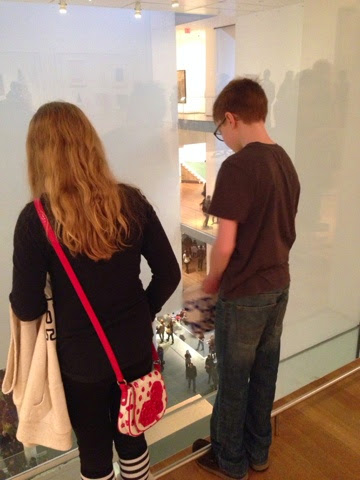 As everyone crammed into the Matisse exhibit, the other galleries were actually filled with some precious breathing room.  I’ve realized I’ve hit the stage in my life when I no longer snap photos of art but take pictures of my children snapping photos of art.  Here’s Harper taking a photo that immediately became her new screensaver. 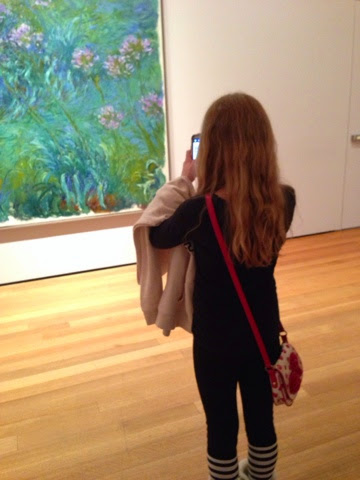 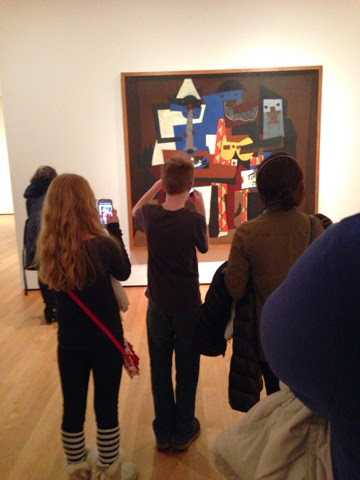 And, Penn brought to a standstill by “Starry Night.”  Ever since the Doctor Who episode, “Vincent and the Doctor,” Van Gogh has been his favorite artist.  Penn marveled at how bright and light the painting is compared to reproductions.  What’s fascinating to me is that he’s seen the painting several times before, but it never made the impression it does now. 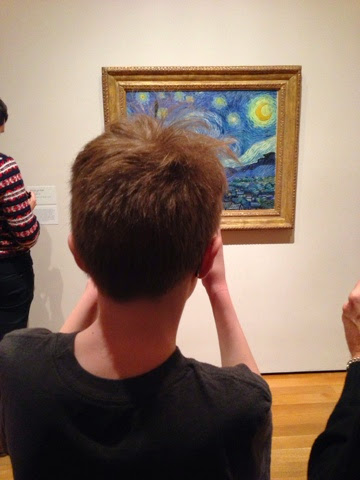 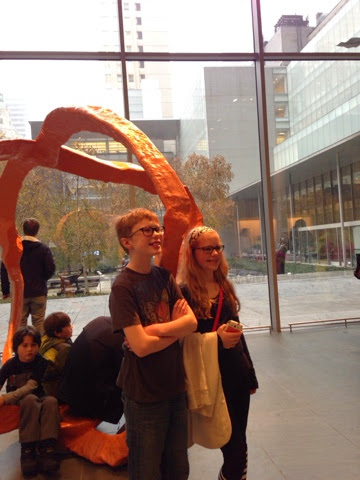 Seeing we could get half price matinee tickets to The Curious Incident of the Dog in the Night-Time, we slogged through the “snain”(snow-rain) to the TKTS booth.  We had just enough time to grab a quick lunch at the super crowded Starbucks next to the theatre.  Penn did some people watching … 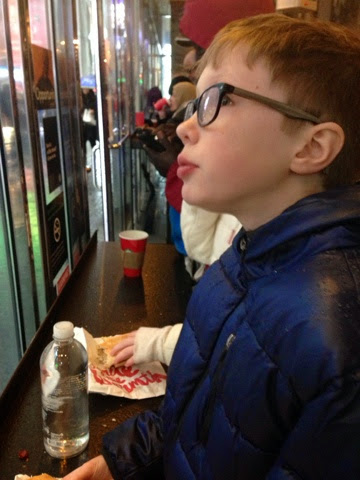 Harper realized she had accidentally begun to drink my coffee … 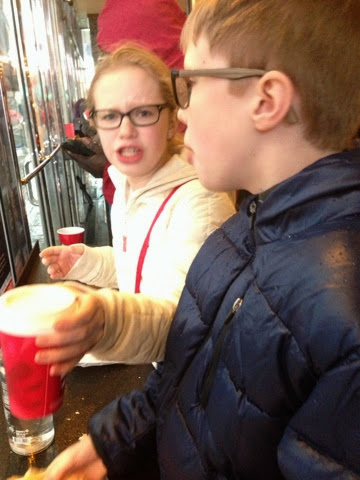 And, Ned enjoyed his turkey and stuffing panini … 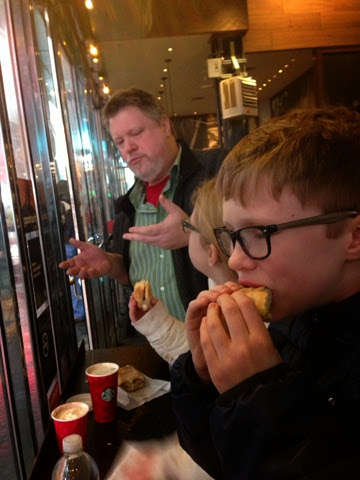 Our seats for the show were fantastic. 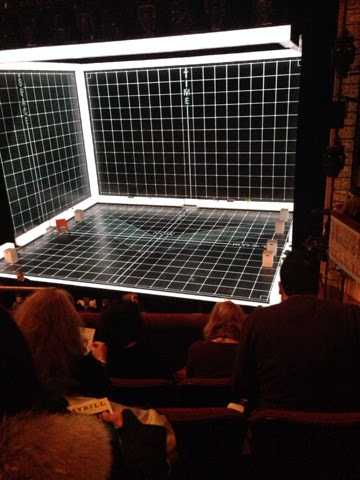 I had read the Haddon novel years ago, but neither Ned nor the kids knew what to expect.  Going in, they were a bit skeptical. 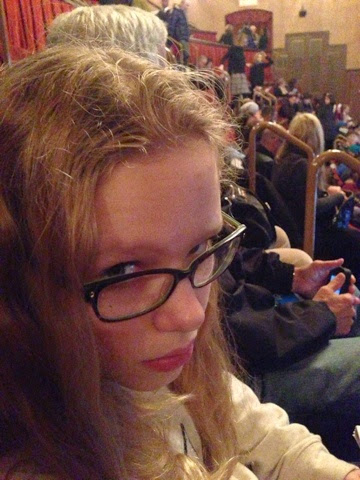 By intermission, everyone was completely wowed!  Truly, this show is simply remarkable: it somehow makes the most use of technology we’ve ever seen on stage while producing one of the most touching and complex plays we’ve ever seen.  The audience (including our row) alternately laughed, sighed, gasped, cried, and jumped to their feet for a standing ovation.  And, the encore involves the autistic protagonist, Christopher, sharing how he solved one of his A-level Maths problem, complete with a confetti finish.  Just perfect.  Penn pronounced it possibly even better than Matilda.  High praise! 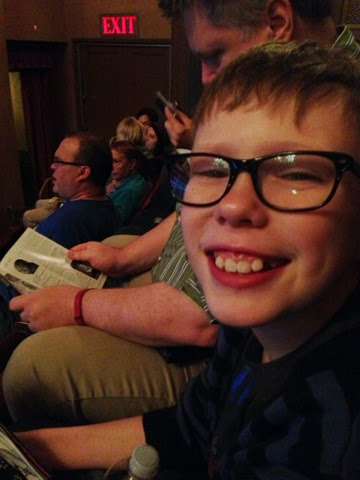 We ran back to TKTS to try to get tickets for either On the Town or A Gentleman’s Guide to Murder.  No such luck, which was just as well, since it meant that Penn got to lead us to the Discovery Center in Times Square for the Marvel S.H.I.E.L.D. exhibit.  This is the only photo we were allowed to take there; seriously, we had to promise not to take any, and a guy was actually run out of the exhibit for violating the order.  Don’t mess with Stan Lee and Disney, people. 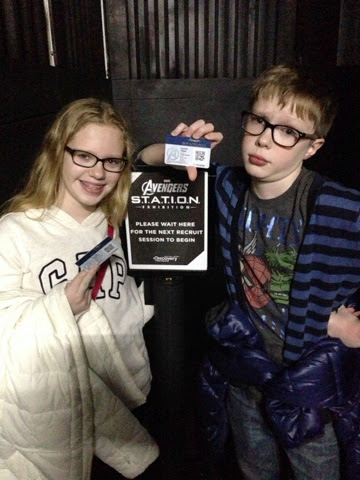 We were conveniently just up the street from the Times Square Shake Shack.  Even though it was packed to the gills with damp, frozen, and starving tourists … 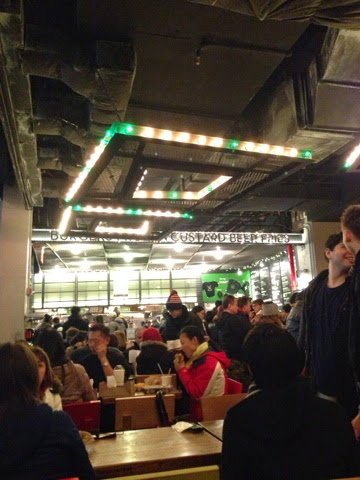 we put our well-honed table hawking skills to work and had seats within 5 minutes of ordering.  Don’t mess with the Kress-Davis clan at a Shake Shack: we will throw you down with a cunning cross-cut of shade and politesse. 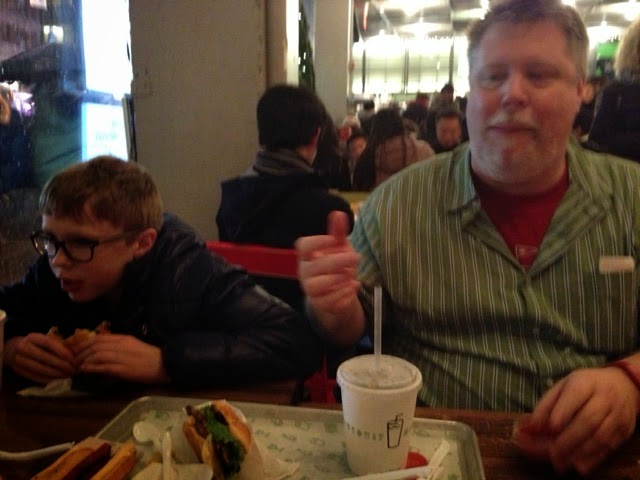 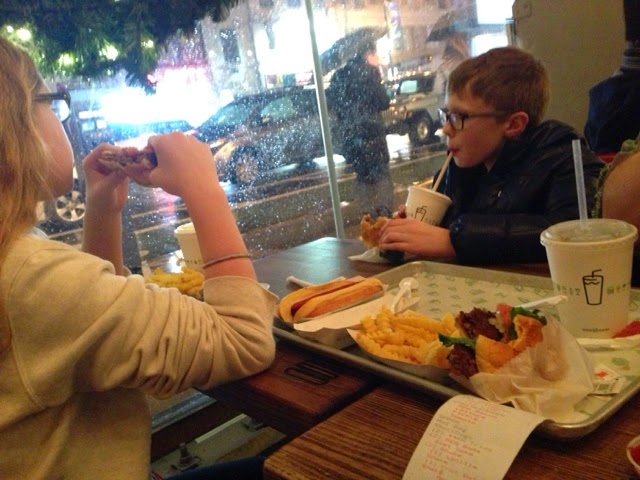 After dinner, we had to walk past Toys R Us on the way to the subway, so why not?  Did you know that they now sell Jose Eber beauty products at TRU?  Did you know Jose Eber is still alive?  Did you care?  Well, Harper now has a new ceramic curling iron thanks to a helpful TRU demonstration guy who somehow managed to turn her rain matted locks into these lovely curls in the middle of a bunch of Frozen dolls.  Penn was beside himself to find the limited edition LEGO Rocket the Raccoon minifig and a clearance Iron Man.  Happy Thanksgiving, TRU! 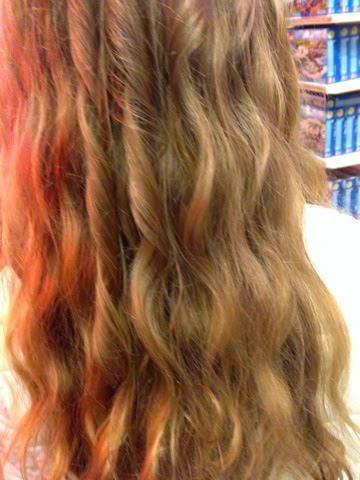 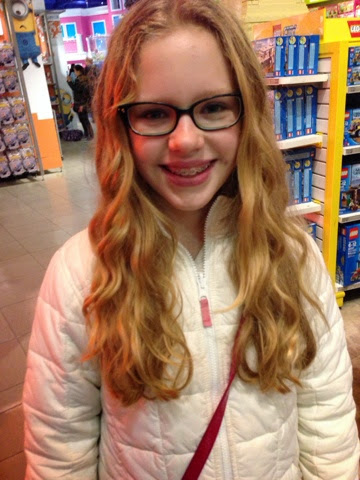 We made it safe and sound back to our hip lobby, complete with coffee, cookies, and apples … 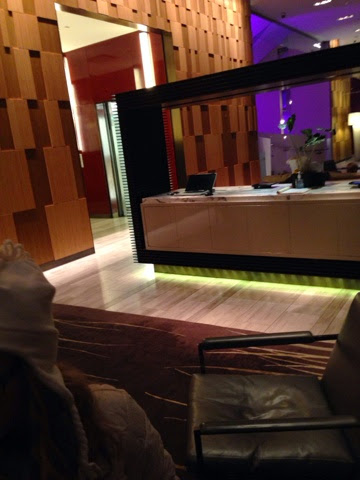 and called it a night. 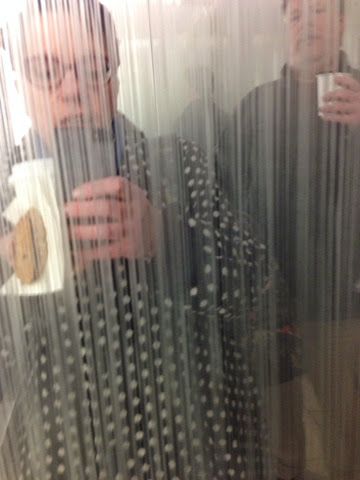 Early to bed, early to rise.  We have a 5:00 am wakeup call to get to the Macy’s Grandstand Line.  See you there!