It was the morning after Thanksgiving, and all through the room, most of the family wanted to sleep until noon. 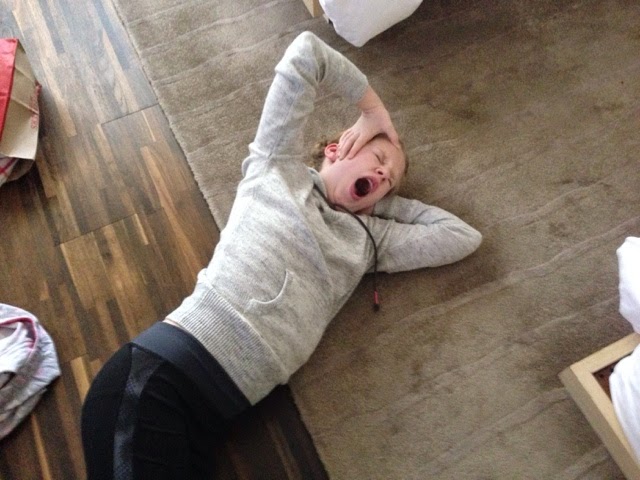 But, instead, we dashed away, dashed away, dashed away all … the way to the corner of the next block for some breakfast before setting off for the Lower East Side.  Two things I’ve never gotten to in NYC that I wanted to do this trip: the Tenement Museum and the Ellis Island Museum.  The latter is still being reconstructed after Hurricane Sandy, but I was able to book a tour of the former.  It’s fair to say no one–but me–was very excited by the prospect of touring a tenement.  But, they were being good sports. 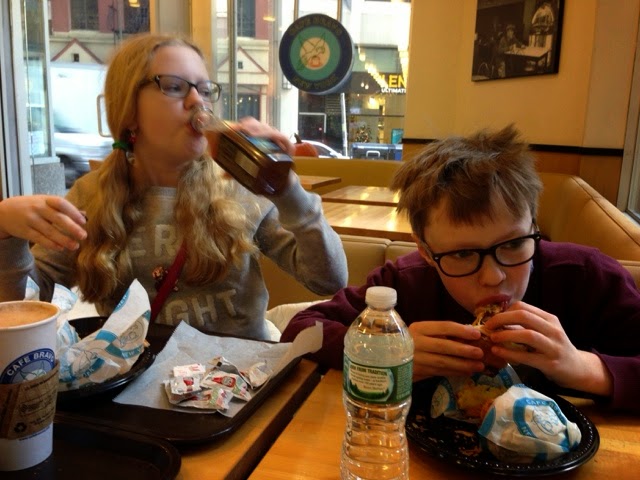 Since we were heading away from all the Black Friday crowds, the subway was completely empty, which enabled my monkeys to work up some energy. 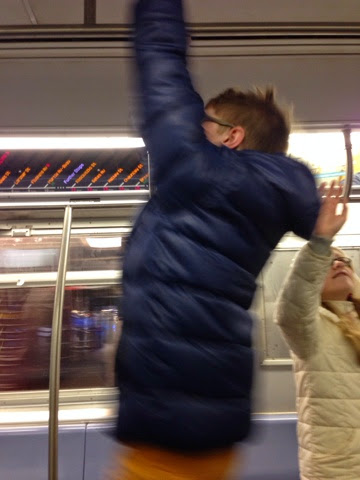 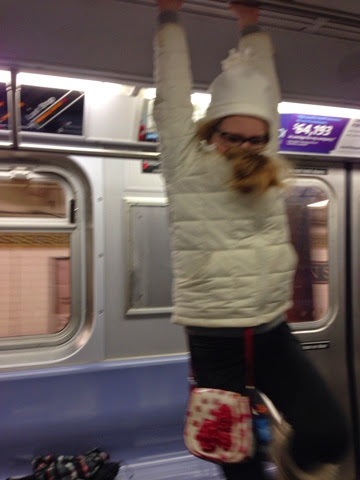 Our foray to the museum got off to a rocky start: we jumped into the long line on Orchard Street that we assumed was for the tour, only to learn that it was a line for a liquor store having some special Black Friday tasting of craft brews.  And we weren’t even in Brooklyn!
A few buildings up, we found it.  Any suspicions my family had that this was a lame home museum were quickly set aside by the enormous, bright, hip gift shop where we claimed our tickets.  The Tenement Museum doesn’t allow photos, unfortunately, because (as Harper would say) it’s amaze-balls.  I had selected the Sweatshop Workers tour which follows the lives to two of the hundreds of families who lived in the tenement: one who ran a five person sweatshop out of their family’s three room apartment in the 1890s; one in which four of five family members worked in a loft sweatshop.  The tenement is unrestored, leaving history literally on the walls and floors–where layers of paint and wallpaper and linoleum combine with period pieces and family mementos to reveal the stories, as told by an energetic and patient docent, Brendan.  We loved it so much, we’re going to book a different tour (an eating one, natch!) when we head back to the city in March.  Truly, the Tenement Museum is a surprising and difficult history come to life–go there!
Since we were in the neighborhood, we thought we’d run up the street to Katz’s Deli for a late lunch.  Turns out, we were not the only ones to have that thought.  The line ran all the way down the block, which meant we were standing right in front of the criminally empty Empanada Mama.  Lightbulb!  We decided to eat there.  Best decision ever!!  I had a huge bowl of rich, warm, comforting oxtail soup, and our empanada order filled two baskets.  So, so good. 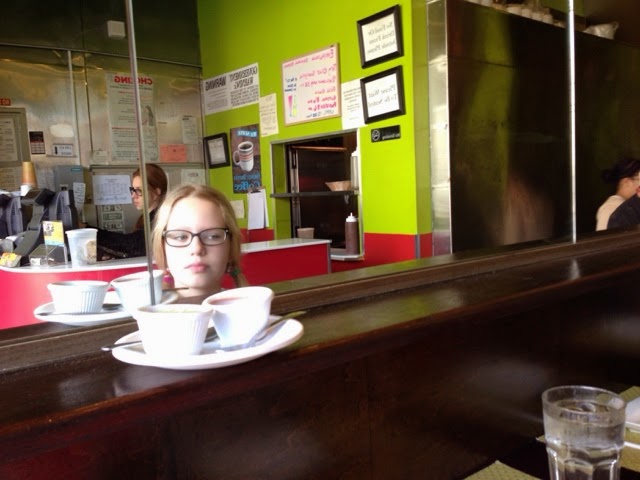 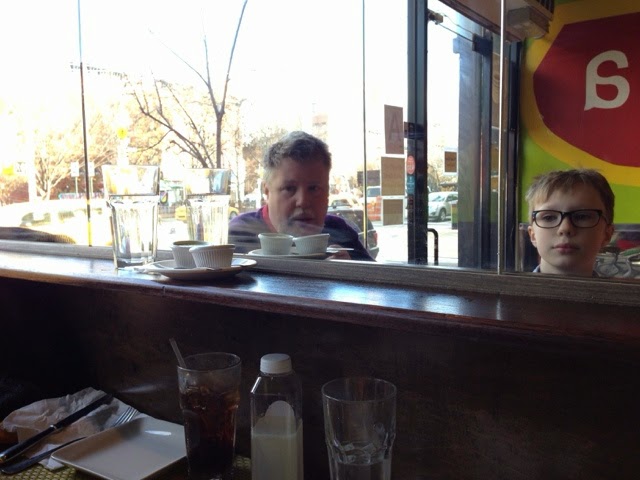 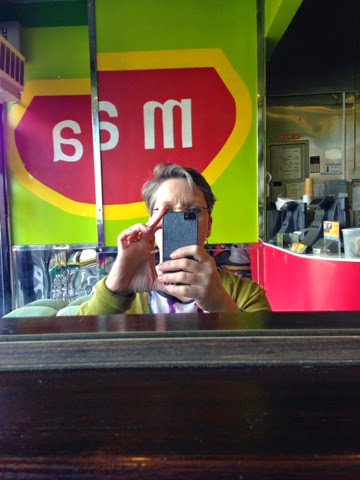 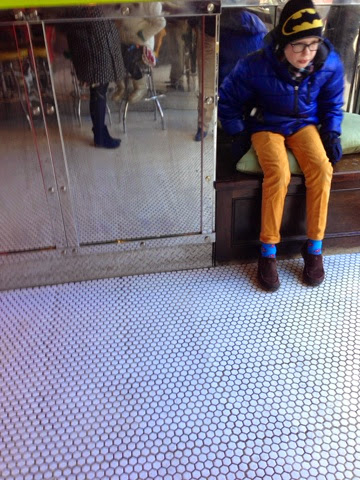 We started chatting with the two young women working the counter, who seemed especially glad we were there since business picked up once we arrived.  (Seems we’re among the few to cross the threshold of an empty restaurant without a second thought).  We capped the meal with a chocolate-banana empanada and a caramel fig one, which was a surprising treat.  Filled with knowledge, warmth, and sustenance, we decided to brave SoHo shopping on Black Friday.
We really had only one destination in mind: Harper wanted a new pair of Uggs for her birthday.  Even the wicked cold, crazy crowds, and rope line outside the store did not deter us.  Though we went only for Harper, once our lovely salesperson Paris offered us all bottles of water (sparkling or still) and spoke thoughtfully about why we should consider donating to the Boys and Girls Club with our purchase, I knew I had to buy some, too.
Our mini-shopping trip had left us enough time to get back to the hotel to pack before dinner.  We really had spent very little time in our hotel, so I hadn’t even noticed we had room slippers!  How fun! 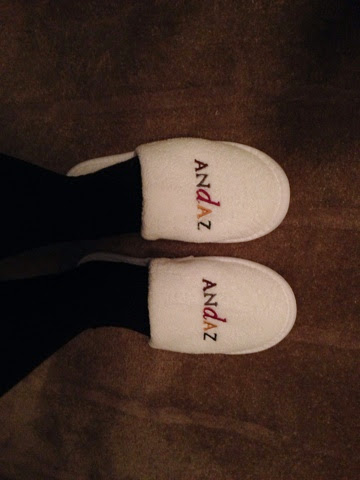 Then, it was time to turn around and get ourselves to Lincoln Center.  This subway trip has to go down as one of my favorites.  An older woman dressed in an aging brown fur coats and two headscarves plopped down next to me, turned and said conspiratorially, “I hate tourists. They ruin the town for all of us New Yorkers.”  I admitted I was a tourist, from upstate.  “Dutchess?” she asked.  Nope, Rochester.  “Ah, I have friends who teach there. But, you’re still a New Yorker, aren’t you?”  In the span of one stop, she shared many of her secrets and then bid me farewell.  She never goes above 40th now, too conservative, and she needed to get a massage.  Too fun 🙂 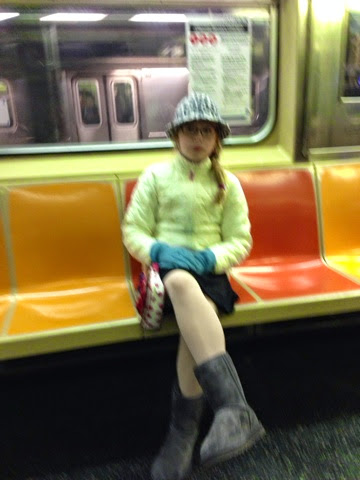 I had made pre-ballet reservations at Cafe Fiorello: a NY pre-Lincoln Center institution.  It’s the kind of NY Italian restaurant where the banquette tables are about one inch away from each other, so–like us–you just begin chatting with the folks at both tables who become instant and instantly forgotten friends. You share menus, recommendations, and observations, and wide-eyed surprise when your waiter suddenly bursts into an operatic version of “Happy Birthday” in Italian for the girl one table over. 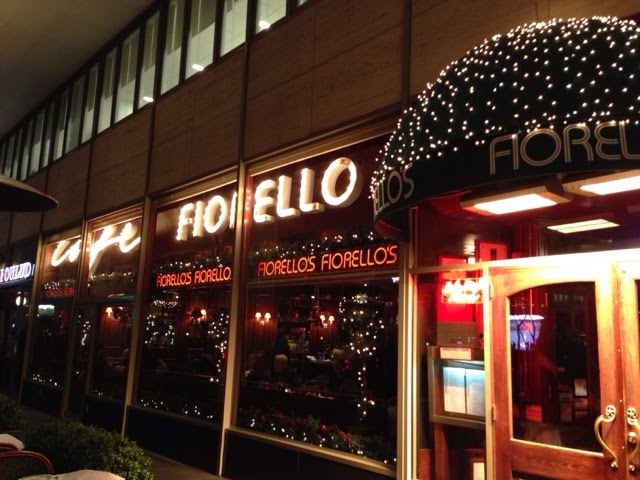 Fiorello’s speciality is pizza (sadly served only after 8 pm) and open face lasagna (happily served anytime).  We got the lasagna, wild boar ravioli, branzino, and garlicky sauteed spinach.  So, so good! 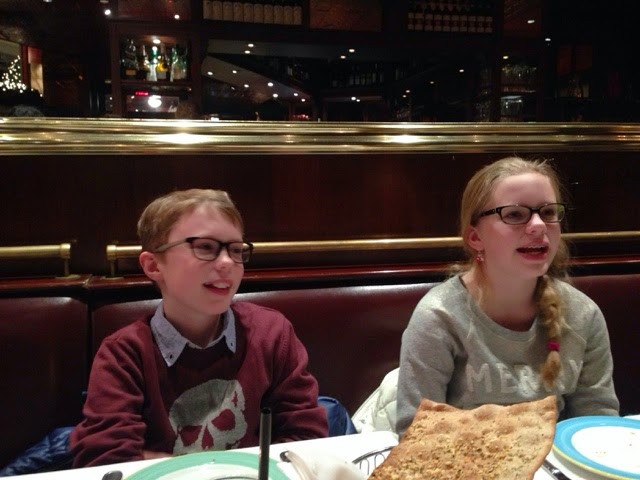 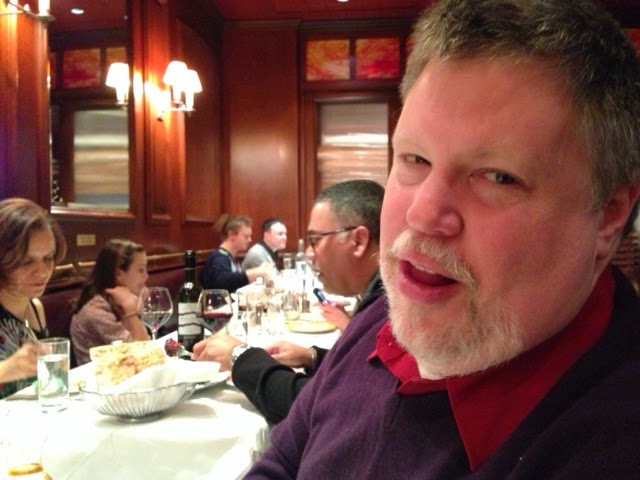 And, of course, we had plenty of time and–we thought–room for dessert.  I had seen the towering tiramisu that the birthday girl ordered and had to have one for myself.  Harper and Penn noticed a unique offering on the dessert menu: Fiorello’s famous “bucket of chocolate mousse and whipped cream.”  Indeed: the waiter comes by with buckets of these two treats and just slaps a huge shovel full of each on your dessert plate.  Sold!  Though to have eaten that much mousse would quickly turn one into a moose. 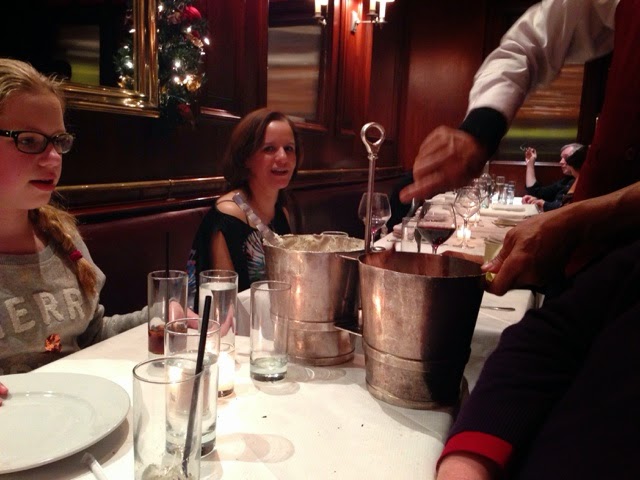 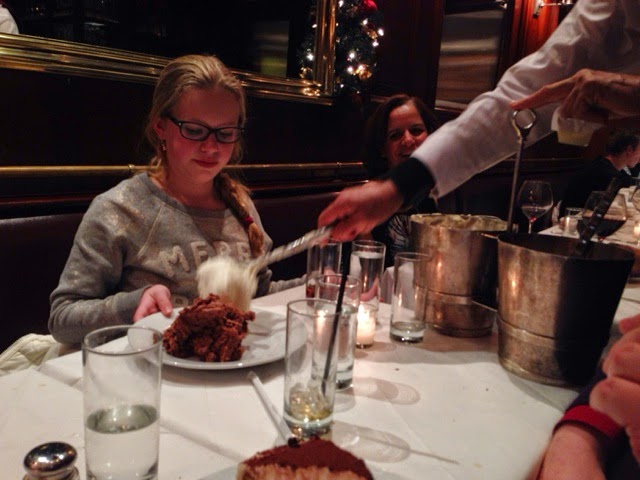 One more charm of Fiorello’s: periodically, the manager walks through with a giant cookie sheet filled with fresh out of the oven chocolate chip cookies–just in case you want one.  Loved it!!  And, once more, we walked out to a sidewalk crowded with waiting diners.  It’s called Open Table, people: use it!

Then, we ran across the street to the opening night of the NYCB’s Nutcracker.  Nothing beats the loveliness of Lincoln Center at night! 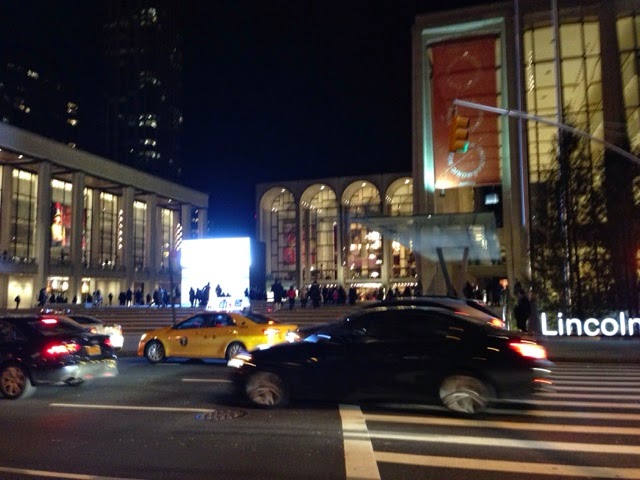 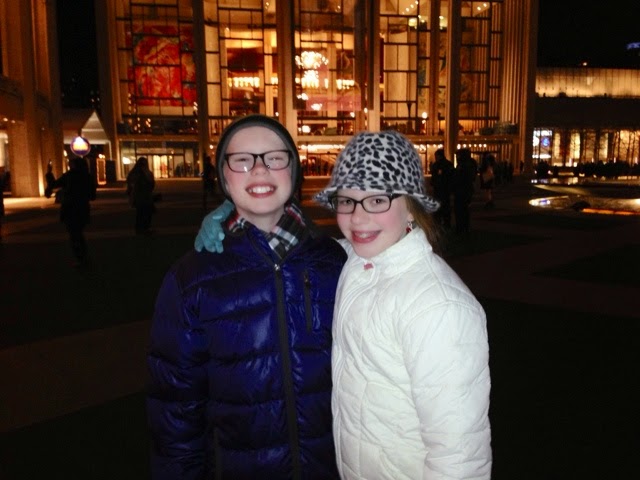 As we were walking in, another New York original asked us if we could adopt him and take him to the ballet, too.  We considered it, but ultimately declined.  After all, we had only four tickets. 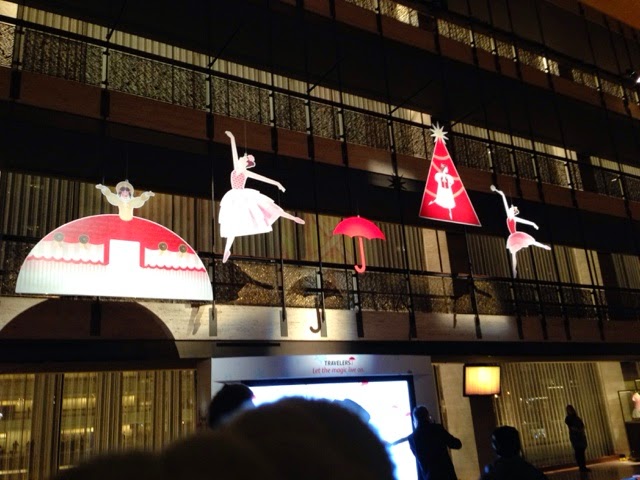 Travelers is the lead NYCB sponsor, hence the umbrellas. 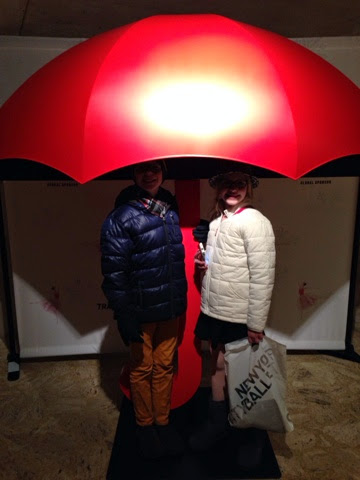 As always, the Nutcracker was a delight.  This was the first time in three visits that Penn stayed awake the whole time.  Our second ring center seats were perfectly positioned to see both the dancers and the musicians, which held Ned and Penn’s interest.  For some reason, this year the performance seemed to fly by.  The children were especially good this time around, and there are few things in life more beautiful than the luminous snowflake dancers gliding across the stage in the blue glow under the softly falling snow.  Harper and I swoon, every single time! 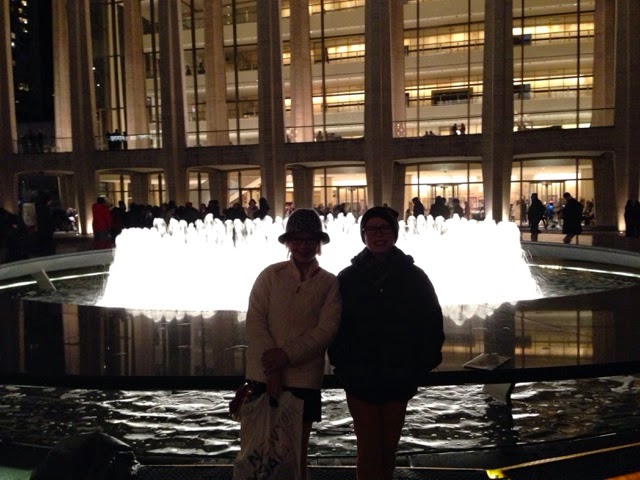 Then just seven hours after getting back to the hotel from the Nutcracker, we were half awake at Newark airport, heading back home. 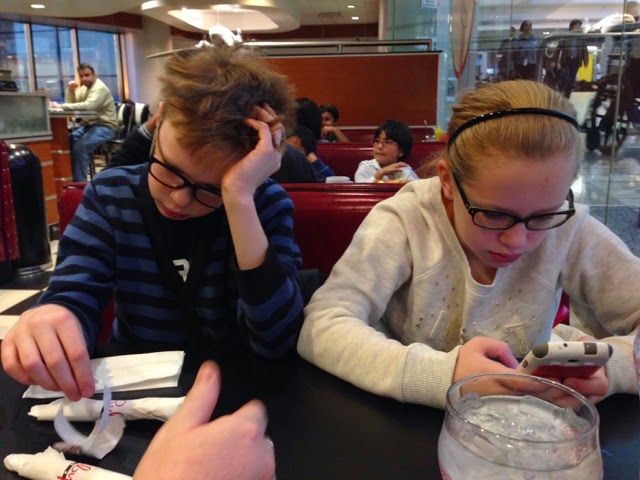 We had a magical Thanksgiving holiday in the city: like the Macy’s balloons, we seemed to float effortlessly from wonderful moment to wonderful moment, creating memories along the way.  We have so many reasons to be thankful every single day of the year–and we never forget it.  Happy Thanksgiving!