Today really had a single point: to see 6 hours of the Royal Shakespeare Company performing Wolf Hall Parts 1 & 2, broken up by a 2 hour dinner break.  You know, every almost 12 and 13 year olds’ dream come true.  Given they’d spend a full work day at this, I let everyone sleep in and spent the first few hours of my morning working in the lobby, fortified by a grande nonfat latte from the ornate Starbucks and free wifi.
Around 10 am, I finally broke down from hunger and began texting the sleeping beauties awake.  Princess Harper was the first to join me for breakfast.  Look at her joy in crawling out of bed. 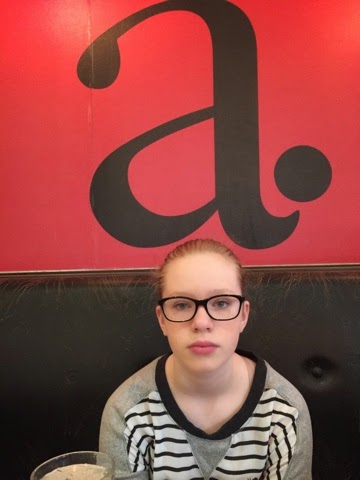 By the time we finished our late breakfast (call it brunch; we won’t), it was time to meander to the theatre.  While chilly, the day was gorgeously sunny! 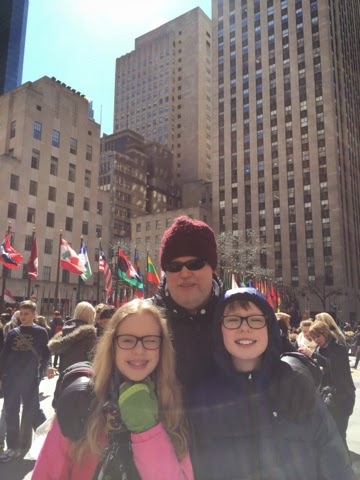 Wolf Hall is in the Winter Garden, an absolutely beautiful theater we’ve never been to because until recently it was the perma-home to Mama Mia–a show on our carved in stone nope list.  Just look at these extraordinary light fixtures.  So grand! 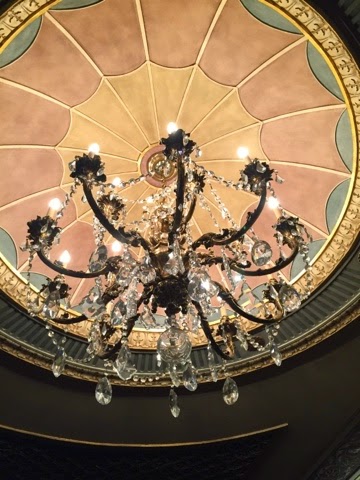 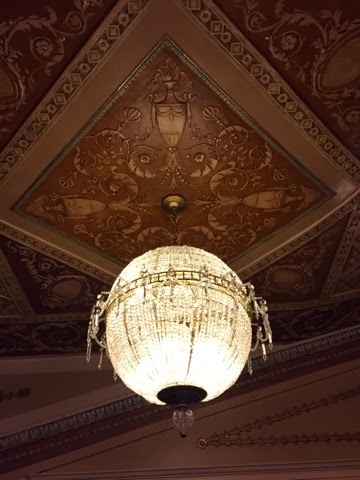 If you haven’t read Wolf Hall and Bring Up the Bodies by Hilary Mantel, you fall into the 3/4 majority of the Kress-Davis family, and–it seemed–most of the row in front of us, who all leaned back very casually and (they thought) unnoticed when I explained all of what happened in Act I and what would happen in Act II to my kids.  They also benefitted from the value add provided by a mom who spent A LOT of time in grad school studying Early Modern history and literature.  Oh, and who has been obsessed with Henry VIII and Anne Boleyn since the 1970s: remember Anne of the Thousand Days?  Anne of the St. Francis Days does 🙂

Anyway, even those in my party who were completely unfamiliar with the story were gobsmacked by the power of the performances and the horrifying sweep of monarchic delusion, pique and history.  Truly, see these productions–they define what makes theater special.  And, Ben Miles inhabits Cromwell so thoroughly, moving from gratitude to ambition to cruel dispassion and hubris–growing larger but more hollow as the plays progress.  Just remarkable.  Look at the cold prison atmosphere of the show.  Court politics played for keeps, ya’ll. 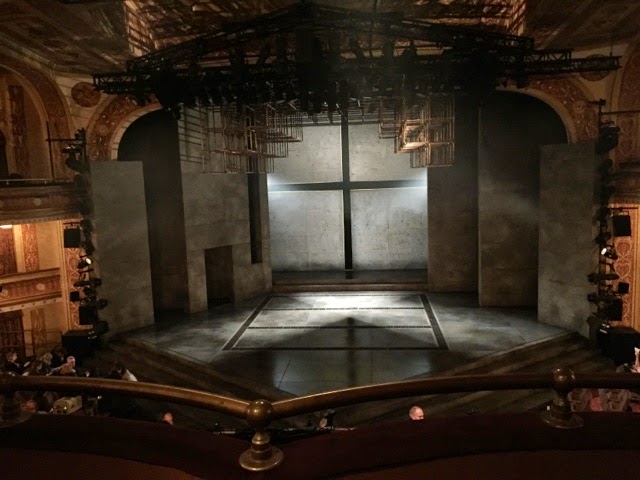 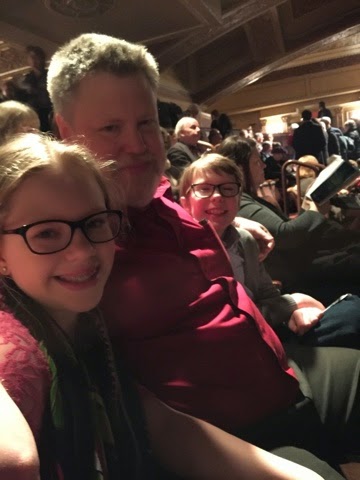 Several restaurants worked with Wolf Hall to offer dinners that were guaranteed to get you in and out between the two plays.  We picked Pigalle, a French bistro that was actually largely populated by French people–including a table reading Charlie Hebdo. 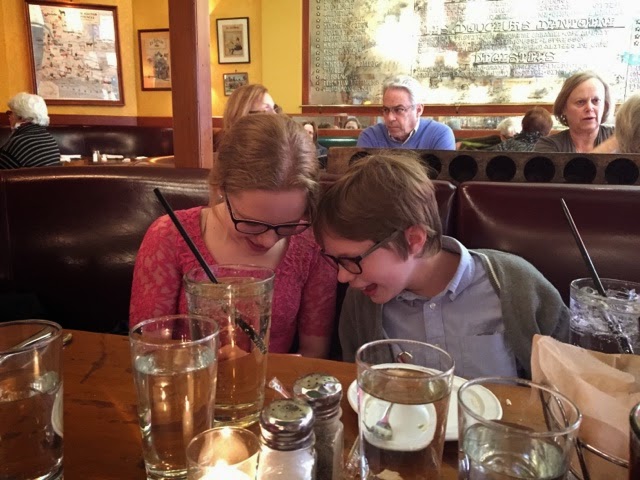 We’re not all high brow culture, though, as Harper and Penn’s immediate response to the offhand comment that “Pinot Noir” was on the silvered menu shows. 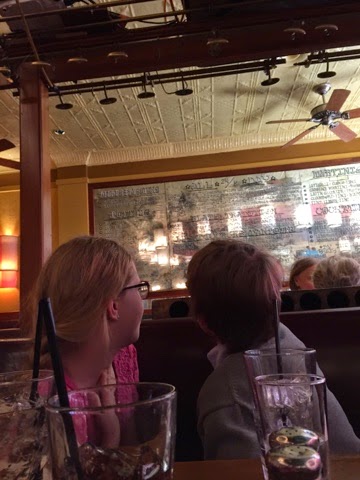 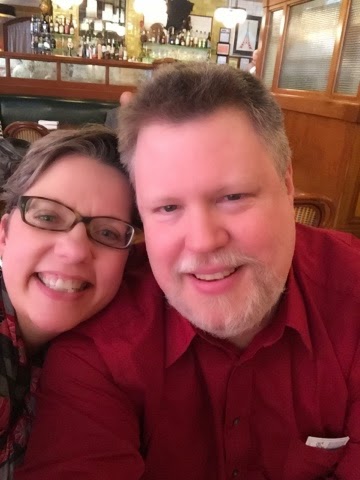 Sadly, Penn lost his eye in a Pinot Noir-related incident.  Either that, or his knit Kermit the Frog gloves lost their last eye.  You choose. 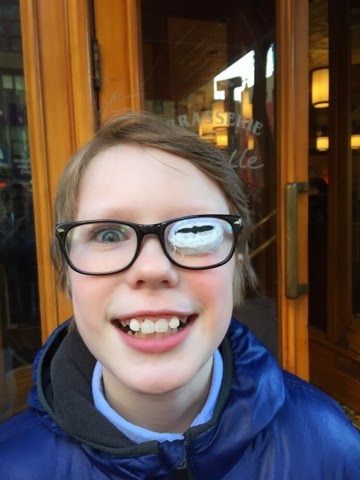 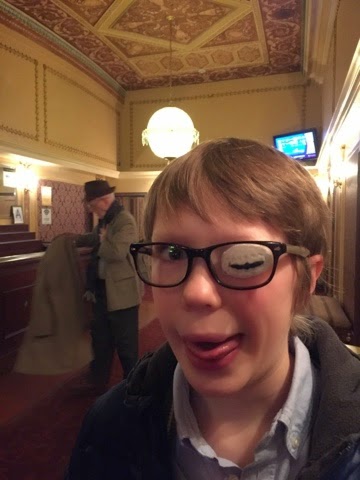 When Bring Up the Bodies let out at 9:30, we had just enough time to walk up the block to Times Square, close out Toys R Us (Penn), buy a pretzel (Harper) and some street nuts (Ned), and a Scrabble-themed Swatch (me).  No matter how many times we’ve been to NYC, those lights draw us like moths to a flame. 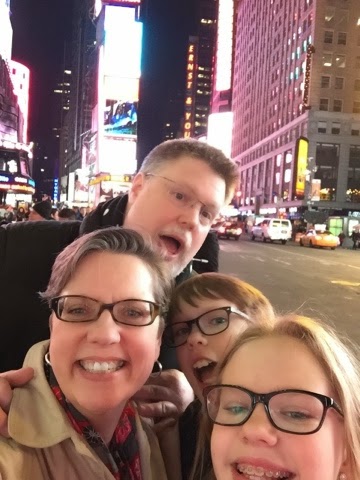 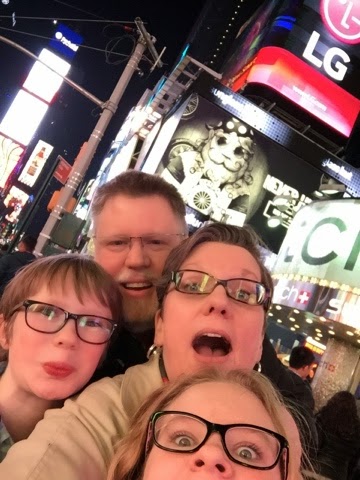 On the walk home, we finally snapped a pic of the Chrysler building down the block from our hotel. 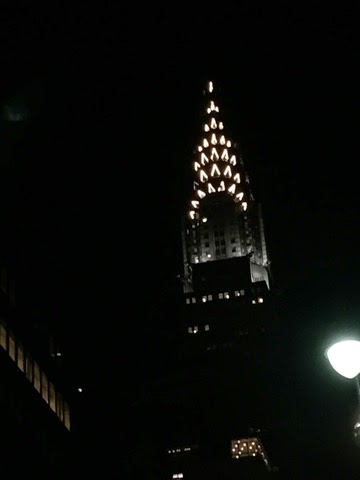 And, another funky Lexington elevator means day two is over–a day in which I somehow logged 9072 steps even though I sat on my bum for 2 hours in the lobby, 6 hours in the theater, and 90 minutes in a restaurant.  Fare thee well, gentle men and ladies. 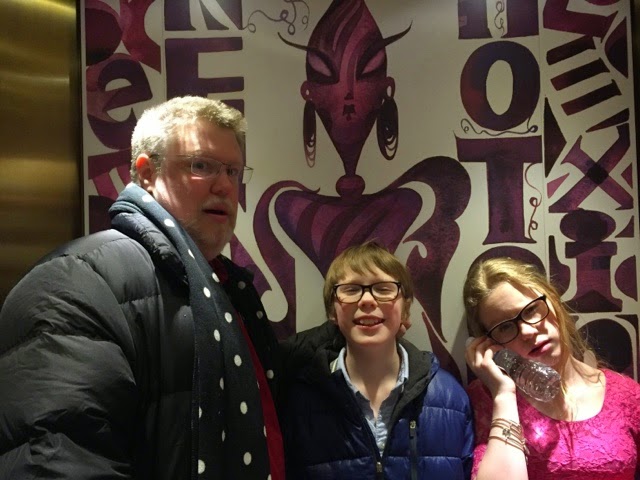