Just in case we were looking for validation of our decision to head to Chicago and skip Cedar Point, Mother Nature provided it: an absolutely perfect blue sky day in the (admittedly, still windy) city.  (For the record, it poured all day in Sandusky, and almost none of the rides at CP opened.)
I’ve been to Chicago bunches of times, and we’ve been here with the kids twice before.  But, we’ve never stayed as far south as McCormick Place, which gave us a new neighborhood to explore.  After arriving very late Friday (we checked in about 11), we were hungry Saturday morning and set off for breakfast.  Our path took us past the Willie Dixon Blues Heaven Foundation, which featured a lovely garden in tribute to Blues legends (note the sky … see, perfect!).

We were walking up a section of Michigan Ave call the Motor Row District, which is where all the dealerships were located beginning in the early 1900s.  History!  Plus, we also found the historic home of Chess Studios, which allowed Ned to share the story of Chess and the segregated recording industry as we walked to breakfast.  You know, like most Saturdays 🙂

Who says America’s infrastructure is crumbling?  I’m sure this bridge is perfectly fine.

And, just a mile after we started down Michigan, we hit our destination: Chicago Waffles!  Home of the … wait for it … Waffle Flight!

Gaze upon the waffle plate of waffle plates: red velvet with cream cheese topping, leige (basically, sugar-intense) with blackberries, chocolate with strawberries, and Belgian with bananas and Nutella.  Plus whipped cream and maple syrup, because waffles.  Were they good?  Suffice it to say that Penn ordered another round of Belgian waffles, because waffles.  Oh, and we also had Chillaquilles and a steak skillet.

We were carbed up enough to consider walking the next two and a half miles to our destination.  We had some encouragement from our headless friends (check out that sky!).

We discovered a skate park that wasn’t here when we last visited a couple years back.  What a cool place!  Every size and skill of skater, scooter-er, and biker was there, from teeny to talented.  Every once in a while, Rochester talks about building a skate park downtown.  Based on our visit to this one, we’d vote yes.

The parks were in full bloom, just lovely!

And, the hills were live with the sound of rolling Kress-Davis children:

Given Friday’s SCOTUS decision and Sunday’s Pride parade, Harper found a fitting message below one tree on our journey.

And added her own 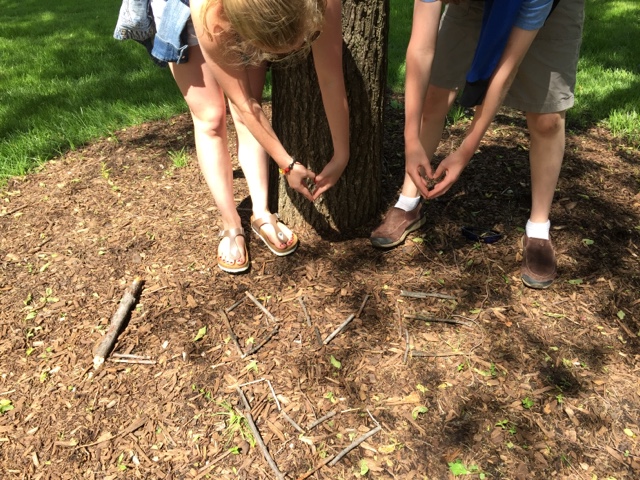 Grant Park goes on forever along the lake and its welcoming loveliness never gets old.  Somewhere in my photo files, I have pictures of Harper and Penn playing in the park when they were about 2 and 3.  He has his toddler-long hippie hair and little baby sandals.  She has wispy long white blond locks and a ballooning sundress.  In almost all of them, she is chasing after him; now, at 12 and 13, the race has reversed.

The garden next to the Art Institute provided a shaded respite.  I know nothing about trees or plants or anything botanical, so I have no clue what these trees are, but their dark branches spread out across the courtyard with remarkable reach, hanging low with bright green leaves.  Gorgeous!

Seeing this statue convinced us to return to the museum, which we might have skipped having been there multiple times before, because it presaged the amazing Charles Ray exhibit inside.  We love us some contemporary art!

In case you missed it, the Chicago Institute of Art is the World Champion of Art, because such a thing exists.

And, we kept walking.  Right past the Chicago theater, where Weird Al was playing that night to a sold out house, making us feel a bit smug about scoring Blue Circle seats to his show at Summerfest on the 4th of July.  What’s more Americana than Weird Al.

And, just in the nick of time, we found our boat for the famous Chicago River Architecture Tour!  En route, as we quickly backtracked our walk up the river, we race-walked along the brand new Chicago River Walk, which is supercool.  Again, we imagined what it might be like if Rochester had a river walk. Apparently, former Chicago Mayor Daley saw the San Antonio River Walk years ago and brought the idea back to Chicago.  So, this was not an overnight project, but it’s a transformational one.
And, we grabbed the last four seats on a bench by the wheelhouse!  All the times I’ve been to Chicago, even I’ve never done this cruise, which is crazy because it was amazing!

Perfect day to sit back in the sun and let the beauty of Chicago’s varied and impressive architecture surround you.  Turns out, the source of all this was the Chicago fire, which in tragedy created a chance to rebuild the city.

The sunny-ness of the day offered an ideal chance for the many mirrored structures to do their thing and reflect the Chicago skyline.

My two ever-growing organic structures with the (now named) Willis Tower, which those of us of a certain age knew as the Sears, then Hancock Tower.

The map on this building is the city with the building marked in red.  We are here.

We picked up a new, delicate passenger along route.  It took a while for this guy to notice the butterfly, then he snapped a selfie with it. 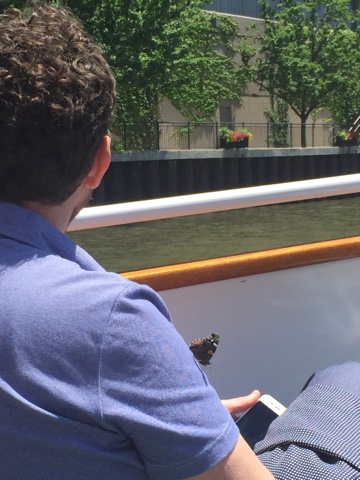 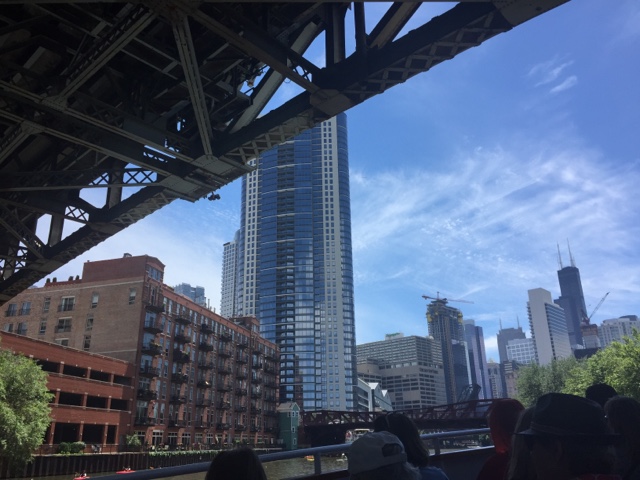 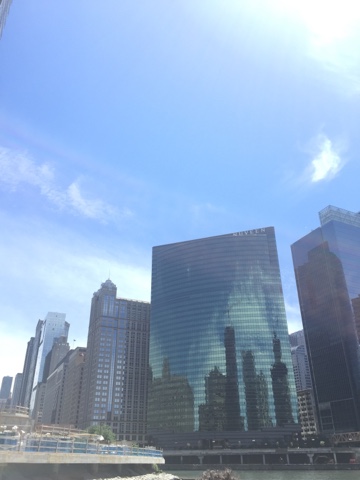 The full skyline on our return to the dock.

On the way to the boat, we ran past a Chick-fil-A!  In the middle of downtown Chicago!  Across the street was a new Asian bun chain, Wow Bao, so we met in the middle, literally, by grabbing an outdoor  table between the two.  We got CFA; Ned got Bao; everyone was happy and no longer hungry 🙂

Art is all around!  This mural is largely duct tape and cardboard.  Seriously!

And, then it was the Art Institute.  Gotta get your Sunday in the Park …

And a little Vincent …

Plus, grab a great shot of Millennium Park …

On the way to Charles Ray.  His work was wonderfully displayed–with great space between to let each rest on its own, allowing a full 360 of the sculpture and a full 180 of the bas relief, which were just extraordinarily powerful and beautiful.

From the windows at the museum, we could see the little pools across the way at MP that called out to our tired feet.

A parade of brides!

Can’t go to MP without a stop at the Bean.

And the fountains.  Again, I have photos from a decade ago of these same children wandering in toddler circles and splashing with abandon in the MP fountains.  Nothing changes but size 🙂

We hopped a cab to dinner, but got there a bit early.  So, of course, we hit up the $1 donut truck because pistachio and coconut cream donuts are the K-D family idea of a pre-dinner apperitif.

Gotta love the West Loop!  Art on the walls and art in process up against the walls.

We went to the Chicken and Farm Shop for dinner.  Highly recommend.  Very limited menu–chicken rotisseried, fried in a sandwich or over waffles, or in gravy over biscuits–plus crazy good sides.  And, of course, hip as heck.

Oh, and unbelievably cinnamon-sugary homemade apple pie served hot at the table out of the pie tin with a side of custard-creamy vanilla ice cream.  OMG–delicious!!

So, by the days end, we had walked about 8 miles (according to my fitbit), eaten many, many carbs of crazy good Chicago food, and enjoyed our day to exhaustion!

So, when the fireworks set off over the Navy Pier at 10:15, two of us were already asleep, and two of us were half awake. Still, what better way to fall asleep than by the light of distant celebrations of Chicago that drifted into our dreams of a perfect, blue sky day.