After falling into a dead sleep Saturday night, Sunday got off to a slower start.  Harper eventually drifted down to join me n the lobby.  Her reaction here was triggered by a spoon mishap.  Love her 🙂 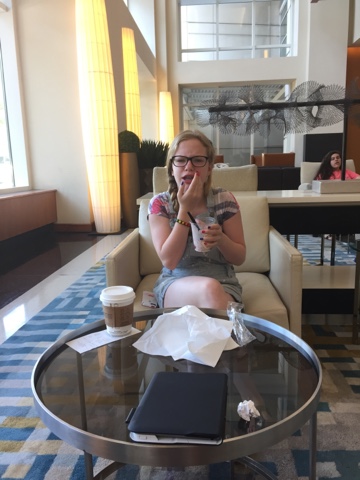 Okay, let’s talk about Divvy-bikes.  Look how lovely they are in this stock photo: 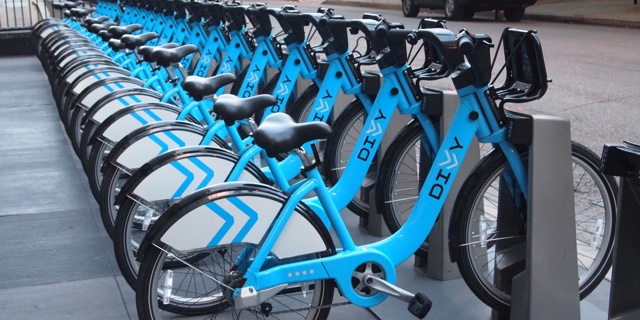 They’re all over Chicago, including in front of our hotel.  “Let’s ride bikes,” we thought.  So, we got 4 Divvy bikes and started riding to breakfast, mapping our route via phone GPS.  You need to check your bike in every 30 minutes or you’ll get more charges.  So, problem #1: when we did this, our bikes locked up and the machine wouldn’t give us another code.  We needed to get across town for brunch, so after much “discussion” about the bikes, we gave up and grabbed a cab.  More on the bikes later.
We joined our friends Alyson and Michael and their daughter Meredith at Sunnyside Up for a crazy yummy brunch: bacon pancakes, confetti pancakes, chocolate chip pancakes–you get the picture.  So, so good.  We also got our parent-faces on.  Here’s the Ned: 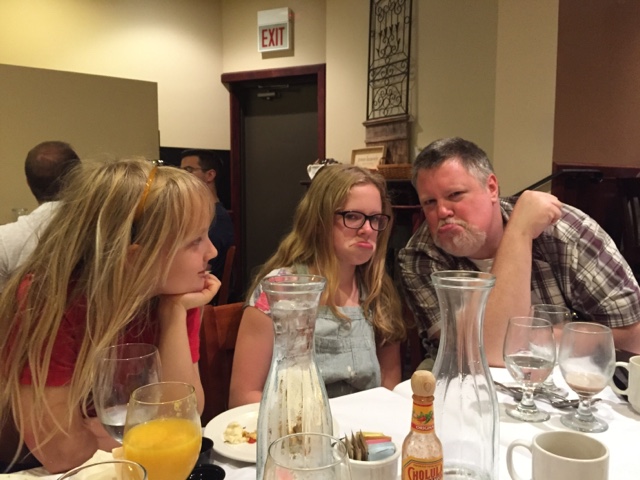 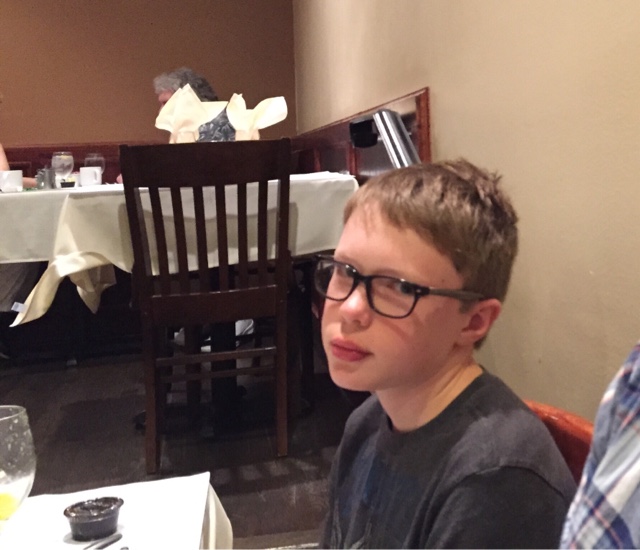 A filling and fun time was had by all. 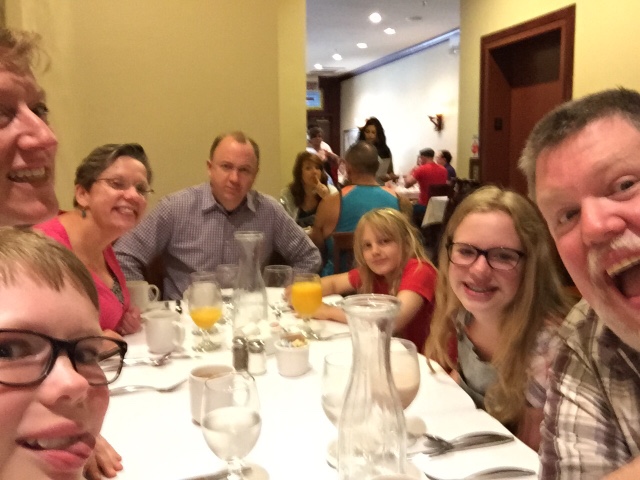 After brunch, we slow walked ourselves down Michigan Ave–this time from the Mag Mile end.  Again, beautiful flowers everywhere and some choice blossoms, too. 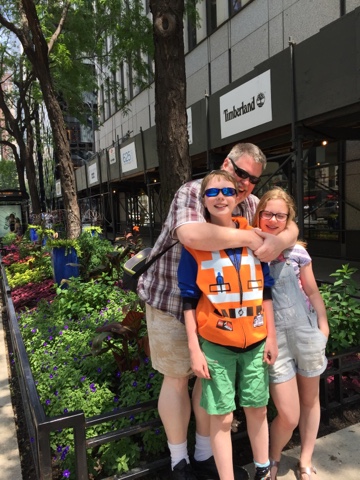 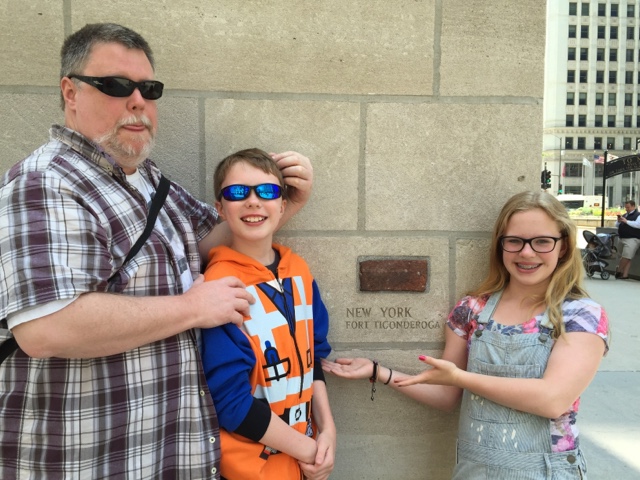 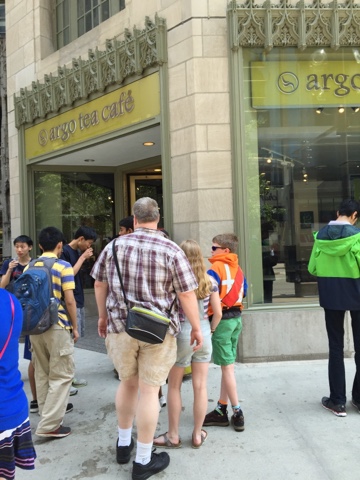 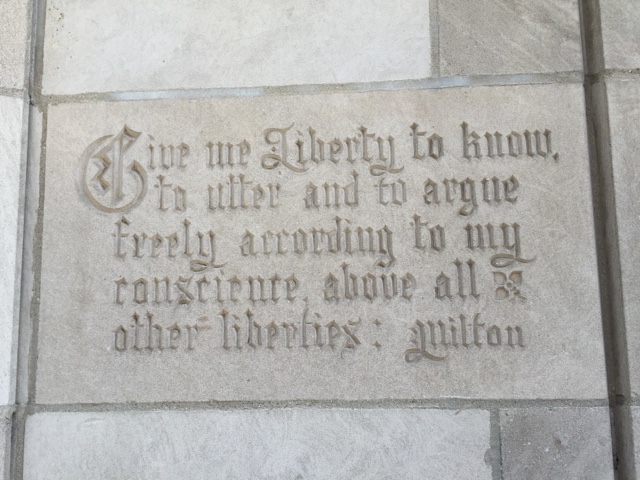 The river, this time from the top of the bridge looking down rather than the boat looking up.  Another sunny day! 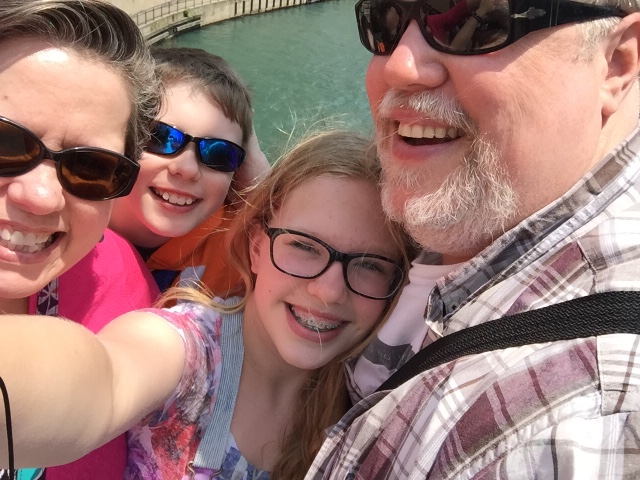 Somehow in about 10 blocks, we had walked off brunch and needed some popcorn.  Giganto bucket alert.  Ours was smaller. 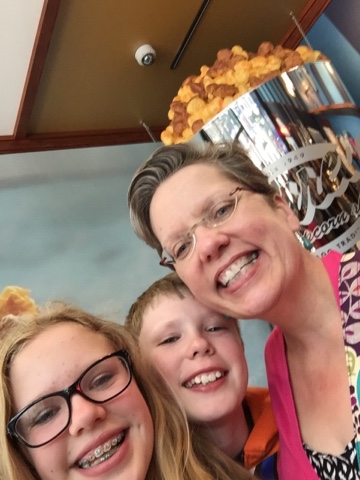 Over brunch, Meredith filled us in on the new Maggie Daley park, which had just recently opened.  It sounded, as Harper would put it, amaze-balls. It’s right behind Millennium Park, connected by the massive swirling metal bridge that used to go to the dirt field … that is now Maggie Daley park.  One of its defining features are these postmodern rock climbing walls.  There are two of them with paths of varying difficulty.  According to the staff, the medium trails are ha-ard, and the easy trails are medium.  The kids had a blast and really worked hard, never giving up. 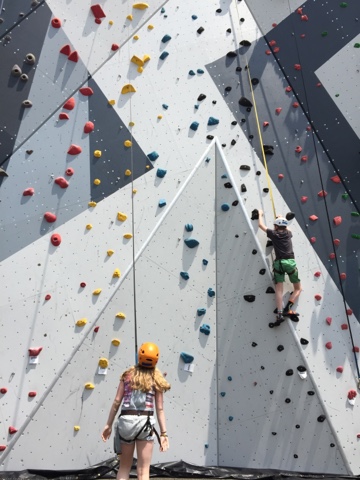 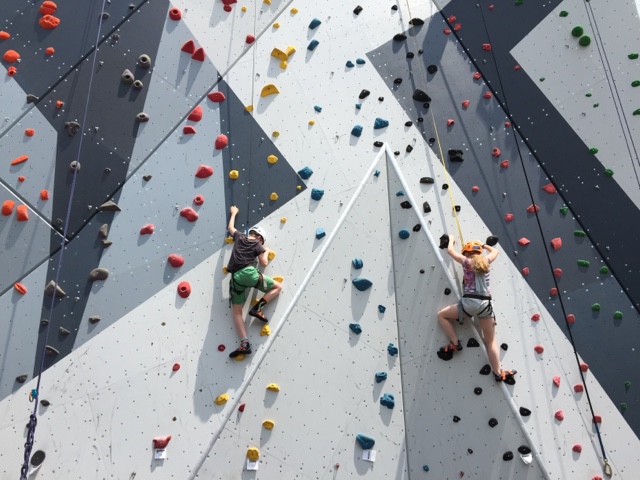 Penn actually made it up the top … twice! 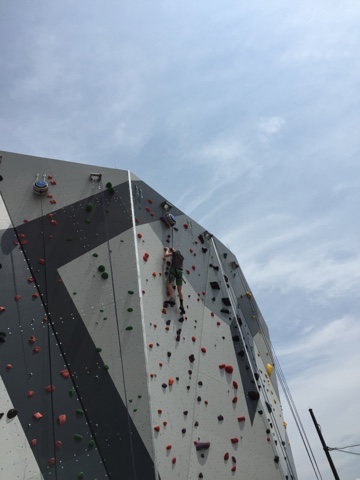 Check out that skyline.  As Ned said, “There’s a lot going on there.”  Also, note the supercool light poles in MDP. 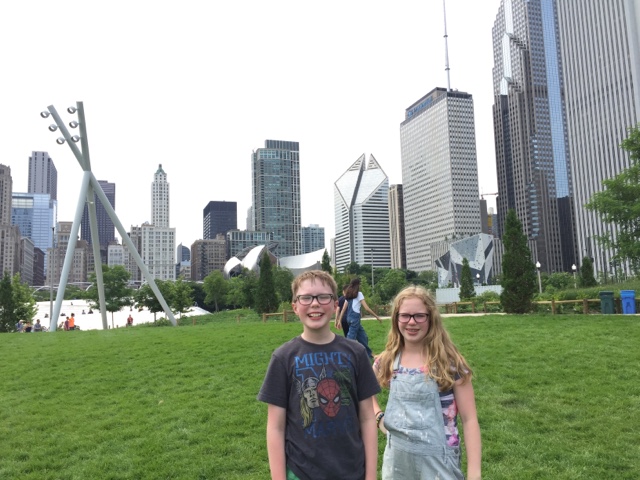 Look, it’s my thumb.  MDP has a huge play garden in the middle that probably could be three times as big and still be overcrowded.  We snagged a bench by the 2 year old swings.  One of the kids playing there was a blonde girl named Sahara; another had two different shoes on.  You get the picture. 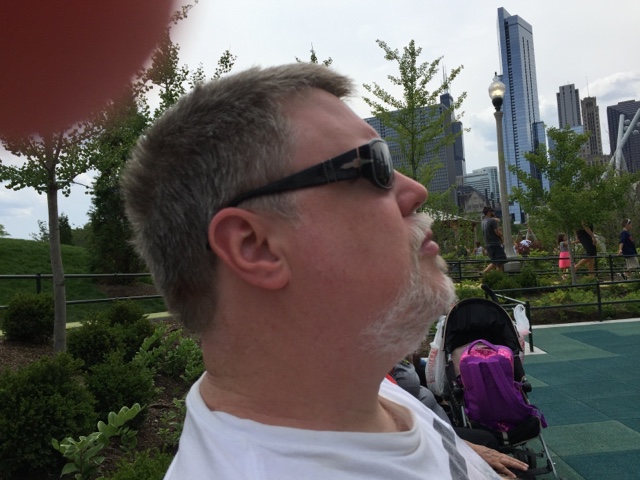 Rock walls in the background. 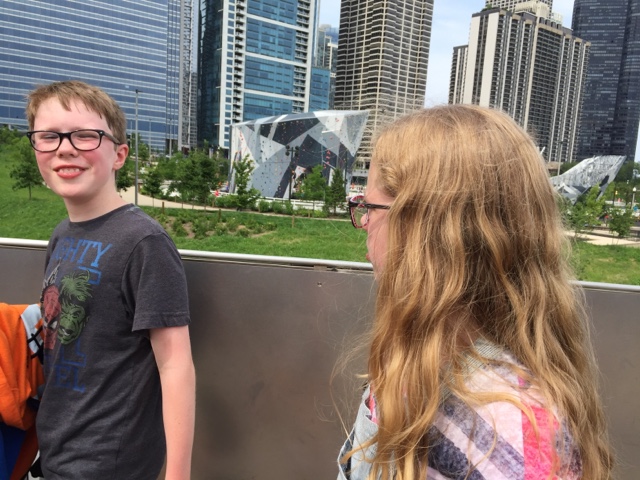 Snack time: Chicago dogs in MP with the first annual Mariachi Festival in the background. 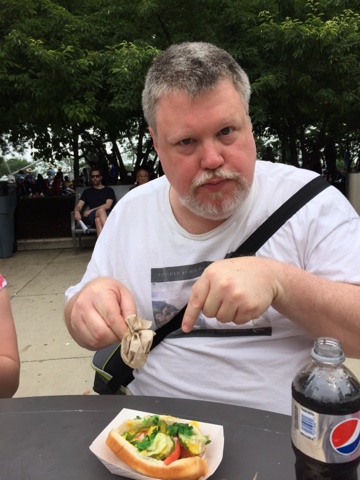 Back to the Divvy bikes: the code still wouldn’t work, but a Divvy guy just gave us four bikes.  We walked them through the crowded Chicago sidewalks to the lakefront.  I’m sure bikes are great for cities, but here’s a thought: create bike lanes first, and when you do create them, don’t let cars use them as parking spaces; create bike paths that are for bikes, not bikes and walkers and strollers and runners and scooter-ers and more so that they become narrow-laned superhighways of horror next to six lane actual superhighways.  Ugh.  Can you tell I was not a fan?  The kids and Ned liked them.  Me? I’ll walk.
We caught a cab back to the hotel after dropping the bikes at the Shedd aquarium, and our cabbie was REALLY into the Grateful Dead and wanted to talk about them A LOT.
When we got a cab to our last Chicago meal, Ned noticed a license in the cab that wasn’t in the last one and struck up a conversation with the driver about the Grateful Dead guy.  Suddenly, Penn shouted, “There he is!”  And, lo and behold, he was right.  Our last cabbie was standing there waiting for a bus.  Current cabbie looked him up and down and assessed him as a “Westsider.”  What does that mean, we wondered, and for the rest of the ride we had a fantastic conversation about stereotypes, Chicagoans, and what it was like to be a Black cabbie on Long Island in the mid 80s.  Hint, it involved the involvement of law enforcement.  Best Chicago cab ride in a long time.
And, then, we were at one of our favs: the LIttle Goat Din  We even got the exact same table we had two years ago. 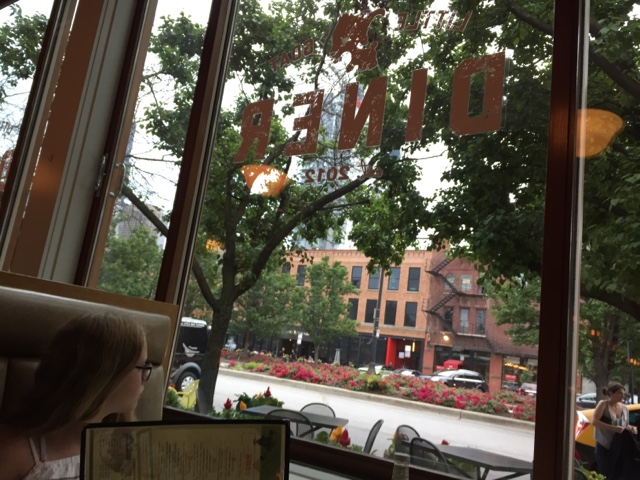 So happy to to at the Little Goat! 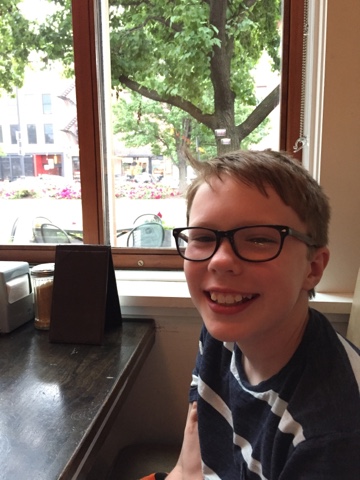 Who’s cool enough to bring cards to the Little Goat Diner?  We are!  Shanghai! 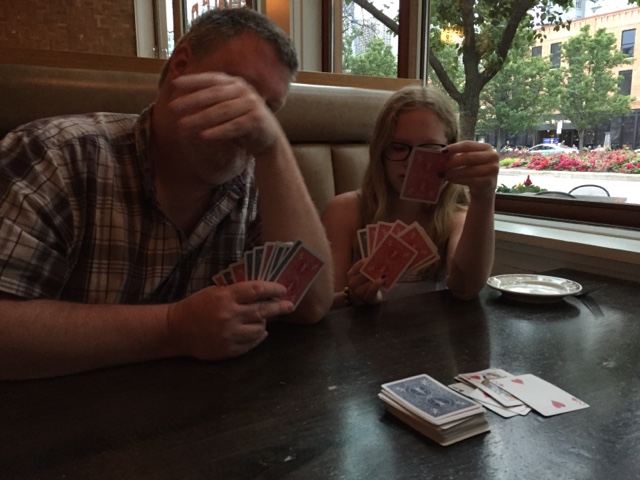 Love this place … so cool yet welcoming, cutting-edge yet comfort foody, yay! 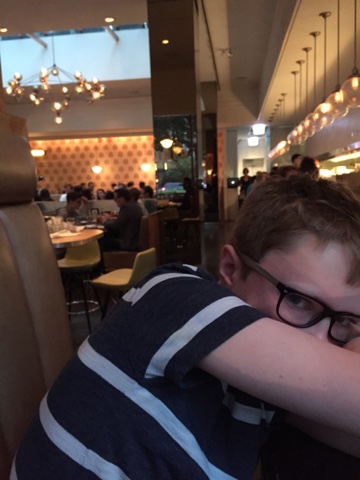 Some blueberry gazpacho, pork belly scallion pancake, burger, macho nachos, and salmon special later, we still had room for dessert.  So, layer on a strawberry shortcake shake, deconstructed s’mores, and an oatmeal cookie, and we’ll roll out of this booth … 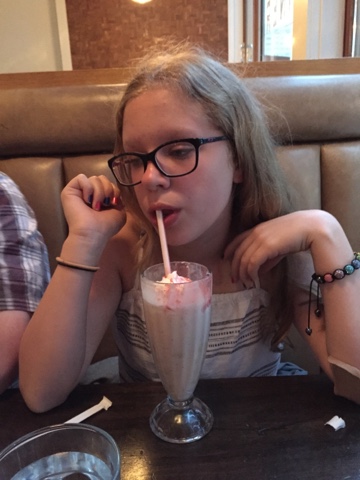 With our new Little Goat beanies on! 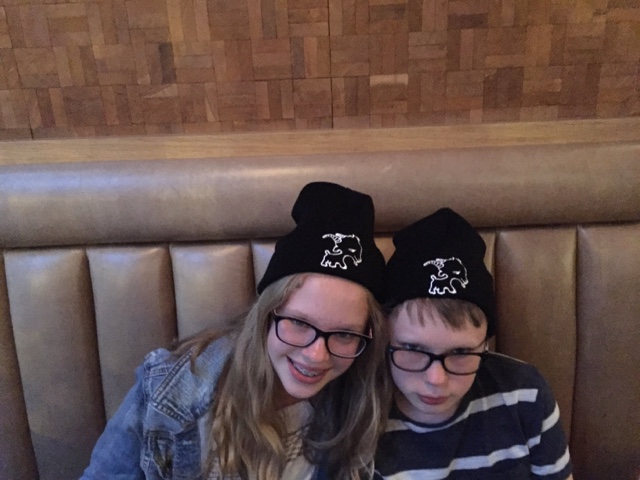 Which we love so much, we’ll wear them to sleep. 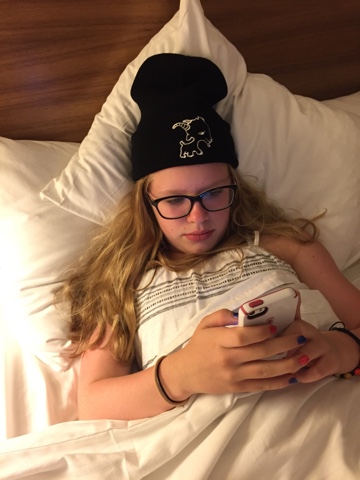