The Starbucks in our hotel was closed for renovations, meaning I got to trek up the block to Tim Horton’s to grab everyone’s breakfast.  The line was already forming for the Toronto International Film Festival (TIFF) single tickets, and I swear it was led by the same two older women whom I saw last year.  We all have our own versions of Fan Expo–some of us wear capes, some of us wear lawn chairs.
After we fueled up on Horton’s Dark Roast (us) and Birthday Cake TimBits (them), we hit the street.  It was Force Friday across the Star Wars universe, so Penn wore his new SW caped t-shirt (thank you, last minute trip to Wal-Mart for all the $10 caped shirts you will see over the next few days) as we set off for FE.  Ned likes his space cowboy dramas with more Whedon, so he went with a Jayne hat and a Browncoats t-shirt (one of last year’s FE exclusives!) 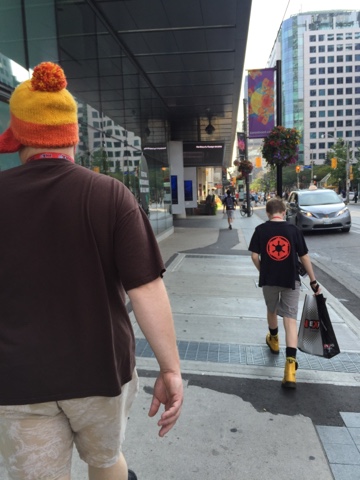 We got to FE right as it opened on Friday, so the crowds were at a minimum.  Dear reader, you may wish to compare the luxurious space afforded us on this escalator with what will happen later this same day. 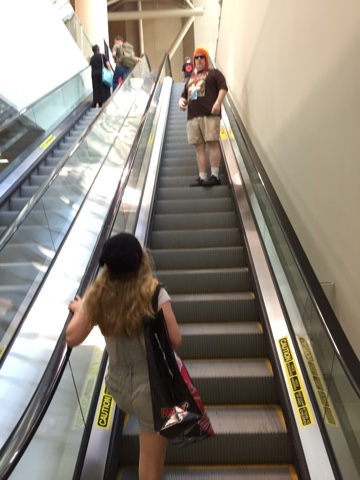 Our first stop–the special events booth …. how sci-fi is that?!  The Force was with us earlier in the week, when we were able to swap our “Evening with the Companions” special tickets for “A Hogwarts Reunion.”  We were in when it was Billie, Karen and Jenna but on the fence when Billie couldn’t make it.  Then, suddenly, Rupert Grint announced he would be making his first Con appearance ever at FE.  You had us at Rup–.  Diligent readers of this blog will remember that I cried on the Great Hall set at WB Studios outside London.  So, three Weasley Bros and a Draco … that’s a Kress-Davis ticket.  Note the tiny backpack.  My Little Pony, $3 at WalMart, a perfect compliment to my Good Night Moon t-shirt.  No one judges at FE, people, no one! 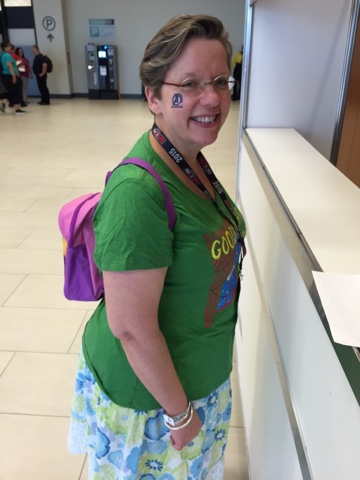 Here’s a nice panorama of the North Building just as the morning starts.  This is only 1/3 of the space taken up by FE.

These signs were all over this year, making us wonder what in the world happened last year that we missed.  Anyway, as veteran conners, we always ask if we can take a photo.  Apparently, we were in the minority.  All this sign managed to trigger in our family was Ned periodically shouting, randomly, “Cosplay is not Consent, People.” Thanks, FE. 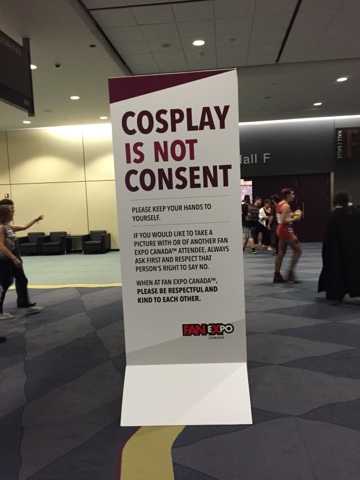 Here’s some consented cosplay.  The world’s most adorable Avengers family: 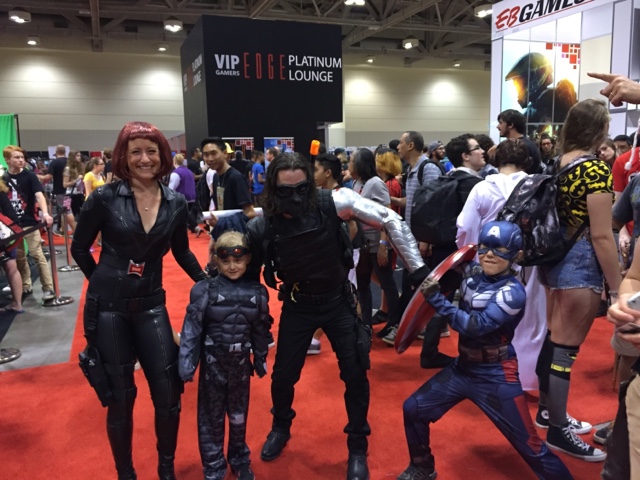 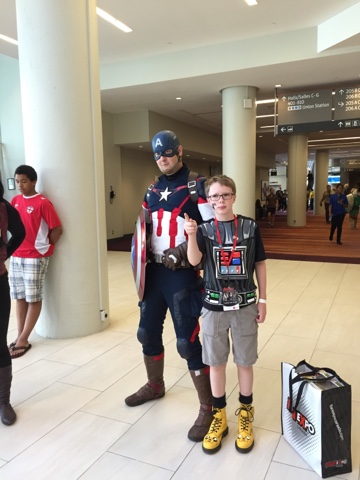 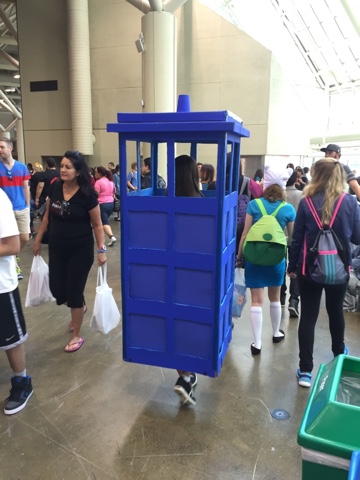 And, it wouldn’t be Canada without a guy with a cigarette and a cup of Tim Hortons in Jesus cosplay. 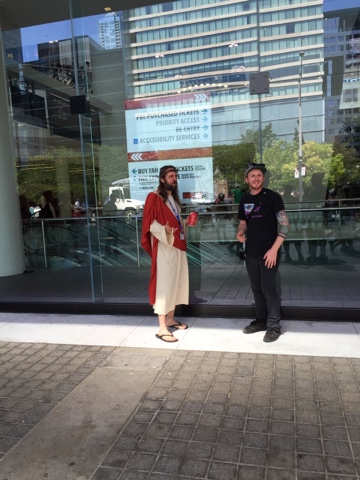 I mentioned Force Friday.  There was a 90 minute line to shop the Hasbro Star Wars collection, featuring some limited editions.  If this booth had featured Mad Max/Furioso merch, we’d have been in.  SW, we gave it a pass. 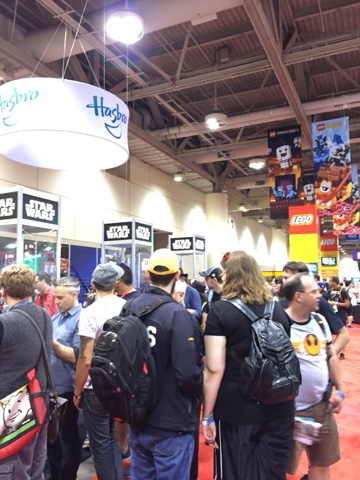 But, I have to admit, this was the coolest drone we’d ever seen: a little Millennium Falcon.  If they hadn’t sold out, I would have bought one on the spot.  It’s the tiny rectangle looking thing floating in midframe. 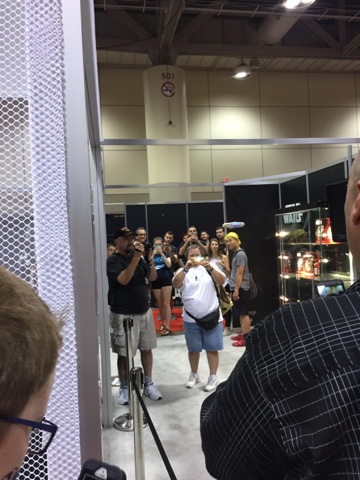 We ran across the street for Express Thai lunch.  Delish and much needed replenishing. 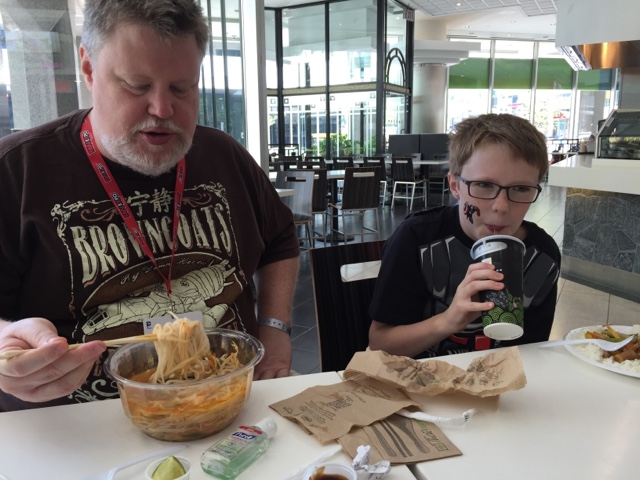 We almost went back to the hotel for a swim, when I noticed that Karen Gillan was scheduled for a Q&A that afternoon.  So, we traded hats and dove back into FE.  Again, look at the lovely spaces on this escalator. 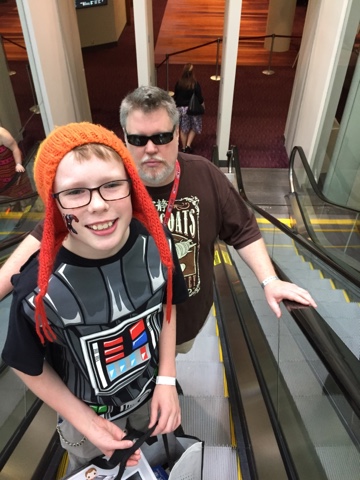 We got to the session early enough to walk right in and score some decent seats.  I love the look from the women behind us: one looks like she’s about done with FE, one looks horrified that it might end. 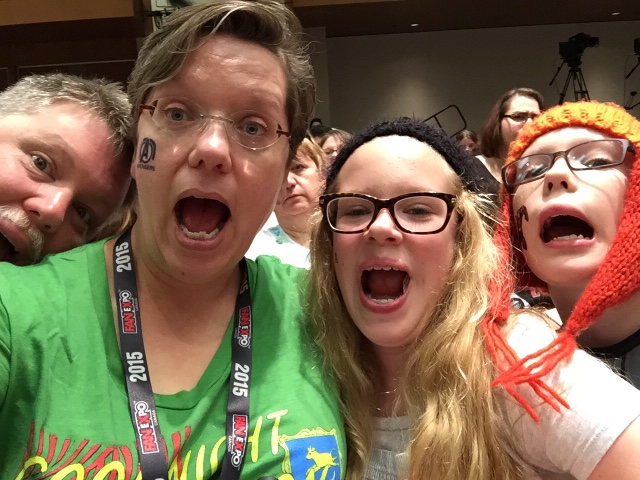 Karen Gillan was charming, funny, and very, very Scottish.  In person, she’s like a constantly moving blade of grass, thin, tall and bright. 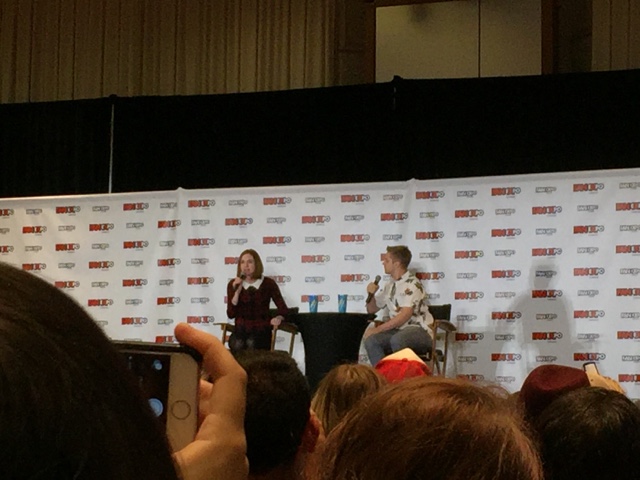 Although her answers were always genuine and generous, the questions were too often the same.  Still, it was lovely to hear that her Doctor trio (Matt, Arthur, and her) were very much “mates.”  The biggest news … she’d be happy to return to DW.  The scariest news … there’s still no Guardians of the Galaxy 2 script.  Get working, James Gunn! 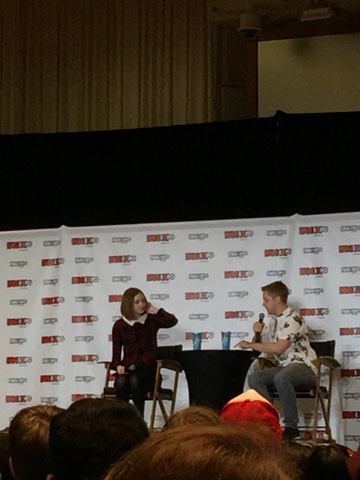 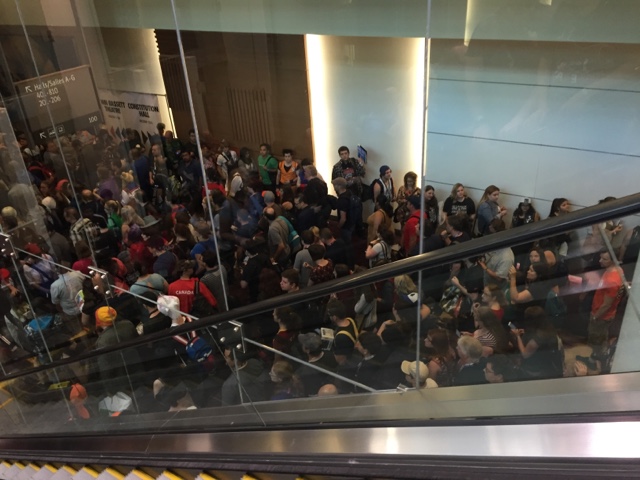 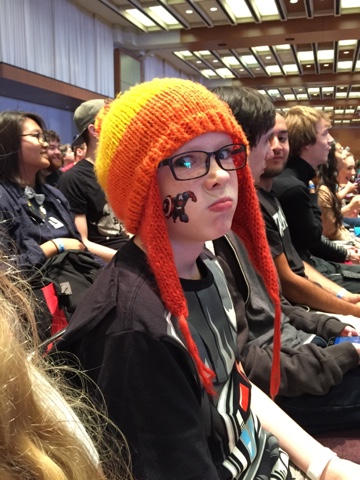 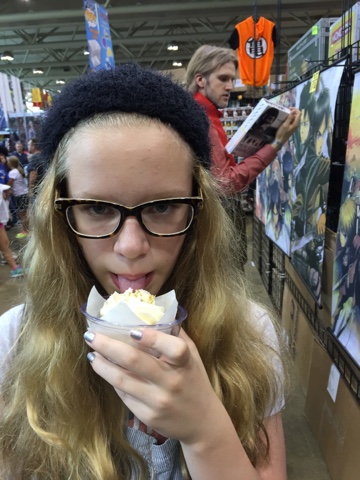 What keeps a veteran FE goer going?  Canadian chips!  This year’s winner was clear: Butter Chicken.  Butter Chicken potato chips, people!  Why have NAFTA if we cannot get these puppies over the border?  Will Trump’s wall keep them out?  Which candidate will promise us Butter Chicken Potato Chips?  Carly, what can you do?  Anybody? 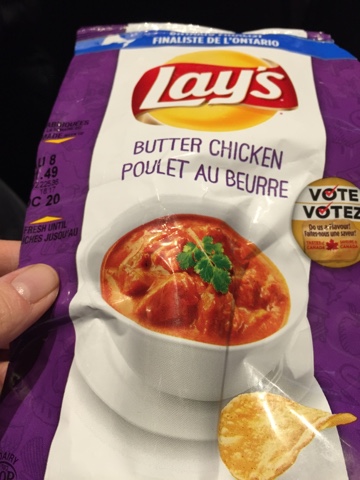 Oh, and these were okay, too. 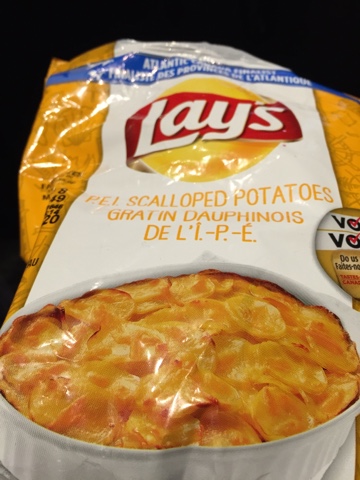 We eventually tagged out of FE and went in search of more actual food.  I believe it’s called dinner. 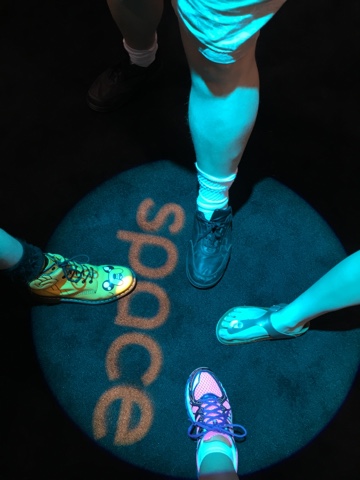 We made a left at the graffiti’d owl and turned into Milagros, a lovely and yummy Mexican restaurant, where we achieved the miracle of arriving right after the Blue Jays fans had departed for the park but right before the FE crowds had descended. 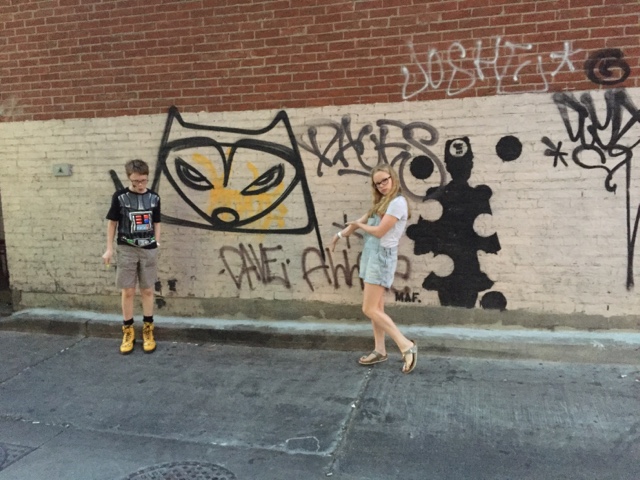 So we got a table right away! 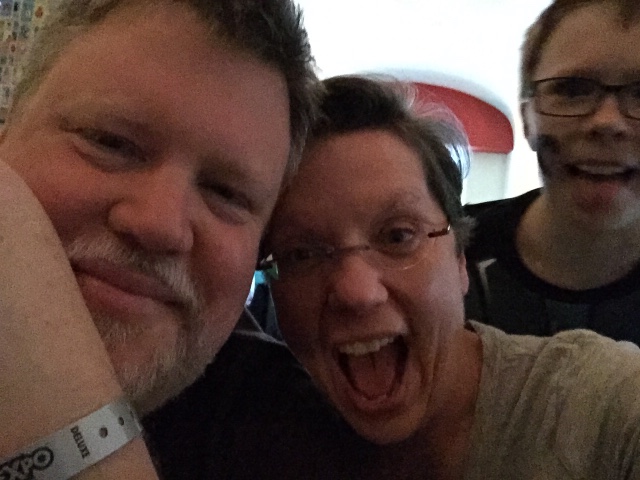 After a table full of mole, pico, guac, burritos, enchiladas, tostadas, tacos, and churros, I was ready for a cafe con leche, and these two were ready to sleep. 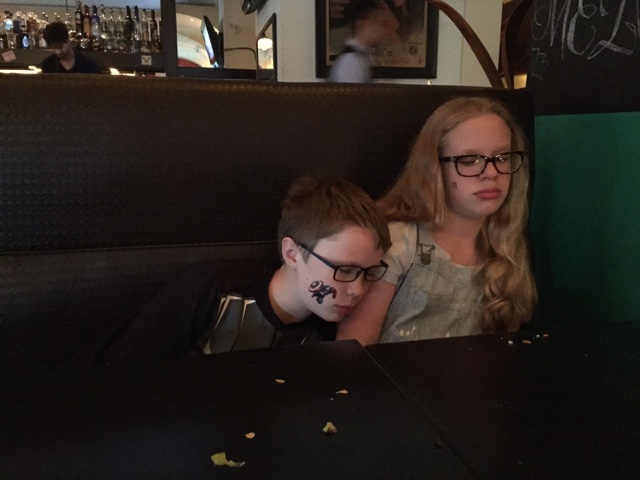 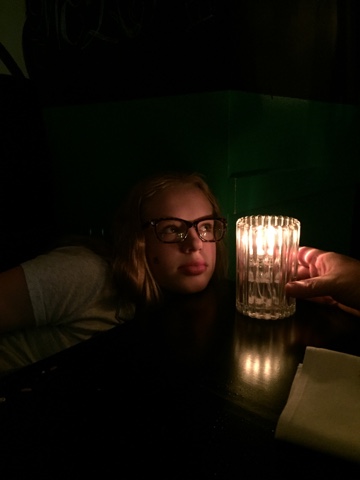 Back at the hotel, we unpacked our Force Friday spoils, which included our free FF lunchboxes, and realized that the exchange rate made this day even sweeter than the churros!  May the force be with you and the odds ever in your favor! 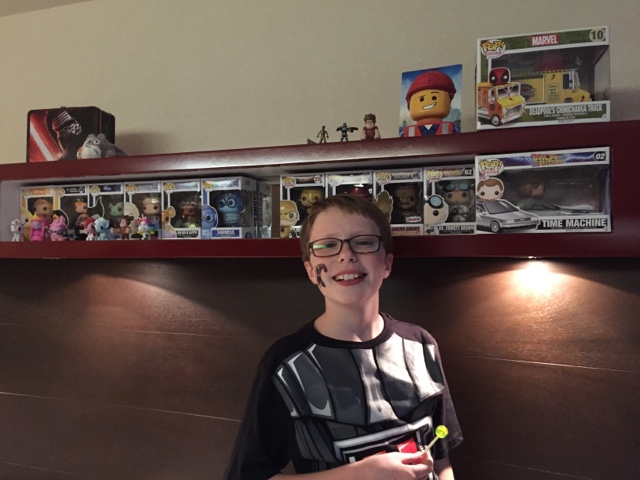