Back to a Hogwarts Adventure Time

There was a newer Second Cup (upscale Canadian Starbucks) across from our hotel, so we started Saturday with a quick brekky.  Look at how lovely and bright.  The kids are marveling at the built in flat phone chargers on the window counter.

I was marveling at the flat white in my cup and the yummy steel cut oatmeal with steam sweetened milk and dried bananas and coconut in my bowl.

Our cups are always half full … at the very least.  In truth, they typically run over! 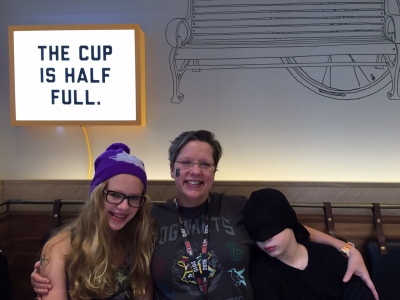 Caffeinated and ready to roll.

Our first stop that morning was a Back to the Future script reading featuring voice actors.  FE has never had an event like this before, and BTTF is having a moment–it’s currently one of Penn’s favorites, and we know the cool hunters’ lead dog is always several yards ahead of the pack.  So, we made it a FE must do.  Clearly, he was right.  The reading was scheduled for the Convention Center Theatre, and by the looks of the looping hallway line, it would be a packed house.

We were about 50 feet from the door in line, so we scored fourth row seats … on the aisle!  Both bottom and top of the theater soon filled.

We had no idea what to expect.  The panel was comprised of the top talent behind your favorite video games and toons.  The only face you might recognize is Phil Lamarr, far left.  We had no idea that they’d be reading selections from the script in multiple voices: Bill Cosby, Barack Obama, Michael McDonald, the Penguin, Catwoman, Morgan Freeman, Jason Statham, Arnold Schwarzenegger, Michael Jackson, and more.  And, they amped the stakes with some PG13 ad libs.

Then, surprise guests started arriving.  First, Jeremy Shada, aka Finn from Adventure Time.  He also does a mean Batman!

Then, voice actor extraordinaire Tom Kenny literally crawled out on stage.  He brought both the Ice King and Sponge Bob to the party.  My videos are not uploading for some reason, but I found this clip on YouTube. Listen for Morgan Freeman and Sponge Bob.
After Kenny and Shada left for photo ops and autographs, more surprise voice talent came, bringing with them a female Shatner and Wolverine.  Part of the joy of this panel was to see how it all clicked together with each new scene and each new set of voices.  They clearly were having so much fun and many had worked together before.  The theater filled with booming laughs and rounds of spontaneous applause.  It ended with the only standing ovation we saw this year.  Well-deserved!

You’re looking at the seven smartest people in Toronto–those of us with deluxe lanyards who thought to ask the lone theater staffer if we could just wait in our seat for the next panel.

We were soon joined by about 1000 of our closest friends for a viewing of Adventure Time’s season six finale and a great Q&A with Jeremy Shada and Tom Kenny.

In the immortal words of Harper, “Jeremy Shada kinda looks like a douche but seems like a really nice guy.”  She’s right.  Both Shada and Kenny clearly enjoy working together and love AT.  Ned’s day was made when Kenny declared Starchy to be his favorite C-level AT character–although he would quibble with the C and bump him to a B.  As Penn noted, “Dad does a great Old Starchy!”

After the AT panel, we were astonished to realize our day wasn’t even half over!  BTW, Penn is season one Netflix rebooted Daredevil.  Harper is once again Lumpy Space Nesmith, Ned is sporting his AT/Mad Max Fury Road smashup t-shirt, and I’m rocking a Hogwarts T with my all purpose Cath Kidston comic book skirt–plus a BMO face tattoo.

On our way to the South Building, we came across a MM Fury Road Finn … a dream come true.

It was Saturday at FE, which meant that about 120K people were crammed into the Toronto Convention Center, shuffling their way between buildings via checkpoints and escalators.  Along route, there are always people watching distractions.  Like Stormtroopers.

And Baymax (so adorable, he even did the Baymax walk).

Season two Daredevil, season one DD, and Cap (who just sort of wandered into the picture).

And, harmony exists in the Marvelverse:  our DD joins girl Loki, a new Cap, and Star Lord to rock the North Building.

Even the littlest FE goers get into the act … Let it Go, Toronto!

After wandering both buildings, we brought our spoils back to the premium lounge to rest our tired feet.  We still don’t know what makes this space premium, other than the fact that most of us got to sit on chairs rather than on the floor in a corner like everyone else.  Our minis of the day.  And, big-up to Mindzai for trading Harper’s duplicate Unicorno for this little Moofia milk bottle!

Penn scored big on his one and only mystery box buy: a Groot keychain!

They take the screening into the premium lounge seriously; this Jedi needed to dig his lanyard tag out of his multilayered costume.  Clearly, the light saber does not speak for itself.

Then, it was off to another queue: this one for our special event, A Hogwarts Reunion!

After waiting in the hallway, we got to wait in the hall itself.  After a long day at FE, it was time for this little Hogwarts student to take a nap.

The Hogwarts Reunion: Rupert Grint (Ron Weasley), Tom Felton (Draco Malfoy), and James and Oliver Phelps (Fred and George Weasley).  This was Grint’s first con ever, making it an even bigger deal.  Felton is a frequent FE guest, and clearly a con-pro.  The real treat, though, was the Phelps twins.  They are absolutely hilarious in a totally British way, bringing Rosencratz and Guildenstern sideline insights into the Potter franchise and a wonderful ping-pong twin word play.  Also, the entire panel really knew each other and clearly still get together to play golf and just laze about.  The two best moments:
1) If he were to do cosplay James Phelps would go as Master Shake because he already has the full costume.  Let me repeat that, he already has a MS costume … at home … in his closet.  Love!!  He then tried to explain who MS and Aqua Teen Hunger Force was to the rest of the panel.  Perhaps the most con-moment ever anywhere.
2) When the panel were asked what they would pick if offered the chance to make a movie based on another book series, it was again James Phelps for the win: Maps.  Yep, maps.  Grint seemed to be on a bit of a time delay that I’m certain was jet lag (cough, cough), and about two minutes later, turned and said, “Mate, did you just say you’d make a movie about ‘maps’?”

We left super glad we had switched our tix from Who to Hogwarts and were wonderfully surprised by the witty Phelps twins.  We pledged to watch all the movies again, start to finish, and look just for their scenes!

The panel singled out this young woman for special praise: Lion-costumed Luna Lovegood became a FE star that night!

We were starved post-panel, so headed to the TIFF O&B Canteen for dinner.  We love this place: great food, hip environs and convenient location.  I think we stop here every year.

A newer arrival on King Street: a literal hole in the wall Gelato place: it seems to be open only at night with a storefront opening as wide as a door backed by a counter with about 8 flavors, a speaker system blasting rap out front, and absolutely delicious gelato.  Genius!

Our stroll to dessert revealed us true FE regulars, as vendors recognized us on the street and commiserated with us about being day three tired.  And, with that, Saturday was over: we went back to the future, had an adventure time, and caught up with old friends from this weird boarding school.  Another smashing FE day.  Maps!