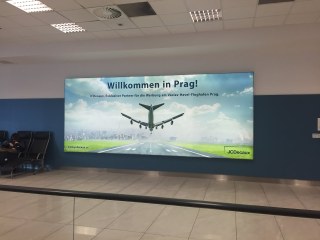 As this sign advises us in German: Welcome to Prague!  That’s right–a mere 13 or so hours after leaving Rochester–including some long stints of pneumatic boot enhanced hobbling and one Mr. Toad’s Wild Ride on a Frankfurt airport go cart, we had arrived in the Czech Republic.  The Prague airport is a bit utilitarian … look at how it gets the Christmas spirit on! 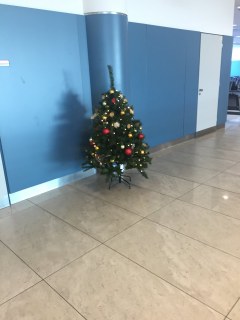 Even though we were delayed by about 30 minutes, our Miss Sophie’s transport service–a lovely Czech man who was not from Prague and did not speak much English but was from a town that birthed many outstanding ice hockey players (whom we didn’t recognize) and was incredibly helpful and upbeat–was waiting with a sign that said “Anne Kress.”  Surprisingly, the Prague airport has absolutely no restrictions about cars parking right in front.  And, no passport check to enter the country.  Interesting.  So, we just hopped in the van and took the 25 minute drive into the heart of Prague.  We had reserved an apartment in Miss Sophie’s hostel–and it turned out to be incredible: huge and comfortable, at about $100/night.
View Inside                                   View Outside

Even though it was about 11:30 am, we were able to get our room, so we followed up by getting a giant bag of ice from the bar in the lobby for my stress fractured ankle and all fell asleep for the next four hours.  Sweet, sweet sleep!
After dragging ourselves up and out, we thought we’d take in the Old Town Christmas market, but needed some Czech money.  No problem, right, because we had alerted our bank we’d be traveling and were assured our PINs would work.  Uh, no.  Let’s call this the comedy of ATM errors.  We sat outside the Metro entrance while Ned ran from bank to bank with no success.  While waiting, we noticed a huge restaurant advertising “pizza and pasta”–they had us at restaurant.  We agreed to eat there and call the bank–courtesy of the 6 hour time difference, it was midday in the US.  The pizza and pasta were amazing and came with free wifi!  But, the bank’s fix did not work, so we punted and Ned ran back to the hotel to get my card.  Which, oddly, worked just fine.  Complete with our Czech funds, we set off to Old Town via Metro.
The Prague Metro is incredibly clean and uber-stylish–seriously, even the tracks were spotless. And there are three lines for the whole city–three lines!   Oh, and everything is basically on the honor system.  You buy a pass, timestamp it once, then that’s it …. they just trust you to use it only for the time allotted: there’s no gate to go through, nothing.  Wow.  Given we’re NYC subway regulars, it all seemed like something out of a sci-fi movie of a too-nice future.  That the stations we used most frequently had this mod Dalek-esque metallic design element didn’t hurt the sci-fi vibe–the colors ranged from bronze to blue to green to pink depending upon the stop.

Plus, the stations pay tribute to national heroes with stuff like this crazy, Samuel L. Jackson in Pulp Fiction eating a Le Big Mac as one of Pavlov’s dogs artwork. Prague was already amazing!

Then, we made our way to the Old Town Christmas Market, which was like something out of a fairy tale.  The night was crisp, cold and clear, making everything glimmer and shimmer just perfectly.  I had probably watched about a dozen YouTube videos of the Old Town market but nothing prepared me for how lovely it was.  The tree lights danced to the music and seemed to drip like icicles down past giant “gingerbread” ornaments.  The backdrop of the cathedral was simply stunning, and the entire square is filled with buildings and ornate cobblestone streets that convey the history and glory of one of Europe’s oldest intact cities (Prague escaped bombing in both world wars). 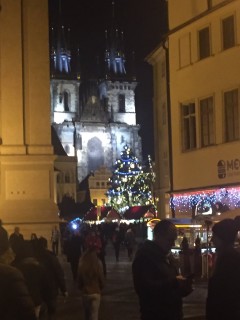 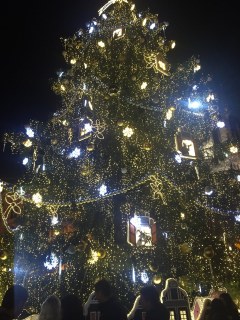 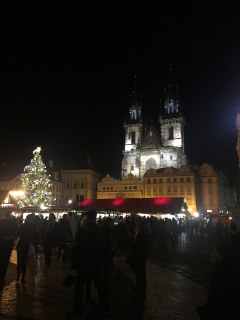 The backdrop of the cathedral was simply stunning, and the entire square is filled with buildings and ornate cobblestone streets that convey the history and glory of one of Europe’s oldest intact cities (Prague escaped bombing in both world wars). 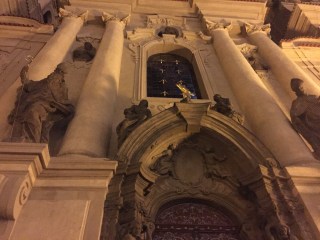 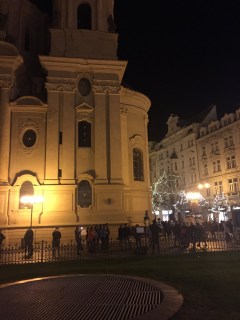 (Sidebar–check it out … I left the boot in the room and went for a light but hard soled Haflinger clog.  Let me just say, these shoes turn out to be straight from the gods!  Especially on the oh-so-unforgiving cobblestones that define Prague.)
And, did I mention that there’s crazy good Christmas Market food overflowing the square!  Giant rolls of pastry, freshly baked over coals and then sugared and filled with Nutella; sausages of every description; huge, wood-fired Prague hams served in massive hunks with slices of rye bread; sugared or fruited crepes; and fresh cut and fried potato chips served on skewers.  Yum! 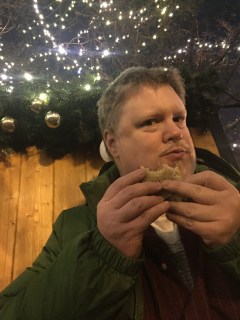 I had thought that the world famous Astronomical Clock was in Old Town, but I didn’t see it.  Then, I heard an ominous ringing of the bell and started fast-hobbling in its direction.  Like magic, there is was. In all the pictures I had seen, it seemed up high and far away, but it was close enough to touch and so much larger than I had imagined. 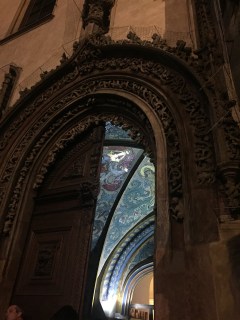 This last photo captures a glimpse of the church that the clock graces–you could only get in with a ticket to climb to the top of the tower … an offer that had no takers in our party 🙂  In the photo on the left, you can catch a look at Death, who tolls each hour–as shown in the video below:

The clock also tolled for us, and we called it a night, passing by several tributes to Franz Kafka along the way.

We cast one last look back at the market …

and slow walked it back to the Metro, where we ran into an old friend. 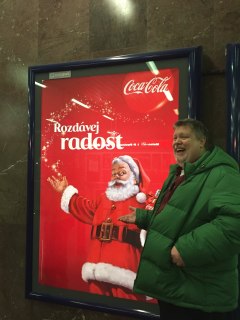 Good night, Santa, we think you might have given us the best gift ever … and we’ve only unwrapped the first day!