Take Us to the River

Our Saturday goal was simply to get from Prague to Nuremberg.  We had one last delicious breakfast in the bright Miss Sophie’s dining room to use up much of our Czech currency and fill our stomachs for the cross-country ride.

We had arranged for a ride from the hostel to the bus station, and it turned out our driver was once again the joyful Tony from day one!  On the ride, he pointed out various sites, including the old Communist party headquarters and the historic train station.  As a tip, Ned gave him the remainder of our Czech money, and we walked into the bus station … only to find that the bus company we had booked was not there.  While I tried to figure out what was up, Ned ran outside to flag down Tony.  Too late.  Of course, we now had no Czech money left, limited time to get to the right place (turns out–our bus company leaves from the lovely historic train station we had passed), and Prague taxis are notorious for ripping off riders.  Sigh.  Ned negotiated with a driver outside for a firm, but ridiculous, price, and we zipped over to the train station.  The best part of the trip was that the driver watched tv the whole time. Oh, Prague!

The train station proved to be unpromising on the outside but gorgeous on the inside.  We hung out in the lobby while Ned looked for our pick up spot.  He found a random Czech guy who walked him right to the waiting point and then asked for a tip, which Ned happily handed over. 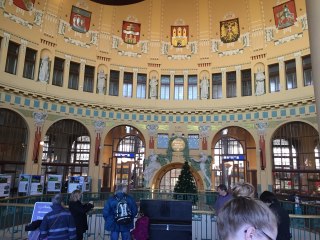 The station is dedicated to Woodrow Wilson.

One of the most interesting things about traveling is to learn how our country and our history is seen by others.  For example, last time I was in Germany, the US government shut down, and I heard many, many jokes about it.  This time, we were told multiple times how young our country is–which is not something we think about much.  All of this leads us to Wilson and Prague.  When’s the last time you though about Woodrow Wilson?  Likely “um, never,” is your response.  But Czech people revere him as the father of Czech independence after WWI.  In fact, the welcome that Americans receive in Prague today can be traced back to Wilson.  History is cool!

We flashed our passports, dropped off our luggage, and boarded a mega-bus to zoom from the Czech Republic to Germany.

The scenery consisted of many, many, many pine trees, lots of rolling farms, distant small villages, and–of great interest to the NYPA Trustee in me–dozens of wind turbines and solar  arrays.  My trip right before we left on vacation was to the NYPA Board meeting, where we had an afternoon session on alternative energy development and secondary markets. So, it was like driving through a demonstration lab.  Not everyone in our trip found that as fascinating though …

A few hours later, we were in Nuremberg.  The bus stopped at the huge train station, which was just across the street from the old town city wall.  While all of this looks historic, little of it actually is.  The vast majority of Nuremberg was bombed to bits during WWII, but when the city rebuilt, it used original town plans and blueprints. Thus, it all looks hundreds of years old but really dates to the late 40s.  Guess who did the pre-reading! 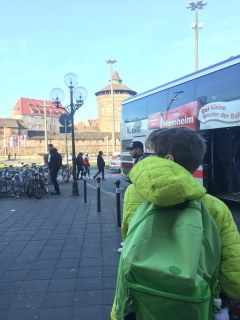 Our ship awaited us about 30 minutes out of town on the Danube canal, which offered a better space for loading and unloading 170 passengers and their luggage.  Our cab driver shared info about Nuremberg along the ride and also admitted he’d never been to Prague, which he’d always heard was beautiful.  We told him it was and advised him to go by bus.

Then, there it was, our home for the next week: the Viking Baldur.  We would have stopped to take pictures, but the cruise director, Boris, ran out to greet us and warn that lunch was only available until 3 (it was about 2:45).  We were starving!  So we scooted inside, dropped our stuff, and ran to eat.

The Viking River Cruise (VRC) rooms are set up for two passengers each.  The beds can be arranged as twins or a king.  We had two adjoining rooms, each of which looked just like the one below–but we did have the beds separated later in the day.  Our rooms had “French balconies,” basically sliding glass doors with no balcony, bien sur. 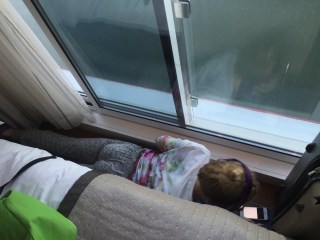 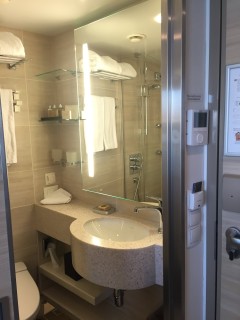 The canal was still as glass and served as a lovely mirror to the walking path across the way. 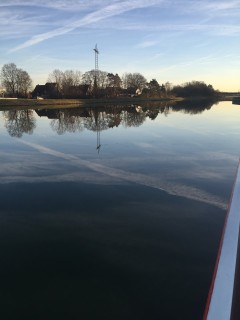 The ship was still decorated for the holidays, and these touches nicely complemented the warm tones of the decor.  There is a lot of wood on this ship, which has a blonde/cream/grey/blue color palette.  The design maximizes windows and light, whether the floor to ceiling windows in the rooms and lounge, the numerous skylights, or the all glass Aquavit terrace.  The boat uses its space well, creating long sight lines in the lounge and dining room.  While we were sharing the boat with 166 other passengers and probably two dozen or more crew, we never felt closed in or too surrounded by others.  Perfect!

Dinner was served each night at 7 and was delicious.  Each menu included several regional dishes and always offered the option of chicken, steak, or caesar salad.  The meal always started with an amuse bouche, then an appetizer, main course, and delicious dessert.  We finished each night around 8:30-9, full and ready to call it a day.  Yum!

Our first night on the Baldur ended with a big, bright moon spreading glittery light across the Danube canal.  Just lovely!