When we opened our curtains in the morning, we saw Passau emerging from the mist.  Passau emerged as a key trading city back in the day because it is right at the German/Czech/Austria border and is surrounded by three rivers: the Danube (our river–that’s right, we’re claiming it for the Kress-Davis clan, which has already conquered the Chicago, Colorado, Cuyahoga, Fox, Hillsborough, Humber, Genesee, Hudson, Milwaukee, Mississippi, Potomac, Seine, Susquehanna & Thames Rivers; Hogtown Creek; and Biscayne Bay), the Ilz, and the Inn.  (Yep, those are ours now, too!)

Harper ponders the rivers’ confluence over her now-standard breakfast of muesli and salami.  Penn awaits his French toast, which–by now–our breakfast waiter, the amazing Radu, knows is his “regular.”

When I opened our window that morning, about six ducks swam right to it (clearly trained to get food from docked tourists).  They seemed so hopeful of getting breakfast.  I felt horrible that we had nothing in the room and was going to run to the buffet to grab a croissant but realized it had shut down. So instead, I gave them a one-act, one-woman, Hamilton-inspired hip-hop musical about their lives, their journey to my window, and our bond.  My children declared me equal genius and madwoman.  Sadly, this groundbreaking and remarkably poignant yet life-affirming work has been lost to history, and even more sadly, I think they would have preferred the croissant.  Lin-Manuel never suffered this indignity. 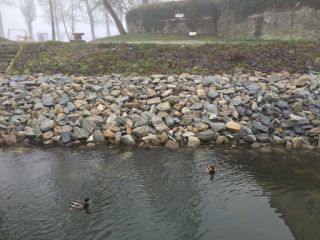 Our tour guide this morning was an older woman who used to teach school in Passau.  As a native of the city, she was especially impacted by the historic flood that brought the towns rivers into the city to the height of about 13 feet–and by impacted, I mean she was traumatized.  She pointed out the flood marks on every single building, shared her perspective on the limited and ineffective response of the town’s government, and praised the intervention by Chancellor Merkel.  The first stories of most buildings nearer to the rivers either look renovated or are in process.

The beautiful town hall marks the flood levels through the years and the missing bottom floor stucco on the next photo shows how far the flood waters rose. 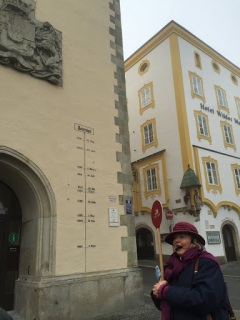 And, because the town is so damp anyway because of the rivers, the thick, plaster walls of some buildings still haven’t dried out.

Passau’s architecture, like Regensberg, has an Italianate influence–note the tower, and many of the streets are even narrower.  Each corner reveals another archway over another winding cobblestone alley bordered by solid walls of colorful shops, offices, and homes. 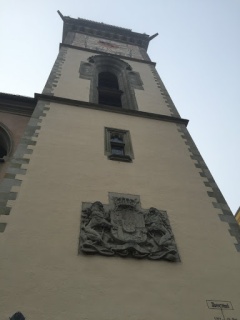 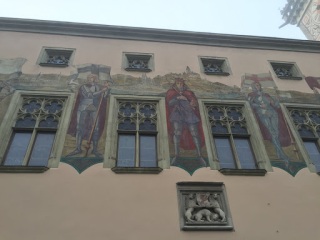 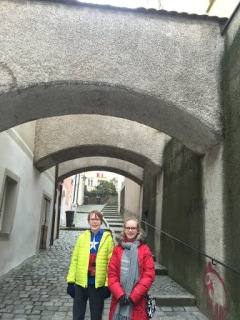 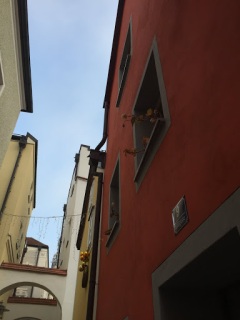 A colorful trail of painted bricks runs down one of the streets, which our family heard alternately called “the arches walk” or “the artists walk”–the German accent is a tricky thing–but either description fits perfectly. 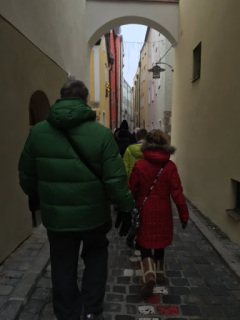 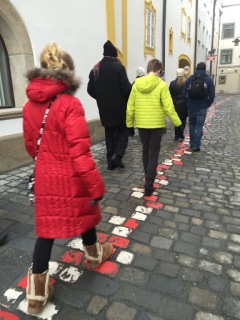 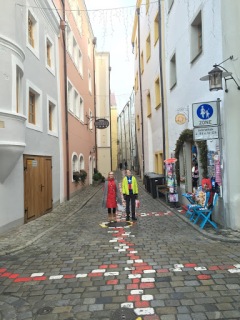 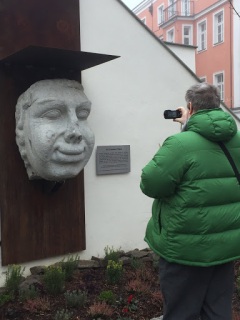 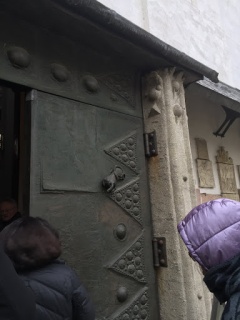 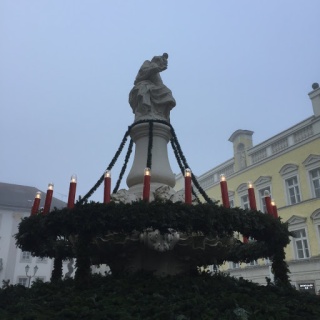 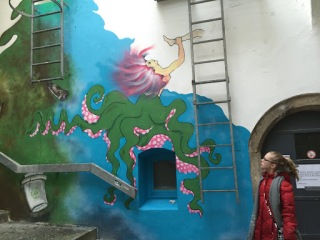 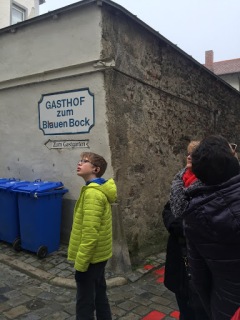 Around one of the corners, we were promised a surprise.  We huddled in the courtyard and crowded into a holiday-decorated tent lined with tables.  Ta-dah: we were making marzipan pigs for the new year.  First, I have to say that Uter Zorker’s phrase, “Marzipan Joy Joys,” is one of our household go-tos for anything exciting yet a bit off, so the opportunity to actually make something of marzipan was, indeed, a joy, joy! 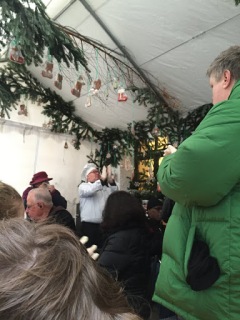 We got warm pineapple cider–surprisingly delicious!–a block of pink marzipan and various decorative items plus a walk through on how to make the pig.  I should pause to note that the pig is a symbol of new year’s luck and prosperity in Germany and Austria, especially when paired with the following: a four leaf clover, a lady bug, and a coin.  Who doesn’t want good luck?  We got to work. 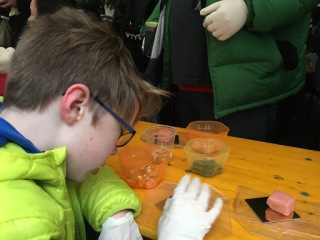 This was my little piggy:

Then, we set about suffocating them or putting them in baggies for safe keeping, you make the call. 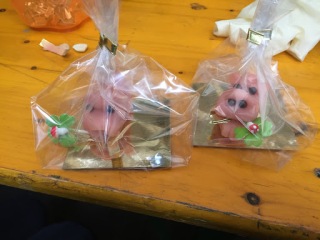 Our guide wanted to take us to the Inn River, and what followed was one of the best uses of our audio voxboxes on the trip.  Because the way there was so tight, we were basically strung out in a long line winding our way through passages and stairways.  We were at the end of the line.  Suddenly, we heard theatrically agonized moans in our ears … and they didn’t stop.  We started giggling, which gave the people near us permission to giggle.  When we got to the end of the last staircase, the cause of this horror became clear:  the Inn was completely shrouded in fog.  Like, you couldn’t even see that there was a river: check out Penn walking into the German version of John Carpenter’s The Fog.

He made it out safely and was immediately recruited into a German rock band. 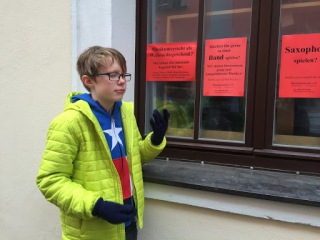 We passed through another misty Passau square on our way to another St. Stephan’s Cathedral for a performance on the world’s largest pipe organ. 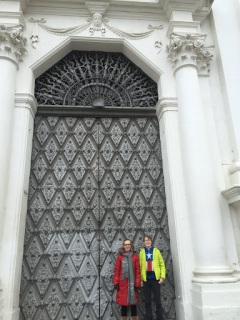 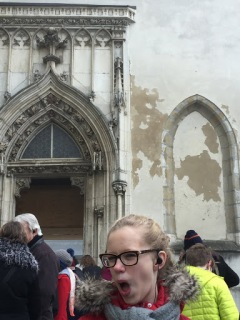 … nothing prepared us for the interior.  Seriously, this was about 8 miles over the top.

Sadly, the concert did not match the triple cray level of the cathedral.  First, it didn’t help that the temperature inside the place was about 15 degrees.  At one point, Ned pulled his scarf over his head and appeared to be wearing a polka dot babushka (and, to Harper and I, appeared to be asleep, which led us to mock him silently throughout the concert).  Penn definitely was asleep, and since he was snoozing on me, he brought the warmth!  And, I guess I expected the world’s largest pipe organ to rock the house and vibrate the place with reverb.  Nope, it seemed a bit droning and fuzzy.  Oh, well, check this box.  Note the joy on their faces … it’s cause it was over.

By this point, our VRC breakfast had worn off.  We were starving!  Finding a restaurant, not a coffee house, was weirdly difficult.  Then, on the pedestrian mall, we found the perfect place: a German Thai restaurant!  After days of brats and strudel, we were excited to eat food that made us feel like we were at home.  I know, even we thought it was odd to have that connection, but in Rochester, we eat so much Chinese, Indian, and Thai food, this menu–in all of its untranslated German–immediately made sense to us.  Yum!

We were now full and deligh-thaied 🙂 and ready to wander the sunny shopping district picking up baked goodies, a variety of gummis, marmalades, post cards, and more. 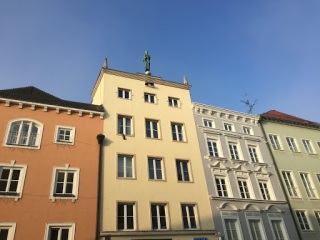 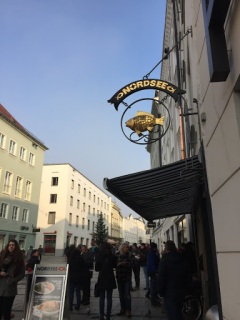 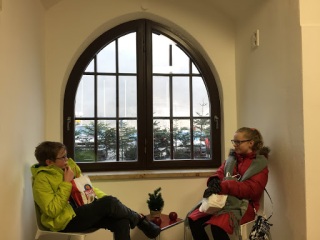 As we finished our visit to Passau and began our walk back to the boat, we literally saw the weather change with each step: skies shifted from blue to grey and back, fog lifted and reappeared.  Oh, Germany! 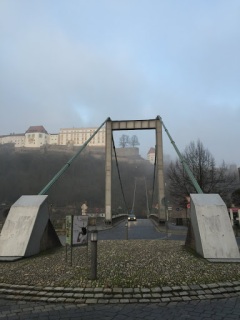 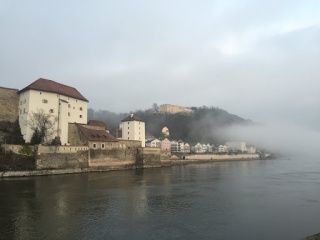 The ship started its overnight journey to the Melk Abbey, and dinner that night celebrated Bavarian culture with every sausage and cheese imaginable served to musical accompaniment.  We also got a tour of the kitchen! 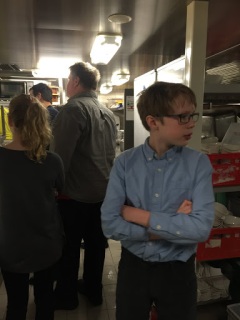