Our morning view was not especially lovely, but in truth, Melk is a tiny town with one claim to fame: the Melk Abbey, which was why we docked.

Equally in truth, this day had one claim to fame: it was Harper’s birthday!  Our tradition is that each year, I decorate the kids’ doors with some objects in the same number as their age.  I’ve cut stars from magazine subscription cards, letters from newspapers, found Lego and flower clip art, and more.  So, in our luggage, I packed 14 small bows.  Ta-da!

We boarded our bus to make the drive up the hill to the abbey and caught sight of this sign.  We agreed this was a cruise we were glad NOT to be taking! Blech! 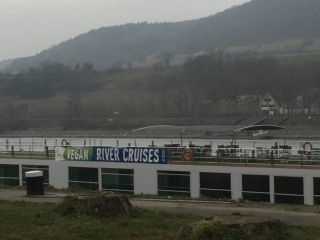 Even the grey start to the day couldn’t take away from this view!

This diorama from the abbey gives a good sense of its role in Melk: it rules! 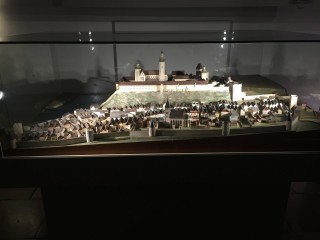 And, sure enough, as it did day after day, the sun started to break through.  In the time it took our tour leader to find us, the blue skies were appearing.

Our tour guide had this amazing deadpan, sing-song voice and looked like a permanent liberal arts grad student.  She was from Melk.  Turns out the abbey now runs a boarding school (gymnasium) that has multiple international exchange programs.  Our guide was recommended to attend the school by her headmaster, but she “hated him” (her words), so she didn’t.  Drama!  The painting she’s standing next to is of Maria Theresa, the only female ruler of the Hapsburg dynasty.  The tiny doors lead to small wood furnaces that would have keep the crazy long hall and the rooms off of it warm throughout the long winters.  As Penn’s photo suggests, we just used our mittens. By the way, the hall photo captures just one-half of the its length.  Fitbit heaven! 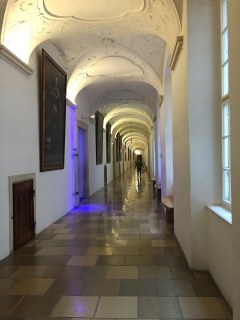 So, you might be asking, “What’s the weird blue light?” I’ve mentioned before the Euro-tendency to pair the ancient with the ultramodern.  Well, the abbey is home to a starkly post modern exhibit on the history of the order, its relics, and its history.  The colors capture the mood and projections provide the monks’ mission and vision.  The whole combination somehow works to capture the single-mindedness of calling and devotion that built the abbey and consumed the monks’ days.  Cool! 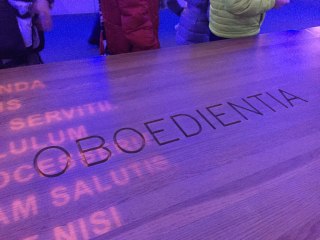 These installation rooms are covered in a plain grey carpet that harkens back to the abbey’s simpler origins while still giving us a glimpse of the posh renovations that followed. 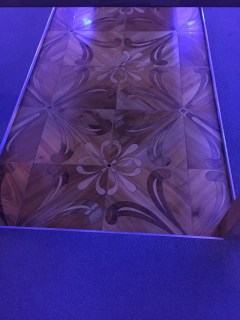 As we moved through the rooms, we were moving through time, and the artifacts reflected the changes as the abbey transitioned from leaders who had more basic forms of decoration, saw avarice as the tool of the devil, and came up with innovations like the reusable casket (for reals! you pull a lever and the body fell into the grave out of sight of the mourners) to those whose enthusiasm for gold handwork, gold anything really, and cherubs knew few bounds. 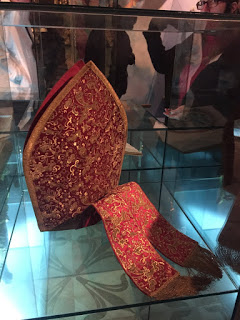 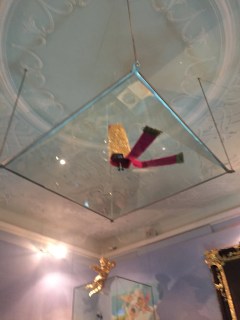 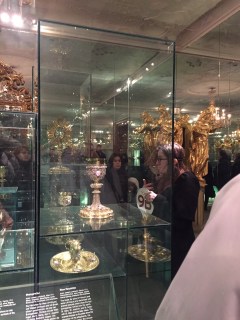 The exhibit did a particularly nice job of gradually moving visitors from the monochromatic world of the abbey at its start to the glittering opulence of its existence in the 18th century.  At this point, all the walls are mirrors, perfect for the selfie culture of the 21st century.

You need to lock away such precious belongings and an interior cut-away of one such storage chest suggests the elaborate systems of this time might have inspired JK Rowling’s Gringotts vaults: 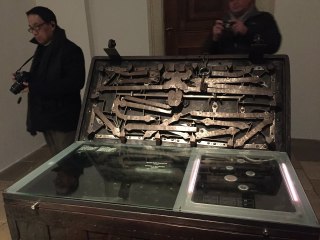 One room was dedicated to extraordinary double sided tableau that served as Biblical storytelling iconography for the local population, who–like most in their world–could not read.  They could decode the stories and messages themselves and the monks could use them as reminders of dos and don’ts.

Of course, as time went on, those ministering to the people lived increasingly less like them.  The similarity of the ornate, over the top, rococo paintings from Passau to Melk (and later to Vienna) showed how connected these cultures were.  One traveled from city to city and picked up a desire for the same designs, the same color palettes, the same architecture.  Turns out that Pinterest was always with us.

The chapel within the abbey takes it to a whole new level.  Among the reliquary is a glass casket that houses the (claimed) bones of a saint.  Apparently, when the demand for saint’s remains began to outstrip demand, it was declared that those buried near sanctified sites could also count and bring the living closer to God.  So, in some cases, they were dug up and acquired by churches and abbeys.  Not at all creepy.

The skeleton is reclining comfortably, but how anyone can sleep in this riot of color and shine is beyond me. 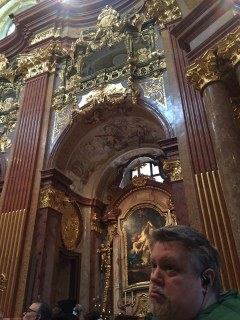 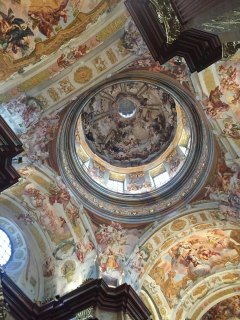 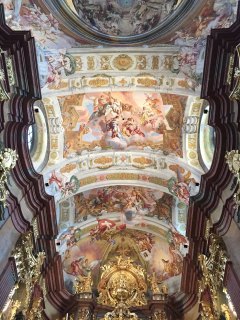 The room is designed along the principles of a theatre or opera house, with balconies and wings.  It even included a secret and screened entrance for Maria Theresa so that she would worship without being on public display. 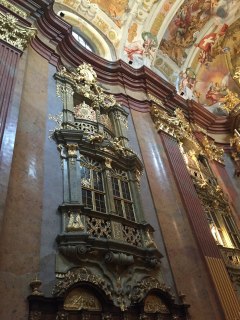 Sadly, we could not take photos in the Melk library, which was so well known that Umberto Eco included a reference to it in the Name of the Rose.  Harper and I thought it looked just like the Beast’s library and imagined ourselves like Belle, zipping across the three stories of books on ladders, singing about the power of reading.  The room holds only a fraction of the library’s holdings: apparently, if one read a book a day, it would take over 300 years to complete the collection.  Like every abbey, this one has secrets; they include some ingeniously hidden windows in the library, covered by secret doors perfectly designed to flow with the bookshelves and decorated in faux volumes.

The circular staircase leading from the library also holds a secret: a mirror at the bottom makes it seem infinite! 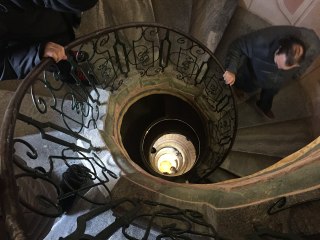 As does the view from the outdoor walkway to the library 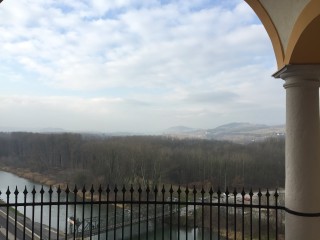 Passing through the gift shop on our way back to the bus, we felt every bit the red carpet royals fresh from a morning of contemplation and conspicuous consumption.

That afternoon, the Baldur made its way to Vienna, passing though the gorgeous Wachau Valley, Austria’s wine region.  The vineyards are cut into the hills and look like steps up the mountainside.  Sadly, the day returned to muddy skies and the temperatures dropped in the mid-twenties.  So, we caught the views from our lunch table. 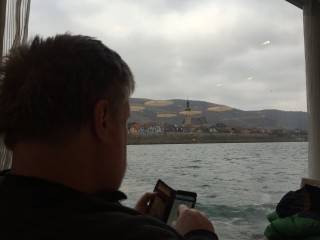 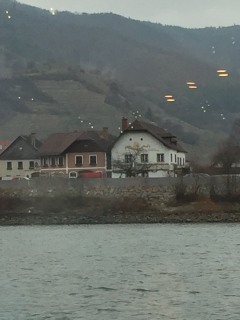 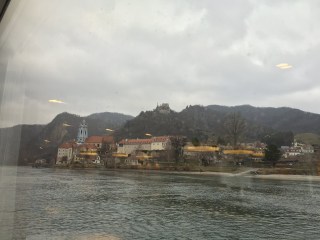 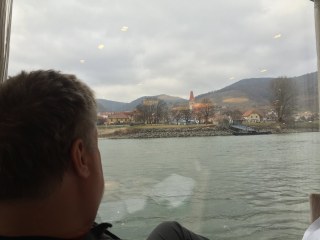 All in all, not a bad lunch table view!  This stretch, even in the heavily clouded sky, shows the remarkable loveliness of the VRC: we were just sailing by, enjoying coffee and conversation after a fantastic lunch, while looking out over the small towns, villages, and vineyards that dot the Austrian section of the Danube.  Seriously!  Craz-mazing!  Loved it!  And, if that weren’t enough, I found a smiling house: 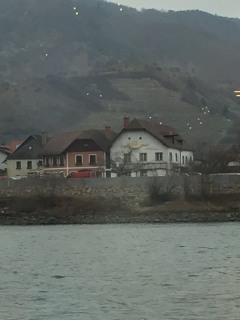 Later in the day, we began making our way through some more locks and some more strudel–which was being demonstrated by our chef.  The locks lend themselves to some really cool visuals.  I was right against the window, finishing Infinite Home and mellowing out as the sun set over the Danube. 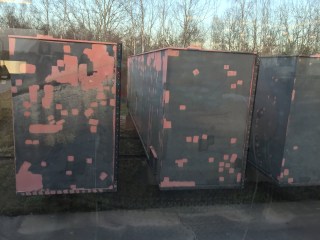 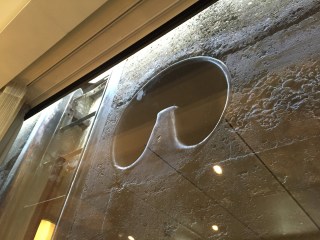 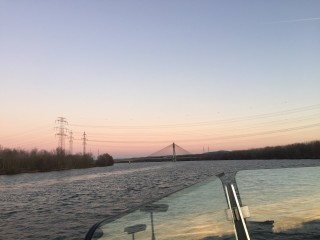 Dinner was all about the birthday girl!  They greeted her on the way in and surprised her with a special cake, which tasted like a light apricot smoothie.

As we were eating, another Viking ship pulled up right next to us and we saw ourselves through a looking glass.  It got very close.  Turns out that when the boats pull next to each other like that, the crew has to close the curtains, but we snapped these before then. 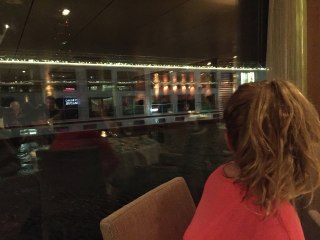 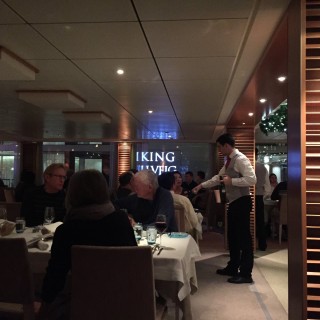 Harper found another surprise waiting for her in our room: 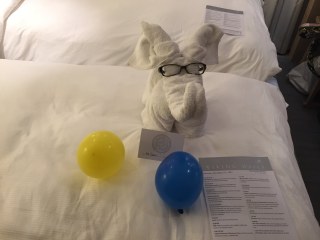 And, as we turned in, the city of Vienna sent us a welcome greeting, hinting at what awaited the next day.

From the hills of Melk to the bottom of the locks, Harper’s 14th birthday was unlike any other.  Thank you, VRC, for making a special day even more magical!