By luck, the Loveless Cafe was between Nashville and our next (and last) stop, Memphis.  What was once a side-of-the-highway motel and cafe has been turned into a much larger cafe surrounded by gift shops and shady nooks. 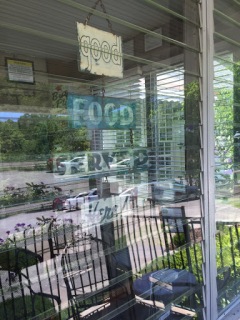 We got there late enough to enjoy breakfast or lunch–and the best biscuits we would eat on our entire vacation. 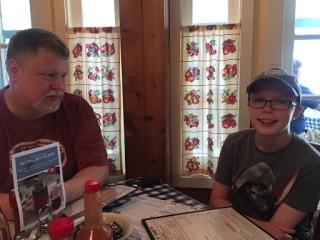 After watermelon ribs, fried chicken, pancakes, and two plates of dense yet light biscuits, we waddled to some well-placed rocking chairs for a sit before setting off for Memphis.

Poe and FN-2199 (Riot Control Trooper) amicably served as our co-pilots as we shot down I-40 and encountered no rain, or even clouds.

We got in a couple more hours of Station Eleven and introduced Ned to Sunflower Bean.  By the way, I’m now a back seater because Penn’s legs are so long and I don’t care if Harper puts her feet in my face.

At one of our pit stops, I noticed our car came from Miami.  Circle of life.

Ned discovers the joy of a french fry and biscuit sandwich.

We thought it only right to make Graceland our first stop.  Confession–none of us are big Elvis fans, but really, one cannot come to Memphis without making this pilgrimage.  My dad was in Memphis when Elvis passed and brought back a newspaper.  By then, Elvis had become something of a punchline.  As a high schooler, I thought of Elvis as some old man; now, it’s sad to think that he died so very young: 42.  On the drive down, we talked about how oddly parallel the lives of Elvis and Prince were–cross-genre musical geniuses who became increasingly isolated, felt freedom on stage, and medicated themselves heavily to make that magic happen.  Fame is a bitch–and genius only makes it worse, I guess.  Anyway, on with the tour.

Aside from the fact that it’s on 13 acres, in many ways, Graceland seems much less a mansion than a big house with a fancy entry way: living room, dining room, kitchen, family room, finished basement, bedrooms upstairs and in-law suite downstairs.

The house is a 1970s time capsule, but even for that era, it is done up a bit.  Sofas are a bit too long; two mirrors where one (or none) would do; lots of gilding; lots of patterns; lots of shag.  But, even with this, it feels like a family home, not a showpiece estate.  Elvis was trying so hard.  It was really touching. 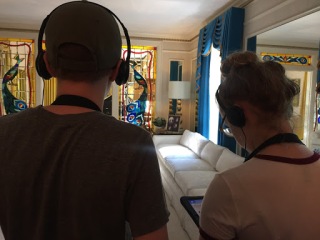 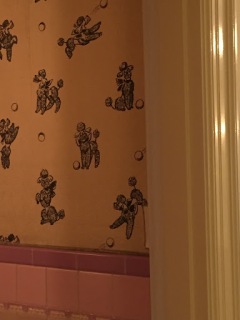 The tour is self-guided via iPad multimedia and narration by John Stamos.  Yes, Uncle Jessie.  John told me that, when she’s in town, Lisa Marie still will have family dinner at Graceland.  Not sure about that.

This is the kitchen carpet.  Best 1970s pattern ever!

State of the 70s art security.

The Jungle Room–green shag on the floor, stairwell walls and ceiling.  John shared that Elvis once converted this room into a recording studio, which struck me as a bit sad.  Like he didn’t even feel he could leave the house to record.  Maybe if I hadn’t heard that he routinely showed up to RCA Studio B around 10 pm and didn’t hit his stride until 2-4 am, I wouldn’t have felt that way, but walking through Graceland feels like walking in half light.  The kitchen and Jungle Room are very dark; the basement rooms are windowless.  Time stands still in more ways than one here. 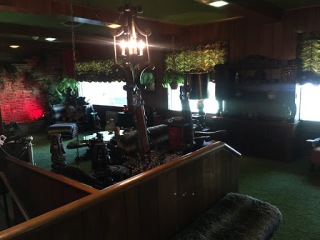 Here, one of Elvis’s monkeys gets a bead on Penn in the media room.

Which, of course, has a mirrored ceiling.  Um.  Okay. 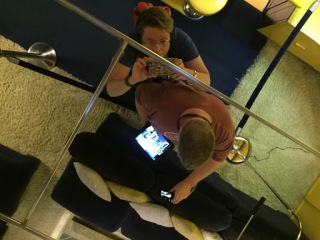 The Pool Room is completely covered in fabric–walls and ceiling; I think John told me it was over 300 yards.  The pattern is pure 70s hippie chic. 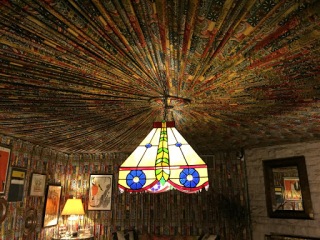 The grounds also include other rooms.  One is devoted to gold records and exhibits from various stages in his career.  Elvis was the real deal.

Trying to be a movie star was–in my opinion–a horrible mistake.  It turned a dangerous, rebellious, revolutionary artist into Frankie Avalon. 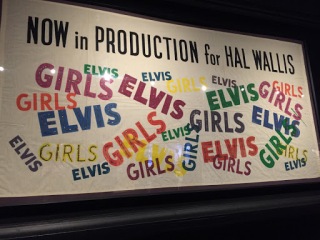 One wall in the “Trophy Room” is covered in dozens of cashed checks Elvis wrote to local and national charities.  Every single check was for $1,000, not a penny more or less.  That’s about $6,300 today.  Elvis’s heart was in the right place.

The pool below has taken on a less frolicsome air now that it also serves as the final resting place of Elvis, his parents, and his grandmother (who outlived her entire family).

The floral arrangement in the bottom right was actually sent to Graceland from a florist.  It made me wonder if this happens every day.  Pre-recorded John Stamos had no answer.

I don’t usually see a gravestone copyrighted.  Oh, Elvis, I, who want nothing from you–not even a peanut butter and banana sandwich, want to give you a hug.

We navigated from Graceland to our hotel just steps from Beale Street, where debauchery goes when it wants to party, and across from the Gibson guitar factory.  We were far enough from the action for our hotel and room to be quiet while still being within walking distance of most of the places we wanted to visit.

As it turned out, our room overlooked the FedEx Forum. Go, Grizzlies!  Better luck next year.

It was time to hike off in search of some delicious Memphis BBQ at one of the town’s best, Central BBQ.  Much of Memphis has seen much better days, but the downtown core is actually in the midst of some significant gentrification and revitalization.  We learned that downtown Memphis now has more residents than Denver or St. Louis.  However, as we walked up Main Street, we saw all the signs of rebirth but one: people.  Seriously, we wondered if something was up as we seemed to be the only people on the street (see below).  Still, the walk was lovely on a still warm yet not oppressively humid Southern summer night.

Not all flowers should be picked.

The city is alive with amazing street murals.  This one, commemorating the sanitation workers’ strike, was among the longest. 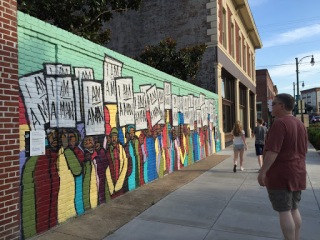 This one actually had artifacts attached to the bricks, like makeshift tools and instruments.

And, finally, we made it to Central BBQ–an unassuming exterior hiding something very special.

What can I say?  It was smoky and yummy.  Maybe what sets Central apart are its sauces.  They’re made in house and kept and served warm: an unbelievably sharp yet sweet vinegar; a tart mustard; a sweet and deep regular; and a kicky hot.  The buns are also really good–glossy topped and broad enough to soak up the sauce and juice.  If there’s one Southern food I would have with every meal, its green beans.  Central’s were perfect–wide, flat, salty, firm yet tender.  Harper opted for half an order of pork nachos, which was enough for her to share.  The downtown location combines the right ratio of ramshackleness with comfort, and the staff is spot on.  Eight thumbs up for Central!

One of the reasons I really wanted to go to Memphis was the Civil Rights Museum, which is located at the Lorraine Motel.  But, honestly, nothing prepared me to walk out from dinner and see this sign … right there … and know what was around the corner.

It seemed right, though, to come across the horribly iconic location at twilight, when a solemn and respectful quiet ruled the space.  In fact, the only sound seemed to come from the educational stations located in the plaza in front of the hotel.  We had planned to come to the museum the next day, so standing here making peace with it was a good way to start. 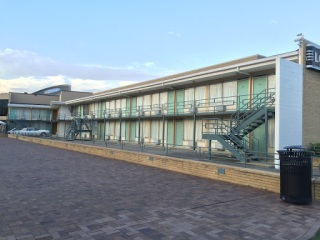 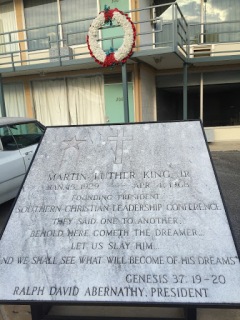 We walked away from the Lorraine through a courtyard that highlighted key figures in the Civil Rights movement.

The Civil Rights Museum is near a non-profit, “Facing History,” so walking around the plaza, one is constantly reminded of that call.  And, in Memphis, history is really all around.  I’ve never been in a city with more historical markers highlighting both the good and the bad.  Several markers told of opportunities and historic sites lost.  It was as though Memphis had learned that icing over a rotten cake didn’t work.  It also begins to explain why Memphis is home to the Blues.

Perhaps appropriately, right across the street from the museum’s courtyard, we found the Blues Hall of Fame. 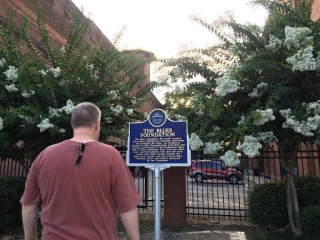 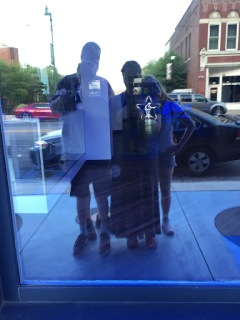 We though we’d work off dinner by walking to dessert and then to the river.  Memphis is famous for its donuts, and a newer shop had just opened downtown.  So, we took in the art and artifacts on the other side of Main Street.
We gave thanks.

Made some joyful noise.

Reaffirmed the bedrock of our family. 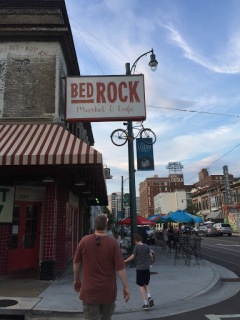 Stopped by the theater. 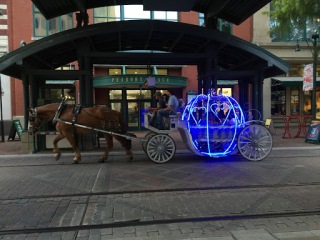 Art was all around … 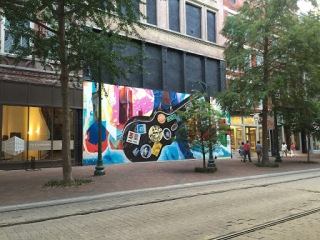 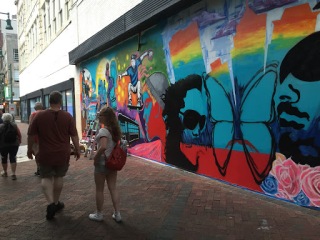 As were exotic gods and …

At the end of our rainbow … 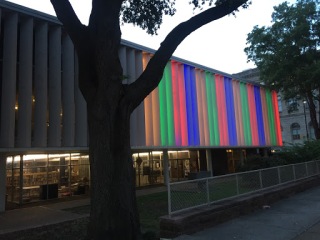 the sunset led us … 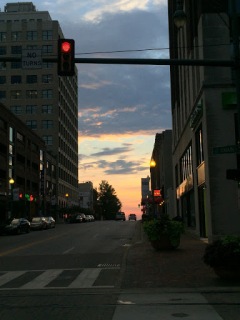 to the mighty Mississippi River! 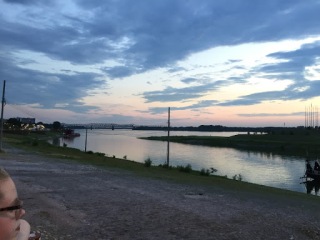 With all the places we have been, Harper and Penn have never seen the Mississippi, so we paused to take it all in.  The river looked falsely smooth, hiding its power beneath a glassy surface. 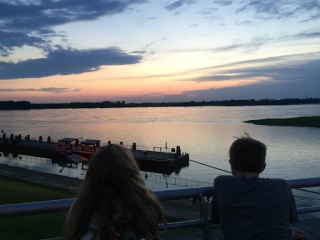 They couldn’t resist running closer, heading down the stairs to the historic cobblestones that once eased the way for wagons transporting cotton to Front Street.

We came across the Beale Street Landing park, which offered a nice resting stop for us and a nice running like crazy stop for the kids. 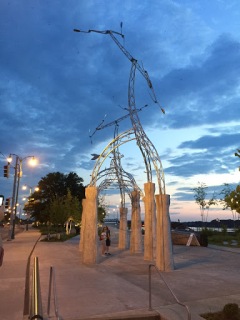 The bridge in the distance links Tennessee to Arkansas.  Only Tennessee completed the lighted span.  Apparently, Arkansas used the funds reserved for its half of the bridge on a dog track.  Oh, Arkansas.

After one of our longest and most full days, we started walking back to the hotel and made a quick pass through Beale Street.  Among the street entertainers were young men who somehow did six consecutive back flips half way down Beale.  More than tip worthy! 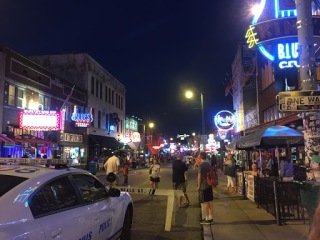 We found the home of Memphis’s other King. 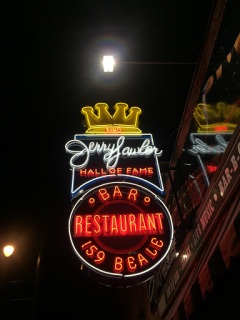 Boys will be boys.

And, then by the light of the Gibson sign, we called it a night.  Good night, Memphis.  We already love you tender. 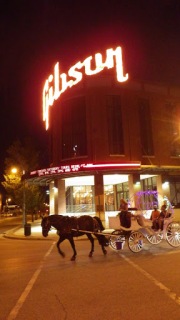