The Past Is All Around Us

In researching the trip, I found a Rockabilly Tour of Memphis–two guys with vintage cars who started their own business.  You may recall Harper’s love of vintage cars; this rose to the very top of her “to do” list.  To be fair, we all thought it would be really cool.  And, it was.  Well, it wasn’t actually because 1955 era cars don’t have AC, even on 90+ degree days, so we all enjoyed the stretches when Brandon (our guide) could gun it and create an awesome breeze in back. 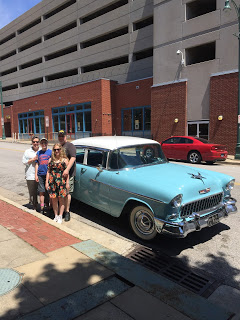 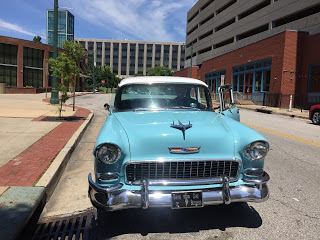 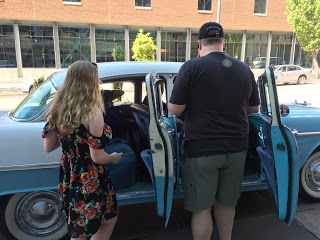 Brandon is a musician, a transplant from Pittsburgh, who has managed to pick up a very strong Southern accent in about a decade.  He’s a huge Elvis fan but indulged Ned’s interest in Johnny Cash by adding some Cash specific sites to the tour.  He also indulged my questions about gentrification and urban revitalization and was open about how far Memphis has come but how far it still needs to go.  Harper just loved riding around in the car and getting honked at 🙂 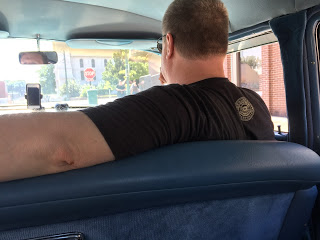 Brandon and his partner might buy another car, a Rocket 88 that is currently in use in Memphis for the filming of the upcoming CMT “Million Dollar Quartet” show and then add a MDQ tour.  We did the Memphis 101.  We got an up close look at both the car and an early tragic bit of Memphis history–yellow fever. 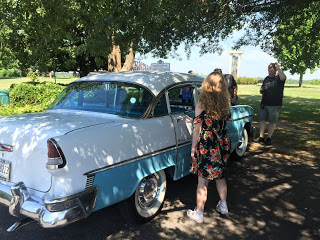 The sign may be too small to read, but in 1878, fully 2/3 of all white people living in Memphis died of yellow fever; less than 10% of the African-American population died of the same illness.  The entire town was quarantined, and apparently, anyone trying to leave was shot dead because no one understood that mosquitoes not people spread the illness.  The impact on Memphis’s population was such that it lost its city charter.  Most of those caring for the ill whites were black, and history shows that this kindness was, of course, repaid.  Oh, wait. 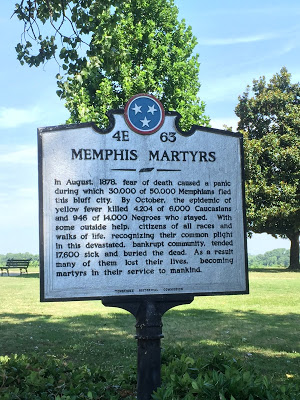 The monument to the martyrs. 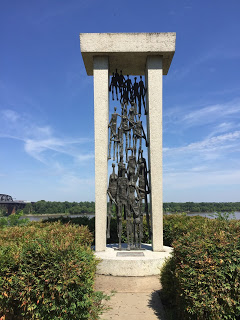 This park sits on what is called the “Fourth Bluff” of the Mississippi, which provides a great vista of the river.  Across the “great muddy” is Arkansas, more specifically West Memphis. 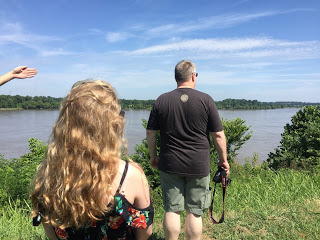 That’s Brandon on the left.  Behind him is a set of three parallel bridges, the middle one is a train track (we even saw a train pass as we stood there).  Back in the day, thousands would gather on the bluff to watch the trains pass. 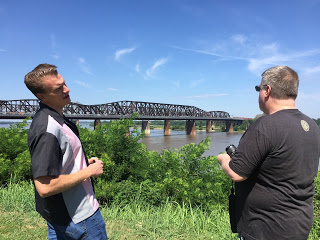 Brandon also shared another story we had never heard: the story of the Sultana.  The Sultana was a Mississippi River Boat.  After the war, the government had promised $5 per enlisted man and $10 per officer to any captain willing to carry the soldiers, previously POWs held by the Confederacy, north.  Designed for about 375 passengers, because of the extraordinary financial incentive, the ship was actually carrying over 2400 passengers.  As it passed just north of Memphis, its boilers exploded.  An estimated 1800 passengers died as the ship sank.  Wow!  About 300 more people died in the sinking of the Sultana than died in the sinking of the Titanic.  Historians believe that the proximity of this disaster to the assassination of Lincoln and the subsequent killing of John Wilkes Booth overshadowed its magnitude.
As we learned more about the history of Memphis, we began to understand why it is considered the home of the Blues.  Its past is filled with tragedy and determined resurgence, tragedy and determined resurgence–exactly the structure of the Blues.
One of the individuals behind the resurgence of Memphis after the yellow fever was an African-American businessman Robert Church, one of the first black millionaires.  He survived the Memphis Race Riots of 1866, vowed to stay in the town, and then made much of his money buying undervalued properties following the 1878 yellow fever.  Church began the first black-owned bank and even underwrote the bond to restore the city charter.  The park out the window below is named for Robert Church.  At one time, its grandeur rivaled Central Park’s.  Church spent his own money to build the park for Memphis’s African-Americans.  This was the first time I had heard Church’s story. What we don’t know.

Brandon zipped us through the start of the Blues and key figures, Elvis’s first Memphis home (two blocks down from B.B. King!), the history of Beale Street, the growth of Millionaire’s Row, the club scene of the 1970s and 80s, the limited success of the Grizzlies, and the renewal of downtown.  He recommended restaurants and was impressed that we already had eaten at or were planning to eat at most.  And, he worked in the site of Johnny Cash’s failed car salesman job, door to door sales territory, and first gig in a church basement.  It was a great way to spend an hour! 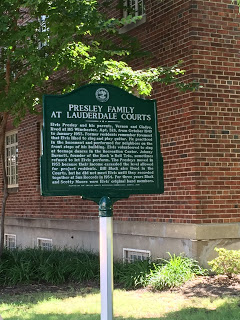 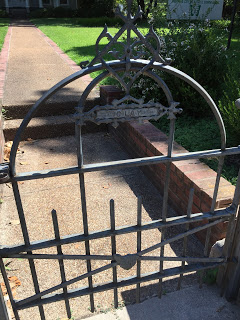 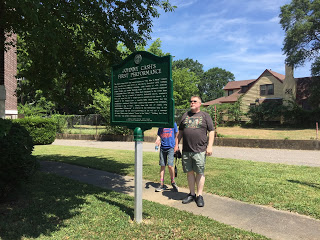 Brandon picked us up and dropped us back at our hotel, the Westin.  When we had checked in, we noticed a lovely case of Gibson guitars and thought it was just decorative, given that the Gibson factory is across the street.  Upon closer examination, however, Ned realized something astonishing: guests could check them out!  Along with a virtual amp.  For free.  The phrase, “Kid in a candy store,” came to mind.

Kid with candy.  We tried to convince Ned to take a guitar and one of our plastic cups from Central BBQ out to Beale Street than night.  Harper exclaimed, “People would definitely give you singles.”  He graciously chose to accept that as a compliment.  Penn offered to take a cup and recite extended passages from “Mad Max: Fury Road” for tips, but we demurred.

After a musical interlude, we walked to lunch at a health-conscious restaurant (!) called LYFE Kitchen.  We were uncertain how to eat the crisp green items on our plates, but we struggled through.  The restaurant is in another reclaimed building, the old Chicsa Hotel, which has been converted into condos.  (This will become important in tomorrow’s entry.) 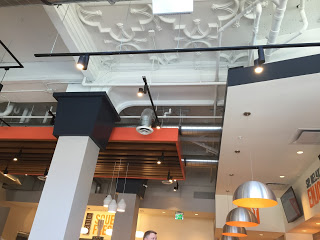 You’ll notice the Dylan/Cash shirt on Ned.  His was the only suitcase in which clean clothes seemed to multiply because of all the hip t-shirts he kept picking up along the way.

Our lunch stop was on the way back to the National Civil Rights Museum. 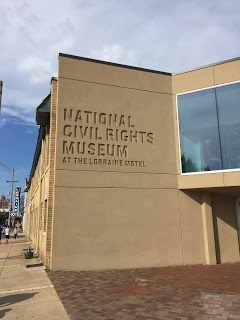 I took very few photos in the museum.  It just wasn’t that kind of place.  Each exhibit was powerful, painful, and real.  At the very end of the tour, you stand in the space that formerly held room 307 at the Lorraine Motel and look both into a reconstruction of Dr. King’s room (306) and out the window onto the balcony.  All the while, Mahalia Jackson is singing “Precious Lord.”  This sign reminds visitors of the proper attitude, and to me, it summed up how one should view the entire experience. 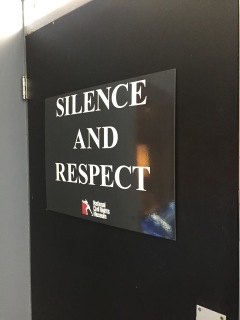 As we walked through the exhibits that lead up to this moment, I heard a different song in my head: the refrain to “It’s Quiet Uptown,” from Hamilton:

What we saw was unimaginable, yet it happened.  I lived through the timeline of many of the events depicted, read about them, have seen the images, but somehow never felt them as the museum made me feel them.  I was not alone.  At one point, Penn came up to me and asked how I was doing.  I told him, “Okay.”  I asked him if he was okay; he responded, “I don’t know.”  After we left, Ned said he had been looking at a panel on church bombings in Birmingham, which happened so often the FBI called the town “Bombingham,” when an older African-American man pointed to one of the churches and said, “I used to go to that church.”  Unimaginable.
After walking through the long and brutal march of history toward civil rights and economic justice, we were called upon to take action, to see ourselves in the models before us and fight for others.

I’m really not sure how to express how much this museum meant to all of us.  We’ve been to many, many museums.  This one is important.  Go.

Across the street from the Lorraine museum is a second building called the Legacy Building.  You enter through this gate, which features words from Dr. King’s last speech.

Oddly, though, almost the entire Legacy building (which turns out to be the boarding house from which James Earl Ray is said to have fired the shot that killed Dr. King) is devoted to the shooting and to various conspiracy theories about the killing.  It seemed at odds in tone and content with all that came before.  But, Ned observed that it did allow one to decompress after such an intense experience, so in that, it served an important purpose.

A short walk from the museum is Memphis’s famed Gus’s Fried Chicken (now a chain), which sounded like a good place to eat away our feelings.  Of course, along the way, we saw even more street art.  Seriously, the game of street murals in Memphis is it.

The original Gus’s is a rather run down hole in the wall on a far-from gentrified block.  It looked like an oasis to us.

We got one of the few open tables; ours was tucked right up against the juke box.  Our waiter was incredibly affable and social; he was attracted to Ned’s Dylan/Cash shirt, he’d seen Dylan many times and talked about each show; he had much to say about the inefficiency of managers and management in general; and he brought us two slices of pecan pie (all that were left) because one didn’t have enough pecans.  We loved him!  We also loved Gus’s–slightly spicy, battered more than breaded, and served with creamy mac and cheese (finally, one that met with my children’s approval) and awesome seasoned fries.  The only negative to the meal was that Ned tried to seize the entire coconut pie slice and wound up dropping it on the floor.  And it was the last one!  Damn you, management. 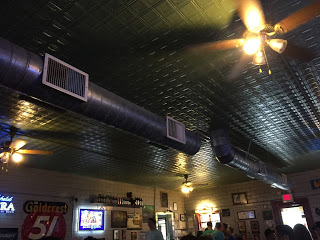 Of course, when we left Gus’s, there was a long line.  I don’t know how we “manage” to time things.  We must always be too early or too late.  But it works.
Look, it’s the King. 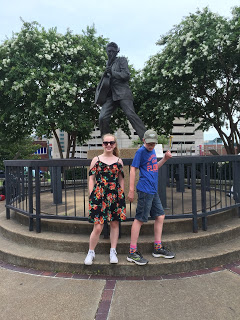 Right next to this statue there were competing Italian Ice vendors.  On one van, as Harper pointed out, the word “Ice” was in parentheses, like maybe it wasn’t really ice at all.  On the other, which was actually a passenger minivan with a hand lettered neon poster board sign, ice was not in parentheses.  This one also sold cheese danishes.  We passed on both.
We entered Beale Street a bit further up than before and found the street’s marker.  Both the side with a bullet hole and the side without. 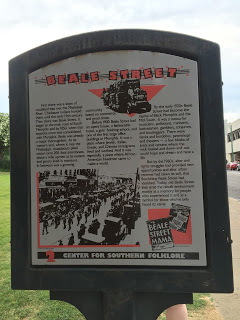 Outside the Starbucks by our hotel, we found a Post-It bombed car.  Nothing bad–just birthday wishes.  Happy birthday, red car person!

The kids made good use of the decorative barricade sports balls that line the plaza leading to the FedEx Forum.  According to Rockabilly Brandon, visiting teams stay at the Westin (which is literally across the street) and then bus over to the forum–across the street.  Keeping it real, NBA!  Fun fact, this marks the second summer we’ve stayed at a “visiting team” hotel.  Last summer, it was the Pfister in Milwaukee. 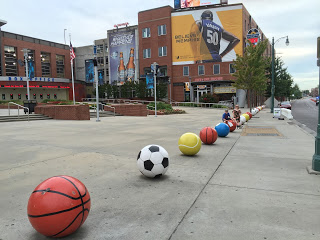 The Memphis Rock and Soul Museum is adjacent to the Forum, hence the marker. 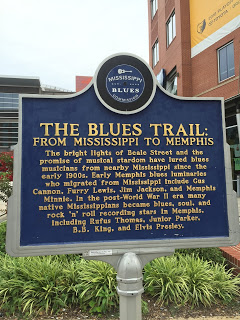 This trail apparently led right through our hotel room. 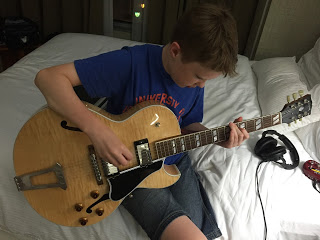 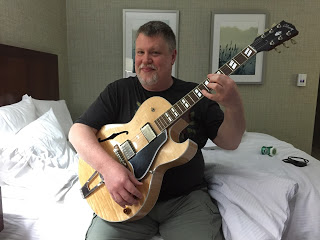 Does the guitar below look different?  It is.  Ned traded out guitars three times during our stay.   Seeing these two generations of Davis rockers trade the guitars back and forth was delightful. 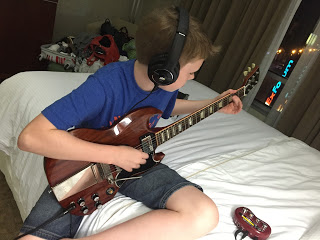 Good night, Beale Street.  Today, the past was all around us; we learned and felt history; you made it real, Memphis.  Thank you.