Our first morning in Dunedin, I was up before everyone and in search of a Chemist (pharmacist) who might help me find eye drops that worked.  On my way, I searched out an open breakfast place and found Modaks Espresso–a colorful, quirky hole in the wall.

We were in various states of awakeness as we fell into our seats.  Some, not so much: 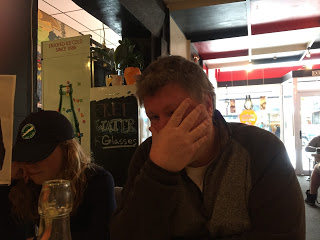 Some full on and fueled by iced coffee–which in NZ always seems to be made with ice cream:

To identify your table, you’re given an image of a celeb.  We could ID Prince, Fresh Prince, and Carleton; the last left us baffled.  Rando NZ dude?

Breakfast was big and bold: waffles with bacon and fried bananas; breakfast burrito with spicy salsa and chorizo; more bacon with avocado and corn fritters.  Yum!

We split up after brekkie, with Harper and I going shopping for NZ teen clothes, and Penn and Ned off in search of NZ Funko Pops.  Everyone’s got their something.  Harper’s favorite store was surf/skate themed with individually decorated dressing rooms ID’d by skateboards.

After a bit of shopping, Ned set off in search of our rental car so that we could drive up the coast to Oamaru, home of NZ’s Little Blue Penguin. 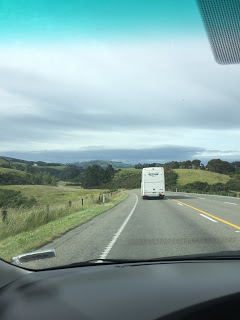 Our thought was to simply follow the cars in front of us to assure we were always on the right–that is, left–side of the road.  NZ being NZ, we went dozens of kilometers at a time with no other car in sight.  Eerie.

The coastline was dotted by far-spaced, sparsely populated towns, which seemed even more isolated under an increasingly grey sky.  This cute building used to be something called The Cheeky Fox.  Now, it’s just an empty but charmingly painted storefront. 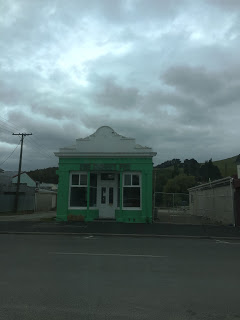 The road moved closer to the coast, revealing the ocean on a dull, blustery day. 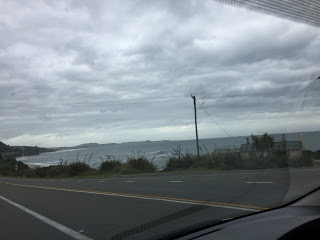 It meant we were close to the Moeraki Boulders!  The boulders are mysteriously round and regular, and have been recorded in the area for over 150 years.  They were on our to-do list as a pit stop on the way to Oamaru.  We pulled off with a goal of pulling on our hiking boot for a trip down the beach line to the boulders.  One of us did.  (Um, foreshadowing.)

The beach itself was mysterious from the get-go, with artfully placed mounds of driftwood damming up tidepools and rivulets. 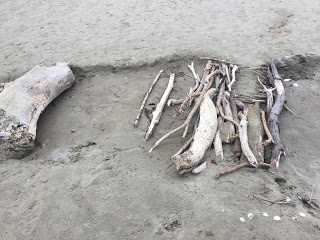 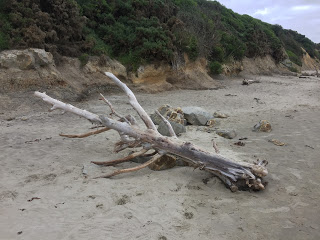 As Ned and I explored, we could see our sneakered children wandering right into the water, which might not have been a big deal if we didn’t have hours of outdoor penguin watching still to go.  Sigh.  (Um, foreshadowing.) 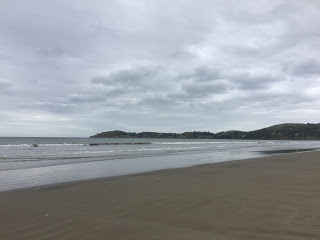 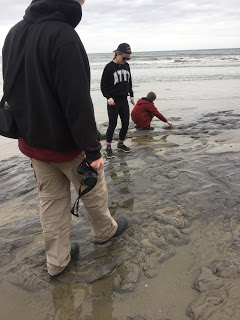 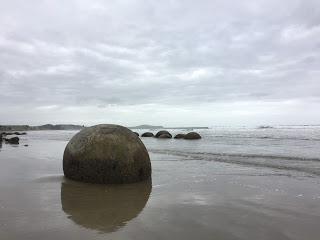 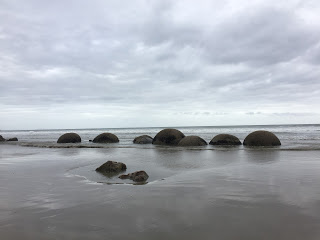 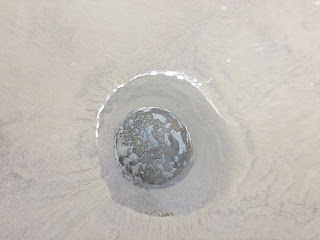 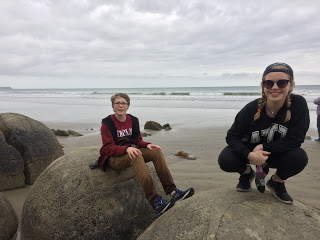 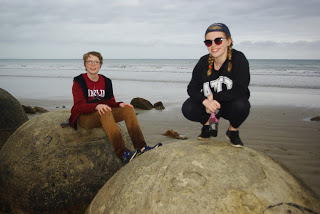 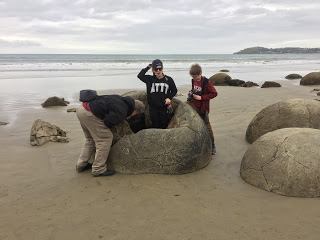 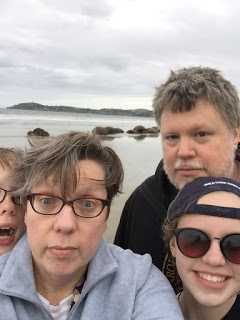 Oh, look, my hipster daughter shot in haunting relief against the stormy, cold beach in her newly purchased NZ sweatshirt. 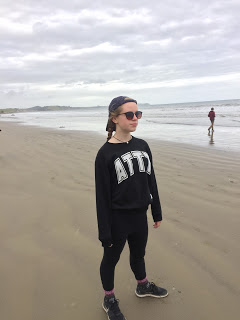 Oh, look my son jumping leaping from the sandy cliff, no longer wearing his nice warm wool socks because they were soaked through.

Oh, don’t look, because if you did, you’d see me–the only one in waterproof hiking boots–flat on my ass in beach quicksand, boots filled with cold sandy mud, socks gritty and wet through as I tried to rescue my son’s socks from a tide pool when they fell out of his pockets as he leapt from boulder to boulder. Urgh.

I rinsed my boots and socks in the frigid ocean water.  Dusted off my bum.  Gave up on saving my dignity.  And had a lovely, direct, and informative conversation with my children.  Ah, the joyfulness was over.  Not cool.  Not fun.  Mood as dark as the beach skies.  Super-Urgh.

We still had a bit of a drive to Oamaru for a formerly-fun-filled family penguin watching.  We solemnly and squishily walked back up the beach to the car and drove away in stormy silence, feeling the day was ruined.  Utterly, wetly, ruined.  Mega-Urgh.

After a miserable drive, we reached Oamaru, which–side note–has become ground zero for the Steam Punk movement.  Because NZ.  Looking for a blimp-steam locomotive mash-up?  Oamaru.  Hand-bound books about bird goggles? Oamaru.  Tea dueling and Tesla-Con?  Oamaru.  If we hadn’t been steaming little punks ourselves, it would have been charming.  We just grunted.

We saw the sign that told us we were in the right place, if not the right frame of mind: the Oamaru Penguin Colony.  Great, whatever.

We stomped our way to our seats in the viewing stands, bundled up in fleece and raincoats for the cold temperatures and even colder rain that began to fall soon after we arrived.  Our toes and noses were freezing.  Urghiest-Urgh.  And the woman behind us was doing nothing but bitching loudly about us for standing, about other people’s kids for walking around, about other adults for taking forbidden photos–all while her own kids were crabbing non-stop about being hungry and cold.  This was going to suck.  Suck, suck, suck.

A single blue penguin made its way steathily up from the ocean, wobbling over the rocks, climbing the cliff, and bobbling directly in front of us–looking this way and that, pausing, and then rushing toward its home in the colony.

We saw a penguin … a penguin, like, two feet from us!  It was tiny and blue and adorable and huggable and magical!

Was it raining?  Was it cold?  We couldn’t say because our brains exploded.

Would there be more penguins?  Where were they?  Could we just see this one again, like a million times?  Did it have friends?  A family?  Wasn’t life amazing?  Wasn’t OUR life amazing that we could see a wee blue penguin just walk right past us?  Wasn’t this the best day ever?  And, wait, did they just say we’d probably see 200 penguins?  How could that be?  How could we survive seeing 199 more perfect little personality-filled wobbling, bobbling penguins within an arm’s reach?  How could we survive not seeing them?  How did we live this long without seeing them?  Without hearing them call to each other in their squawky-cranky-angry-scolding-gossipy penguin voices, yelling at the slow ones, shouting for the missing ones, claiming their spaces in the colony, telling each other about their day at sea? Without watching some make a mad dash for the colony, some skulk in slowly, some swagger with well-deserved penguin-power confidence and others toddle oh-so-cautiously with their little blue heads on a swivel, always watching?

Over about 90 minutes, we saw hundreds of penguins arrive on the beach, hop-climb up the rocks, and toddle past us into the colony, each with its own gait, personality, and ability to make time stop, hearts swell, and the night warm.  Because the blue penguins are hesitant and shy, the colony did not allow any photography or filming (“No Electronics!”).  Luckily, I can fill in with this Google images and this video:

We couldn’t leave Oamaru without adopting our own little blue penguin (LITTLE BLUE PENGUIN!!!!!!!) and without running through the 24 hour McDonald’s because we were starving.
Oh, and we did steal one photo from the red-lit area in the back of the colony because … LITTLE BLUE PENGUINS!!!!!! 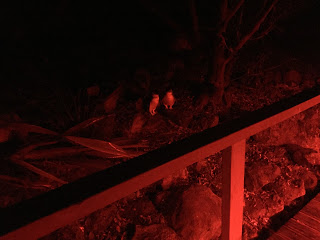 The drive back to Dunedin was rainy and long and exhausting, but thanks to the healing power of little blue penguins, all was right with our own wobbling, squawking family.