From South to North for New Year’s

After a lovely New Year’s Eve sleep, we started packing to make the flight from Queenstown to Auckland.  Our AirBnB host was super nice about letting us leave our bags in the apartment until we left, so we were free to search out breakfast along the lake.  We had heard good things about the Public Kitchen and Bar, and the idea of starting the new year off basking in the sun was ideal.  The service was superb and brekkie was wonderful: chicken and waffles, pancakes, thai curry (for our non-breakfast breakfaster), several Americanos, yum!

Note Penn’s new hat.  Somehow, somewhere, he lost his much-beloved Mammoth Caves hat, so we found this one for about $11 US.  Same color and theme (parks).  To whomever found the MC hat, I hope you enjoy it as much as he did. 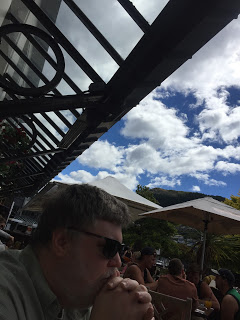 We had made great use of the NZ Super Shuttle service while traveling around the islands.  It’s basically a passenger van with a hitched trailer for luggage.  Ours was scheduled to pick us up in plenty of time to get to Queenstown’s airport, which is just on the outskirts of town.  But, as we stood outside our apartment waiting, waiting, waiting, and then waiting some more, we began to worry.  New Year’s Day traffic seemed a bit fierce, and our ample cushion of time was ticking away.  Any cab that drove by was full.  We saw plenty of these vans drive by–they belong to Wicked Campervans and are an acquired taste. 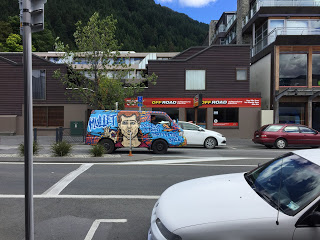 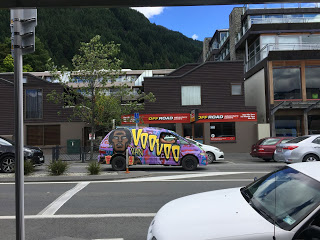 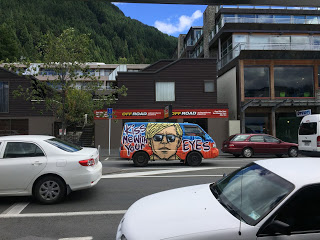 Ned began walking down the street to try to flag anyone who seemed willing to drive us to the airport.  I started planning for alternatives: scanning for later flights to Auckland, thinking about calling our AirBnB host to see if we could just stay another night.  Finally, the van arrived.

We pulled up to the airport 25 minutes before our flight left.

We checked our bags, passed through security, and got to our gate with 15 minutes to spare.

I was so freaked about making the plane–unnecessarily it turned out–that I forgot my laptop in security.  The NZ version of TSA wandered from gate to gate asking whose it was.  My kids opened it up, saw the coffee stains, and claimed it.

And with that, we said goodbye to the South island and rounded home to finish up our trip on the North island.

The Davis-Gransden-Pollard-Davies contingent lives in Auckland, so it seemed fitting to begin and end our vacation with them.  Trying to get a sense of the city, we booked an AirBnB out of the downtown commercial hub, in the Murray’s Bay neighborhood.  It promised a short walk to the beach and to its little town center.

As we pulled into our temporary neighborhood of truly gorgeous homes, though, it kind of seemed we were in the middle of suburban nowhere. 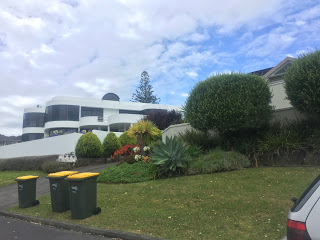 Luckily, we checked in with our host, who shared how to get quickly to the beach and then into town.  Just a few minutes to either.  Sweet!

Our rental was the ground floor of her home, fronting the lovely backyard and outfitted with a little deck filled with greenery.

Feeling more secure about our surroundings, we walked into Mairangi Bay Village for dinner.  It was a charming ghost town.  We realized: New Year’s Day.  Duh.

We saw a street placard: “OPEN THAI.”  Nuff said, we’re in.  The workers at Pattaya Thai actually seemed a bit shocked to have customers … their only customers for some time.  The food was perfect, the sunny evening lovely, and it felt like we had been dropped into the perfect place at the perfect time.

Well, almost perfect.  Preparing for the days ahead, Ned bopped two doors over to withdraw some cash.  The ATM promptly ate his card.  Hmm … losing one’s ATM card, which is also one’s credit card, on New Year’s Day half way around the world.  Breathe in, breathe out, breathe in, breathe out.

He began a long and useless call attempting to get his card back.  Was the card seized in error? Yes.  Could he get it back? No, it was shredded in the machine.  Did they have any advice for him, since he still had three days in NZ and no ATM card? No. Were they sorry? Yes.  Like an absurdist two hander set in paradise.

We had brought our swimming “togs” with us to dinner, and just around the corner as the conversation continued, we saw Mairangi Bay.  It was like a scene out of Moana (the kids listened to that soundtrack over and over on the trip).  Ned kept at it, and we made a run for it.

The water was warm-ish with lapping waves that deftly covered how far out the shelf actually went.  At one point, I saw a kid doing handstands about 25 feet out into the bay and realized that it was really shallow for some time.  When we arrived at the beach after dinner, few were there, but as the hours went on, the place really filled up: families, walkers, dogs, swimmers, paddle boarders.  The rhythm of beach life. 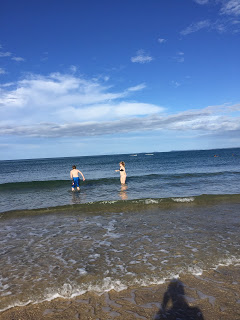 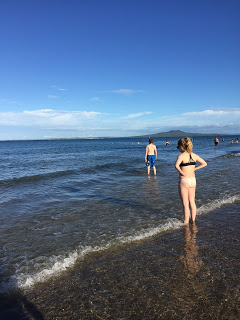 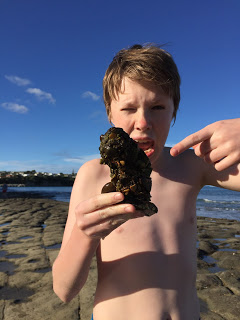 Eventually, Ned gave up, hung up, and we resolved NOT to use my ATM card in any machines for the remainder of the trip.  This left him free to enjoy the beauty of the bay and remember his obligations as Davis family chief. 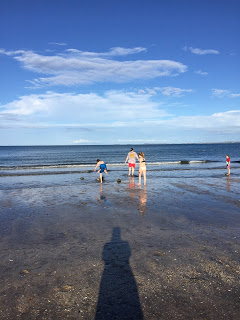 The face and feet behind the camera. 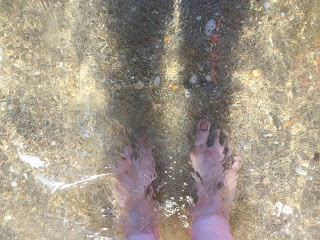 Part of the beach is sand but as the bay shifts from Mairangi to Murray’s, the sand disappears and is replaced with a moonscape of eroded lava rock and what seemed to us like baby Morokai Boulders. 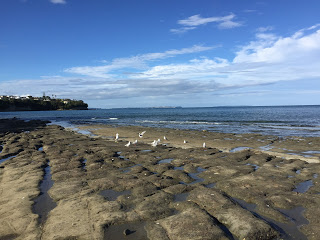 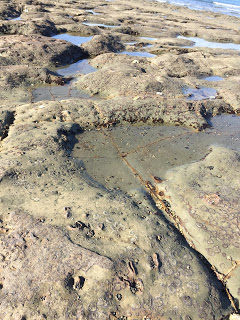 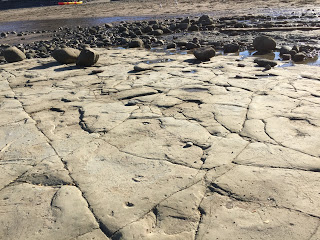 As the sun set a bit, the cliffside cast the rocks into a lovely black-blue, with the eddies reflecting the brighter blue of the sky.  We went exploring amid the craggy and smooth shelf and found tiny fighting crabs and foot warming pools. 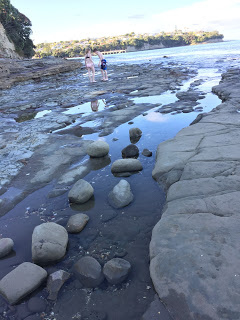 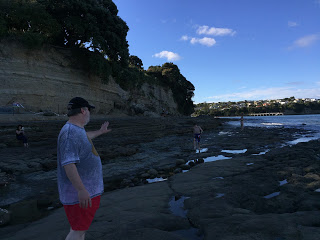 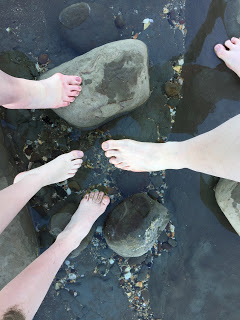 As our shadows grew longer, we knew it was time to head home.  Our host had recommended the cliff walk, so we climbed the grassy hill to get there and had to stop to watch NZ life pass by.  We agreed it was really quite nice to be staying in a real neighborhood, where real people lived and played.

The cliff walk did not disappoint.  In the twilight, the beauty of NZ nature seemed stark and surprising, set off by the ever changing blues of the bay and sky.  Silhouettes would give way to splashes of color, twisted branches to bending stalks.  The shapes and colors were outsized and unusual.  Just lovely upon beauty upon gorgeous. 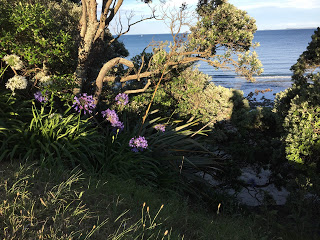 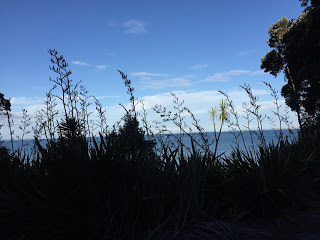 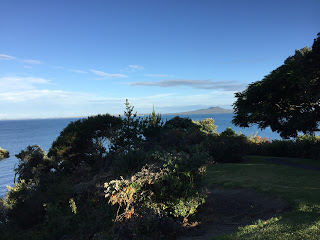 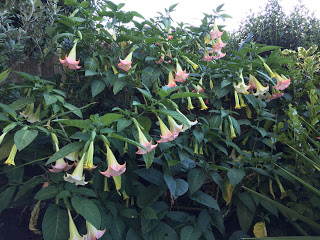 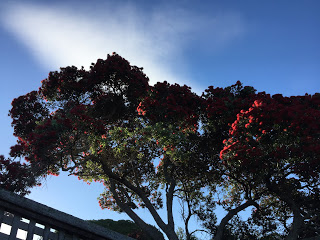 The cliff walk ran right through our neighborhood, and after turning off it, we were steps from home.

Our rental had two bedrooms, a large bathroom with a square toilet, a comfy little living room with an L-shaped sectional perfect for lazing after long days and a Netflix-equipped tv perfect for–as it turns out–binging Arrested Development.  Throughout our stay, we ended each day curled up on the sofa drowsily watching the show’s last network season.  Imagine us all doing the chicken dance in our tiny Murray’s Bay living room.  Ah, our family, we do take ourselves with us, don’t we 🙂