Exploring a Hometown Not Our Own

The first morning of our stay in Murray’s Bay, we followed some neighborhood walkers and found an even faster route to the village! 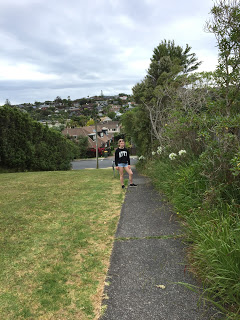 The night before after dinner at Pattaya, we had popped our heads into the Montrose Cafe, looking at the menu and chatting with a waitress about GF breakfast options.  Turns out the cafe is super serious about GF and food allergies and had a whole menu!  (We’ll never win the lottery, but our luck on vacations is seriously amazing.)

The same waitress, Zina, recognized us when we came in for brekkie.  She was super friendly and chatty, so we got to know all sorts of things about her.  Fun story: Zina’s never been to the US but went with her family to Mexico a while back.  They were in a small town and wandered into what they thought was a restaurant.  Turns out it was the club of a drug cartel; her uncle talked them out of it.  A few weeks later, they saw the same place on tv: it was the home base of El Chapo.  We loved her!

Why does she make these faces?

A few Americanos and a full breakfast later, Ned’s niece Jennifer, her husband Kent, their sons Trey and Cody, and their dog Molly picked us up and took us on a tour of their hometown: Auckland.  We passed Lorde’s school (in a fairly tony suburb) on their way to a steep drive up Mount Victoria, the highest volcano on Auckland’s North Shore, for a great view of the city. 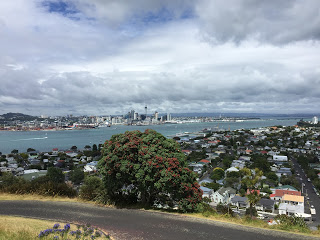 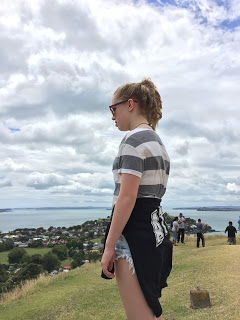 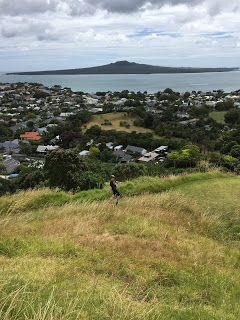 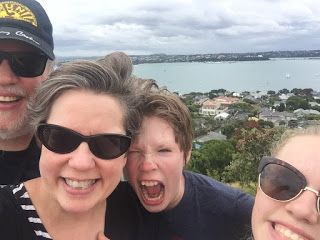 Mount Victoria has a history as one of NZ’s coastal fortifications.  In the late 1800s, NZ feared an invasion from Russia–which seems to have been largely unfounded–that led the island nation to start fortifying its defenses.  Then, in WWII, NZ faced a much more real threat from Japan.  One of its key defense strategies was the “disappearing gun.” Today, the remnants of these guns offer great climbing opportunities, and do their non-disappearing cousins (with our children’s non-disappearing cousins). 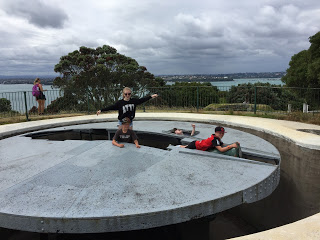 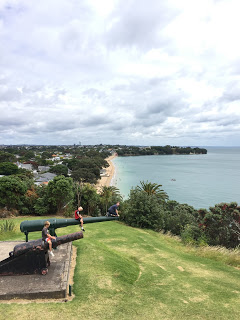 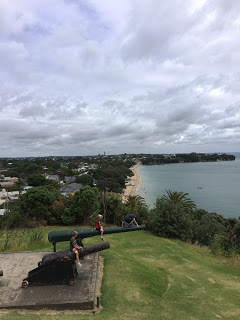 Yes, our son is the boy in winged Captain American socks sleeping on the artillery gun.  Why do you ask?

Mount Victoria is also home to a water treatment plant: these mushrooms are really vents.  So super cool–they appeared as if in some bizarre sci-fi landscape or a video game.  We loved them!!

Great for leaping (that’s Molly in the background). 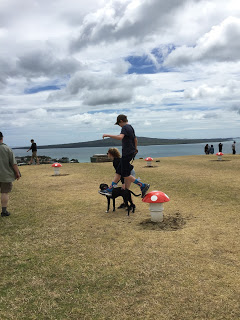 For doing whatever this is. 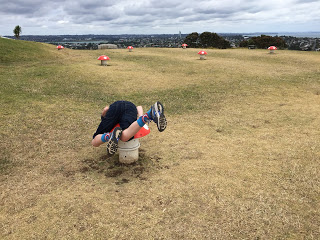 NZ is fairly direct in its warnings.

There is also a series of tunnels that run through the site.  Birthday boy Kent showed NZ bravery and walked right in.

I took the surface route. 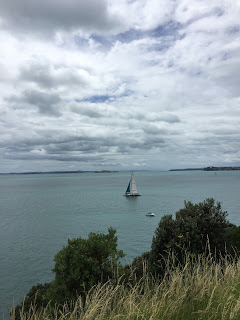 On the other side of the tunnels is another disappearing gun, this one also no longer operational but intact.  Again with the climbing.

After a morning of exploring, we were ready for lunch.  Jen took us to one of their family’s favorites: Torpedo Bay Cafe.  Somehow during lunch, Penn was drafted to be the Peter Pan of the lost boys at the tables around us, who begged him to give them tasks to complete on the playground next to the cafe.  This gave us time to lounge, lunch, and drink even more coffee.  Plus, we were able to plan Kent’s birthday dinner.  He had long wanted to go to Wildfire, in an area of town called the Viaduct.  Reservations done, it was time to get moving.

Though the weather had turned a bit gloomy, Jen and Kent wanted to take us to a North Shore beach.  We grabbed ice cream and took a stroll, trying to look at the grey day with rose-colored one-lens glasses.

Penn immediately took off for the water with his cousins. 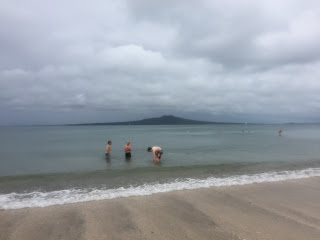 Molly was not allowed on the beach, so the rest of us took to the trees … well, really, to next to the trees. 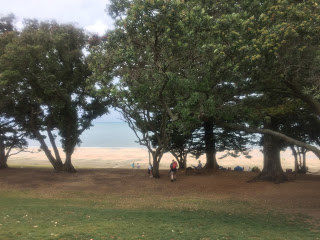 And, there, we found a playground.  The orange fence photo left is around a “hamster wheel” like thing where, according to Cody, some kid fell in the mass of kids and had some kind of accident that left all the kids bloodied with his blood.  It’s now closed–and like all fenced off, dangerous things, it drew kids like moths to a bloody flame.

Thankfully, there were other pieces of playground equipment that could injure children barred from the hamster wheel. 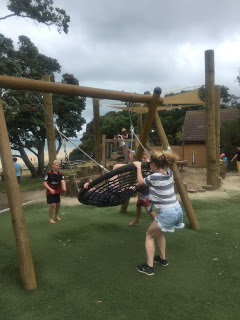 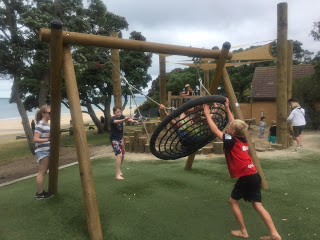 Enough with the potentially life threatening fun!  We zipped back to the apartment to change for dinner when it started raining, watched a couple more Arrested Developments, and then jumped in our Jen/Kent ride to head to the Viaduct.

The Viaduct is the Auckland harbor, developed with hotels, upscale and not-so-upscale restaurants, and an ice cream store featuring a milkable cow.

Dinner for 12? You bet! Wildfire worked perfectly for our large, diverse party–constant grazing and a loud room.  Yes!

Photograph by Jen (I was in the toilet, as they say in NZ.)

Plus, the kids were at the kitchen end, which meant they flagged every server for any reason all the time.

Our first full day of exploring a hometown not our own with our NZ family was done.  Happy birthday, Kent!  Good night, Auckland!