Our last day!  The Kiwi Clan picked us up and took us to Jen’s favorite cafe near our AirBnB.  The day was a bit cloudy but dining al fresco worked.  Oddly, we ran into our waitress from earlier in the week when we left our breakfast.  Zena was minding her parents dogs for the day and immediately recognized us.  Oh, NZ! 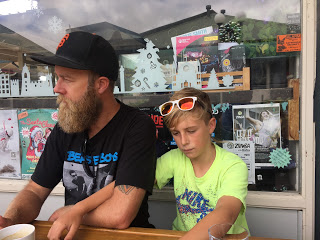 Earlier in the week, Kent had told us about Kelly Tarlton and his epic quest to build an aquarium in Auckland.  He said it was small and overpriced … but as readers of this blog will know, we love aquariums!  One of our earliest vacations with the kids (Penn still in utero, Harper about a year) was in Long Beach, and I’ll always remember Harper banging on the glass of the Long Beach Aquarium with her chubby hand trying to get the fish to come to her.  We’ve been to so many since then.  So, overpriced or not, we were going!

RIP Kelly Tarlton who had a crazy vision of building an aquarium out of discarded sewage storage tanks, who created a new way of shaping acrylic to create tank windows, and who was one of the very first to use a conveyor belt to move people oh-so-slowly through gigantic tanks so that sharks can sit on their heads and they can run backward to see the ray and turtle again.

Look at those puffy eyes and that cutie over my shoulder!

End of the trip yawn.

Part of the aquarium recreates Captain Robert Falcon Scott’s Antarctic hut–complete with wool socks, sewing machine, pantry and bunks.  It looked a lot like our basement 🙂 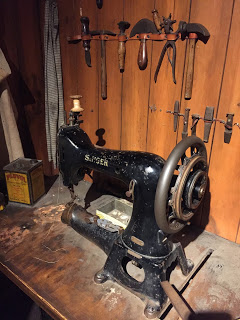 From there, we walked through a super-trippy “ice” tunnel that truly made us all feel like we were falling over.  By the end, I was closing my eyes.  Darn you, Kelly Tarlton.

The walk of terror was worth it.  On the other side of the tunnel was … PENGUINS!

This one took a fancy to Cody. 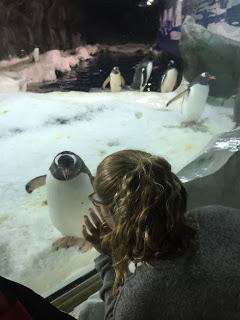 And brought a friend along for Harper. 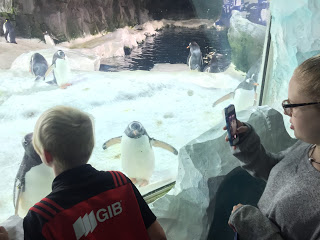 And, then a third so that Trey had a friend.

Penguins are the best!!

Though jellyfish are a close second–more balletic, but less cute.

Love the Brady Bunch themed light show.  We picked up a few more feet on this trip. 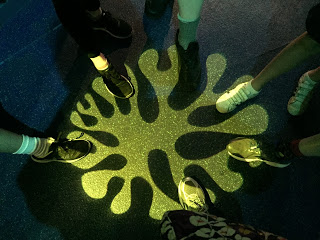 Part of the aquarium is level with the bay, with big waves whooshing up against the window.  A very nice touch!

In third place of aquatic cuteness, this anime-ish puffer fish.  Those limpid, large eyes.  So adorably pointy. We love you!

Tah-dah! The conveyer belt tube.  Unlike most aquariums, this moving sidewalk tube was sponsored by Moana (don’t think Mr. Tarlton would have approved).

And, Ned’s favorite … the uber-intelligent Octopus! 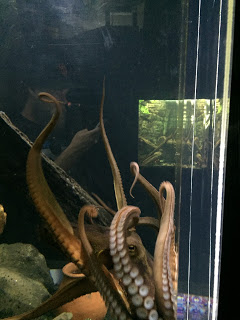 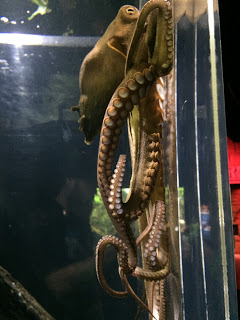 Plus, this crazy, super spiky, black hole creature that is here to poke us all with its inky black needles.  Hypnotic. 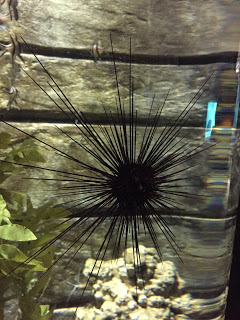 Too late–it has taken over the bodies of these two children. 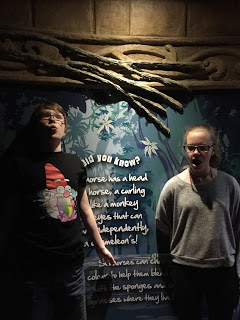 And, that, folks, was it!  We set off from Kelly Tarlton’s, grabbed one last Auckland ice cream … 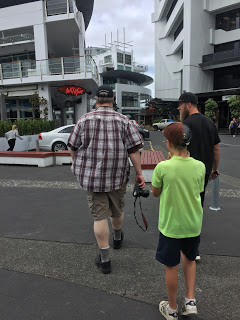 Then, a cab to the airport.

We climbed into jammies and settled into our super funky Air New Zealand Space Seats (soon to be removed from all planes, RIP Space Seats, we hardly knew ye.) 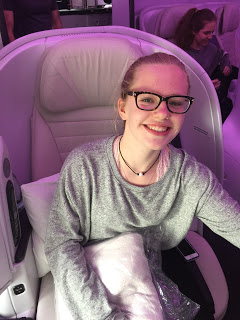 Air NZ welcomed us to the long flight home, and we pulled on our eye shades ready for a long winter’s nap.

Our layover in LA required several changes of terminals and much chaos.  Unbeknownst to us, LAX had been evacuated the day before, so lots of folks were crowded in trying to make up canceled flights.  Oh, and the AC was off for some reason, so everyone was in a super good mood.

We landed back almost-home in Toronto about an hour late and one bag short (it never left LA, as it turns out).  Sigh.  We were cranky, jet-lagged, starving, and cold.  The solution: Zet’s.  Instant love with a side of fries! 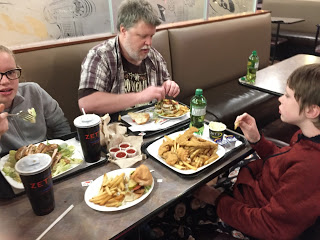 With filled tummies, we found our one-night hotel with a lobby filled with canceled-flight travelers.  The suddenly strong and whipping winds had scuttled all departing flights as we were on our unsuccessful luggage search.  So, as would most folks, I opened a pack of Mike and Ikes and drafted an OpEd at 2 am in a hotel lobby in a foreign country after traveling for about 24 hours while the love of my life waited in an unmoving line to check us in.  Family!

The next morning, after a brunch at Anchor Bar near our hotel (UPSTATE!), we drove back home.

Nothing could have prepared us for the raw, bright, muted, sunny, chilly, constant beauty of New Zealand.  Every day brought a different world; something we never imagined seeing or doing but now carry with us as a lasting, striking memory.  As we traveled, we adopted a can-do catch phrase from one of the Mad Max movies: “Okay!”

This airport has no taxis: Okay!
Our van is an hour late: Okay!
I don’t think any restaurant is open: Okay!
The ATM ate my debit card: Okay!
We can’t reach our AirBnB host: Okay!
There’s no AC in the airport: Okay!
One of our bags never left LA and won’t get to our house for another two weeks: Okay!

Now, “Okay!” is our shorthand for “nothing will ever really bother us anymore because we got to go to New Zealand, one of the most beautiful places on Earth, and are clearly lucky beyond measure.”