We had initially left our port day in Skagway open, just in case we needed to reschedule the glacier/sled dog excursion due to weather.  So, the night before, we found another excursion that looked good: a hike/float combo along the Chilkoot Trail.  Since this didn’t leave until the afternoon, we had the morning to laze around the ship and slow roll our breakfast, which we took on the covered dining patio on 11 aft. 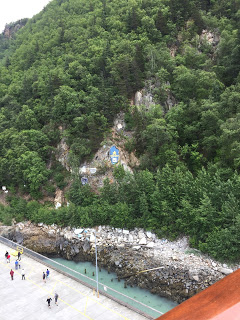 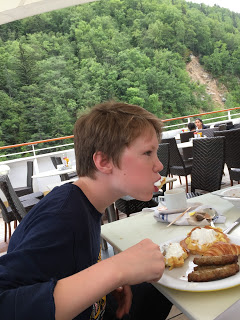 Our excursion was billed as a two mile hike on the Chilkoot Trail followed by a float back down the river to our starting point in Dyea.  Our tour guide John mentioned several times that the first 45 minutes of the hike would be the most strenuous.  He offered us hiking poles, which Ned and I took more for show because why would we need hiking poles?  Then, we saw that just the entry to the trail required a nearly completely vertical climb up a combination of tree root and boulder steps.  My first inclination was to run back to the van, but I didn’t.  By the time our group of hikers (9 including us) got to the top of the first rise, John gave us all Hiker Level 1 and encouraged us to begin de-layering.  Over the next 45 minutes, we climbed 350 feet and then descended the same via jagged rock, tangled tree root, and smoothed boulder steps. By the end of this first half of the hike, we were all Level 5s.  Given that on this scale, I think I started at negative 15, I took the 5 with honor.

John was a fantastic, motivating guide–praising each step that didn’t lead us to fall off the side of the trail, pausing when it was clear we needed it; offering us water out of his backpack when our own ran out.  Plus, he was a natural storyteller, which helped take our minds off of the next rise.

I didn’t take many pictures because my entire focus was usually on not falling off the path, but the scenery was lovely.  And, we really felt like we were doing something Alaskan: hiking a tough part of the Tongas Rainforest and pushing ourselves hard to do it.  Of course, this trail was built by pioneers and gold rushers, who walked it carrying huge loads of supplies–which put our accomplishment in perspective.  The ease with which Harper and Penn zipped through the trail made us equally proud and pissed 🙂 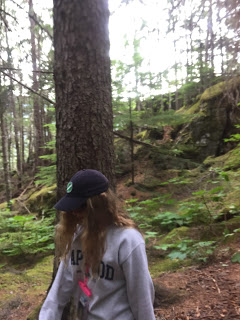 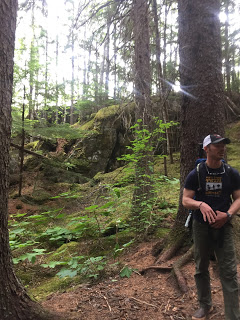 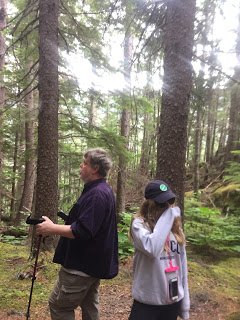 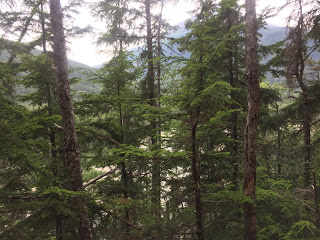 When we hit the flat part of the trail, it suddenly seemed like we could walk forever–everything was so smooth. We could also hear the river in the distance, meaning that the “float” part wasn’t very far away. 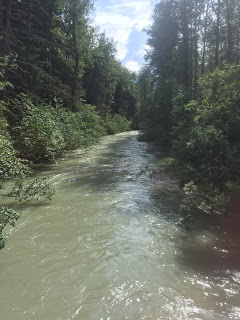 On the banks of the river, we traded our hiking boots for river boots and “sit and slid” our way into the boat.

After the heat of the climb, the cool of the river seemed icy, especially as the sun disappeared and the wind picked up.

The river’s current did most of the work, but John pulled all of our weights away from river debris–as he said more than once, “This is why I don’t need a gym membership.” 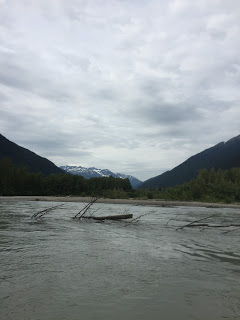 The wind really started whipping about halfway through our river journey, and I advised everyone to tuck their hats in their life jackets. 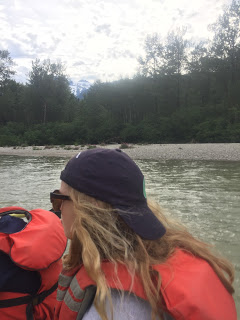 Because there’s so much bedrock in the rainforest, the trees grow in a thin layer of moss.  It reminded us of Milford Sound. 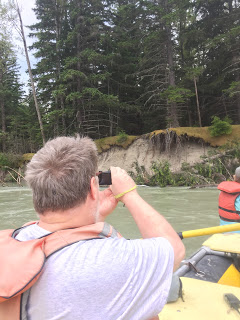 At the end of the line, we warmed ourselves with hot cocoa and got some dining recommendations from John.  Oddly enough, the Skagway Brewing Company had an extensive GF menu, and the hike had built up some serious appetites.  Match made in heaven! 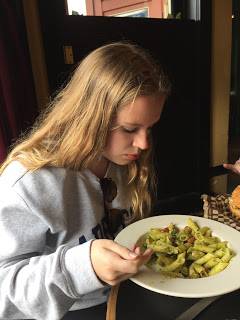 Skagway is a small town that almost looks like a film set, but it’s real–from the wooden sidewalks …

to this amazing building covered in driftwood.

We got back to the Sun just before “all aboard.” Our ship was docked at the very end of the walkway, the land side of which is decorated with boulders painted with ship names and first port dates. 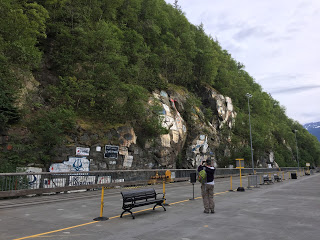 We were welcomed onboard by some cute towel animals, courtesy of our room steward, Rene.

The kids elected to skip the night’s show, but Ned and I enjoyed some solid R&B covers by Uptown.  From Stevie to Marvin to Prince to Bruno, they were on it.

The Freestyle Daily activities newsletter said it was Bollywood Disco night at Dazzles, and we couldn’t think of a better place for a Shanghai game than right in the middle of it! 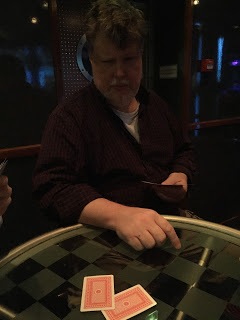 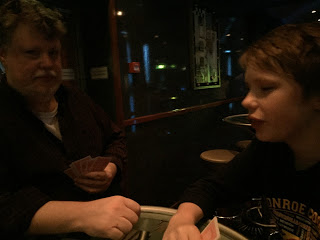 After closing out the disco, we took in another night’s worth of spectacular Northern beauty: snowcapped mountains, a million shades of blue sky, land, and ocean. 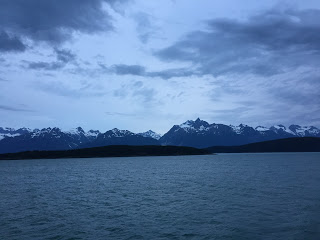 The raw power of the landscape around us made us believe we could do and be more.  Thank you, Alaska (and John)! We were ready to be level 5 sleepers–especially with an early glacier call in the morning.