There Will Be Glaciers

After our port visits for the past few days, we were on to Glacier Bay.  According to our Freestyle Daily, we’d be arriving at the bay around 7:15 am, so I was up and out on deck early in anticipation.  There weren’t many of us, and there wasn’t much to see.

The skies were grey and the clouds were low–making for some dramatically moody photos but no glaciers were in sight. 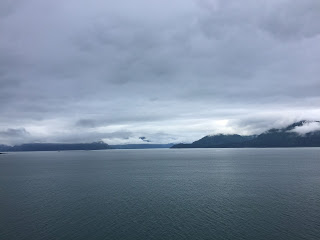 While the ship is in Glacier Bay, US Park Rangers are on board to answer questions, share information, and offer commentary about the glacier and the environment that produced it.  They tendered onto the ship early in the morning and set up shop in one of the lounges.  The map below shows the route we took into and out of the bay.

As the morning moved along, the decks began to fill with eager glacier hunters, and I ran back to the rooms to wake everyone up.  (One thing we realized on this trip was that we really need to bring walkie talkies on our next cruise.  Now that we’re all functioning adults and semi-adults with interests of our own, it was fairly easy to lose track of each other even on this smallish ship of about ~2000 people.)  Then, I ran back up to the deck in search of the first signs of a glacier.  In the distance, the bright light between the mountains was the initial hint.

As we got closer, the field of white-blue ice between the cliffs became clearer.

The ship began to approach the glacier from the side, and the cold of the water became visible in the slow, thick waves breaking the icy surface.  That thin light blue patch breaking the dark grey of the mountains is the glacier. 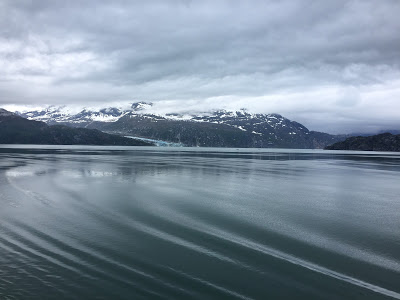 Chunks of glaciers will break off in what is called “calving“: the front edge/ledge of the glacier will break free, falling into the ocean with a force that creates a sound like thunder.  We heard and saw this happen at least four times that morning.  Before we saw any calving, though, we saw its detritus–an ocean seemingly littered with ice.  Notice the change in color as the level of light increases, seeming to change the surface blue.  Glacier melt also produces a huge amount of silt, sandy rock created by erosion which is embedded in the ice; this is churned up by the cruise ships, adding to the change in surface color. 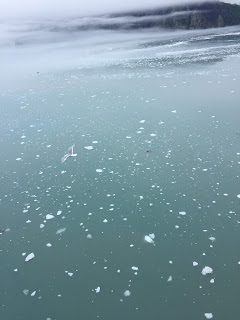 To give you a sense of perspective: I was on deck 11 shooting down on a typical seagull flying above the ice filled sea. 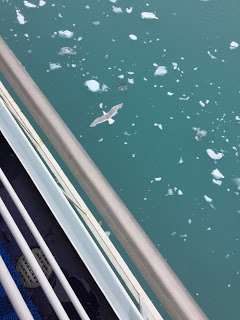 And, then, there it was! 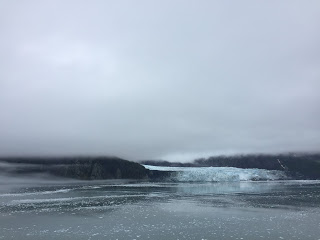 Let me pause for a minute to set the context: at this point, about half of all the passengers and many crew members are on the decks, but it is still eerily quiet.  People all around us were talking in fairly hushed tones such that even the clicking of a traditional camera seemed kind of loud.  It was clear that we all felt we were in a very special place and were privileged to see something magnificent and extraordinary.  To be sure, it was selfie central, but there were also hundreds of people pressed against the guardrails staring into the blue mystery of the glacier, oohing and ahhing at the thunder of the calving, smiling and taking it all in.  Just as we did: 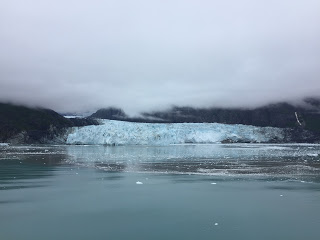 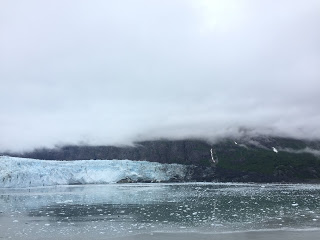 The ship stays in the glacier zone for some time, rotating to allow multiple viewings for everyone.  This also let us run in to grab some breakfast and coffee to warm up–made to order waffles and omelettes and one of the world’s best views.  The white tent below is the roof over the outdoor dining space. That’s a fantastic morning! 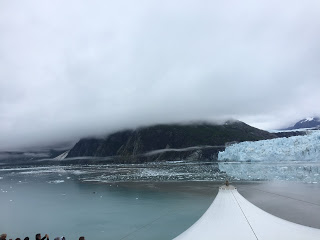 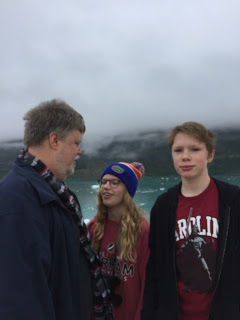 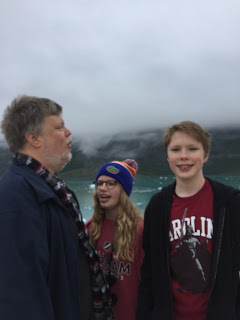 Then, to our disgruntlement, our glacial morning was over.

The Sun sailed on through some chillingly beautiful scenery 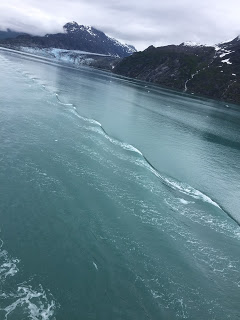 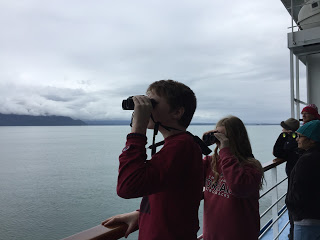 Within a few hours, the entire vista had changed.  Gone were clouds and grey, chased out by clear blue skies and bright blue waves.  Oh, Alaska, always surprising us.

.
We had reservations at the ship’s Brazilian steakhouse, Moderno, that night, and we found time before dinner to work in a game of Shanghai in the atrium lobby.

The plaques honor the first time the Norwegian Sun docked in a port.  Weirdly, the ship’s name was frequently misspelled–ah, fame is fleeting. 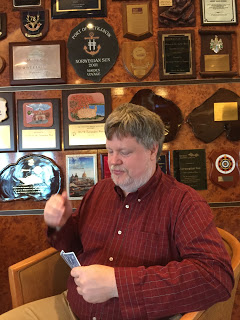 Dinner was delicious, and the service was impeccable.  We ate our fill and then some. 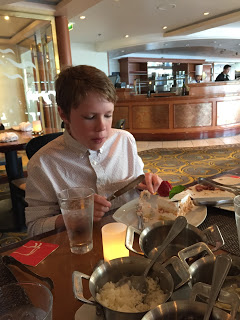 The weather had changed so dramatically since the morning that the kids wanted to head to the hot tub after dinner. 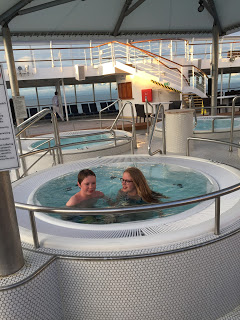 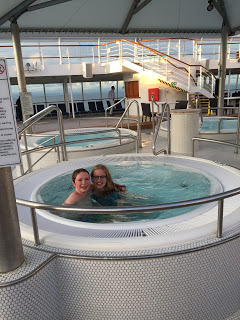 While watching them, we turned and saw this mysterious mountain range seemingly floating above the sea. 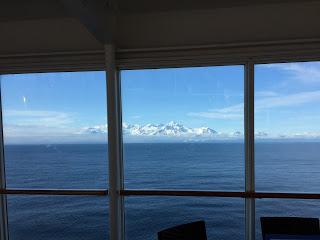 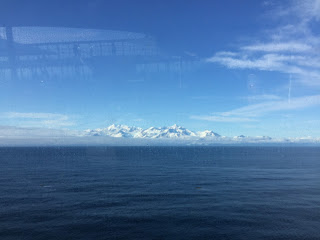 We made our way to the forward lounge to catch the evening’s sunset and watched the shift from clear blue to gauzy pastels as clouds streaked across the length of the sky. 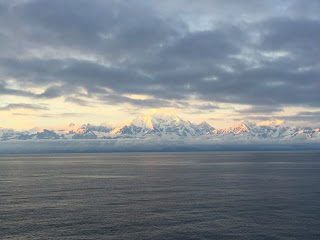 While this part of the sky was soft pinks and blues, the sunset itself was a fiery orange as it burned out in the ocean, heating the horizon. 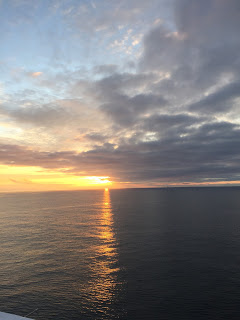 A golden goodnight to our glacier day.

Our second to last night on the Sun was filled with compelling beauty, courtesy of nature, and some adorable swans, courtesy of Rene.