Back to Vancouver and onto Victoria

When we landed in Vancouver–after a layover in Seattle–we were worn out.  Even the Alaska Air pilot’s inexplicable request for the entire plane to sing along to Journey’s “Don’t Stop Believing” on a 6:30am flight, generated little interest.  Once in Vancouver, we jumped in a cab with a driver who the travel gods clearly put in our path.  He asked us what we had planned.  We stared dumbly, um, we don’t know, like exploring the city and stuff.  Our turbaned guardian angel sprang into action.  By the time we exited the cab–back at our Hotwire-home, the Sheraton Wall Centre–we had our marching orders: 1) take a tour of the city; 2) take the ferry to Victoria and go to the Butchart Gardens; 3) walk the Capilano Suspension Bridge; 4) go to Goose Mountain. Thanks, random kind cab driver!  Though at that point, we just wanted to sleep.
At the hotel, I managed to talk us into a room super early (though the desk clerk slid me the key very surreptitiously, as she had just told several guests–all standing nearby–to come back around 3pm).  She even offered to give us a key to the health club on the day we checked out if we wanted to refresh, since our flight wasn’t until 11:30pm.  Thanks, random kind Sheraton agent!
As we walked into our cool, shade darkened room exhausted after another red-eye, we talked about possibly changing our flight and just heading home early.  Then, we all passed out.
About 5 hours later, we emerged from our comforter cocoons with renewed energy and a driving hunger.  Based on our cabbie’s recommendation, I called to book a well-reviewed Victoria/Butchart Tour that was unavailable online: the agent said she thought it was sold out.  But, it wasn’t!  We got four seats for the next day and set off for an entirely GF restaurant within walking distance: SMAK.  It was a bit hit and miss, but it was novel for Harper to be able to order everything on a menu and the smoothies were delish.
Then, we wandered down to the ocean and got a different look at Canada Place, where we had sailed from the week before. 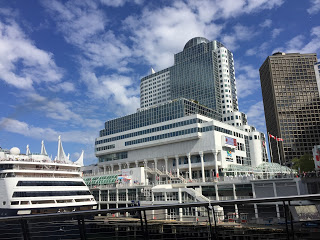 We also saw the Vancouver Olympic torch.  The first time we ever went to Canada after moving to Rochester was during the Vancouver Olympics … but we were in Toronto, basically the NY to Vancouver’s LA.  The kids were about waist high then.  It was fun to watch in the home country and get a VERY different look at the Olympics. 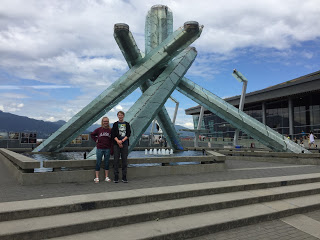 The tall skyline of Vancouver.  My vacation reading was Kevin Kwan’s Crazy Rich Asians series, which is so fun and goes down like delicious and addictive candy.  In the books, Vancouver is called Hongcouver because of the huge Asian investments in the city, which are omnipresent.  Much like Toronto, this Canada super-city is growing by the minute.

Armed with delicious gelato and sorbet, we started walking back to the hotel and made a detour for Japadog–the original Japanese hot dog.  The dog was okay but the garlic fries were fantastic! After a night of travel and an afternoon of walking, we imagined we might spend a low key night playing Shanghai and stopped at our fav, Shopper’s Drug Mart, for drinks and snacks.  Right next door: a great multi-story movie theater happened to be showing “The Big Sick.”  Yes!  We got our tickets for the night’s show and went back to the Wall for an afternoon nap.
It all added up to a great first day back in sunny Vancouver!
Our next morning began bright and early with an 8 am pick-up for the trip to Victoria.  Our driver, Herman, filled our group of about 30 in on Vancouver’s history and present.  A native, he traced the city’s boom to the 1986 World’s Fair, when a wider audience (especially from Hong Kong) discovered all that it had to offer.  Since that point, development has been nonstop with high rises replacing low rise dwellings on almost every parcel.  Vancouver is now among the most expensive cities in which to live, though we didn’t want to contradict Herman when he said it’s more expensive than NYC. Nope, our big apple is about 23% more expensive.  NY for the win!
The tour would take us on a ferry to Victoria.  We’ve been on ferries before but never got on them by driving–that was cool.  The 90 minute trip seemed much shorter, perhaps because of the local entertainment. 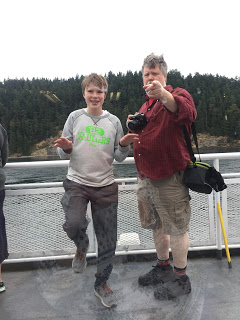 Everyone on the bus had been discouraged by the grey skies, but Herman kept telling us to ignore that–it would burn off by the time we got to Victoria.  He was right!

Our first stop in Victoria was the Butchart Gardens.  We knew literally nothing about the gardens before our cab driver mentioned them, but after looking up tours, it was obvious that they were a very big deal.  Herman filled us in on their history.  The Butcharts were entrepreneurs in the late 1800s whose highly successful cement business used up a great deal of limestone, some of which was quarried out of their own backyard.  This left a 50 foot deep hole that Mrs. Butchart decided to fill with a grand garden and from there is just spiraled out of control as she added a rose garden, a Japanese garden, an Italian garden, and more.  Today, over a million visitors come to the Gardens.  Now we know why: they are over the top in every possible way and just extraordinarily beautiful.

Perfect day for a garden party!

Harper said it was like we were walking into Alice in Wonderland. 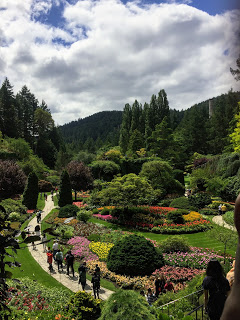 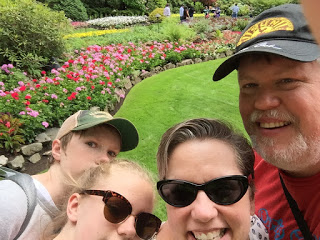 I have likely included too many garden photos in this entry but know that I probably took about three for each one that’s here.  And, Ned took about a hundred more.  Everywhere we looked was color, in every hue, tone, and shade.  The depth and richness of the display is almost impossible to capture, and the scent definitely is.  It just smelled fresh and bright and green.  Where in one garden, there might be a cluster of flowers, here was a field.  Where there might be one sculptured tree, here were a dozen.  We were wrapped and rapt in beauty. 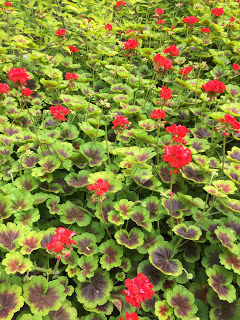 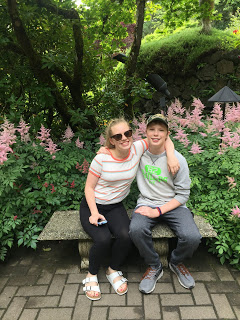 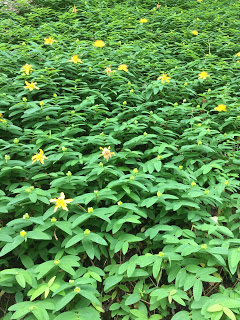 We emerged from the sunken garden on the bowered path to the rose garden.

Each bush is tagged with the rose’s name and origination date.  Our only regret is that the Dolly Parton rose was not in bloom–though everything else seemed to be!  It would have been a lovely reminder of our trip last summer. 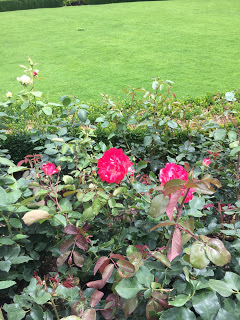 The path from the rose garden to the Japanese garden was lush with flowers growing from the bottom up and the top down, creating living tapestries and tunnels.

The transition from the rose to Japanese gardens took us from a riot of color to a million shades of green and brown with each shape refined and defined.  The garden was hushed with a watery soundtrack courtesy of falling streams and burbling fountains. 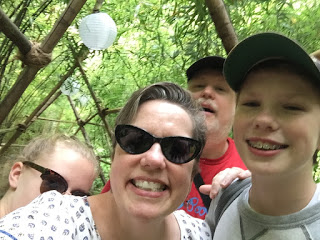 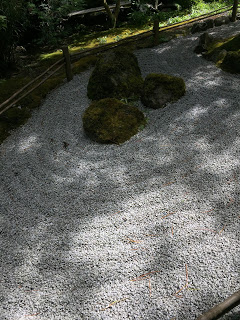 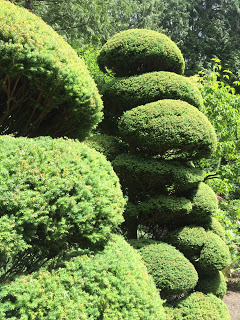 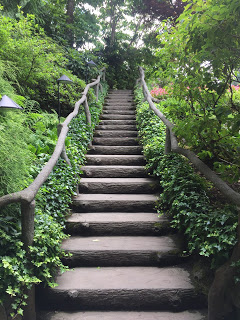 the Italian garden.  All compact symmetry, it starts with the star fountain, built to provide a home to Mr. Butchart’s duck collection. 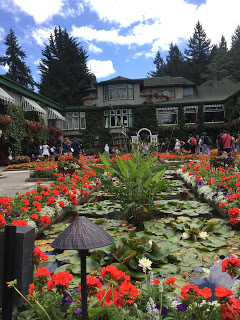 Going in to Butchart, Herman said that it would take about an hour to explore but we had two hours.  Exiting Butchart, we agreed that we could have spent another two, and it was clear why locals buy season passes.  We imagined how amazing it would be to come back in winter, when the gardens offer sleigh rides!  We were delighted to have had the chance to explore such a magical place.
Our next stop was downtown Victoria.  As its name might suggest, Victoria is the old fashioned sister of Vancouver.  But this sister comes by her style naturally: she came first.  Victoria is still the seat of government in British Columbia–though her main source of income is tourism.  Tours like ours come by the hundreds to explore this quaint seaside community that manages to mash-up influences from Europe and Asia as well as its First Nation past with a touch of Brooklyn-Hipster.  Herman drove us around the city center to give us our bearings and then let us off for a couple hours of exploration.
The first moments of our time in Victoria were unusual.  Walking toward the Joint, a pizza place offering not just GF crust but also vegan cheese, we heard a huge crash.  A tour bus, not ours, had backed into and destroyed one of the city’s lovely and very large vintage light poles.  Well, that was a first and thankfully it did not portend more disasters.  The pizza was delicious!
On our spin around town, the one part that especially intrigued us was Victoria’s Chinatown: it is second only to San Francisco’s Chinatown in its longevity.  After getting turned around (never ask me for directions), we found our way back to a very narrow passage that Herman called our attention to: Fan Tan Alley.  Back in the day, the alley led to opium dens and gambling; today, it’s hip shops and food. 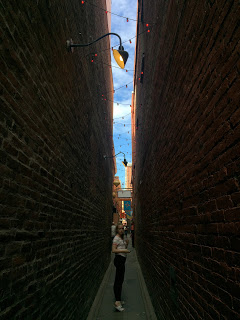 We found Kid Sister ice cream, which was not just adorable but also had a vegan chocolate! 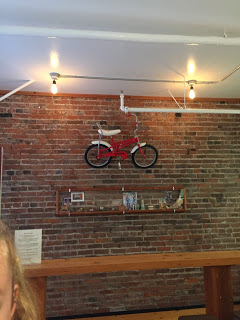 But with a decidedly Asian spin.

This tiny and fairly shabby alley-door really offered an alternate way to order noodle from the Fan Tan Café. 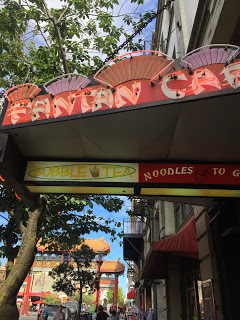 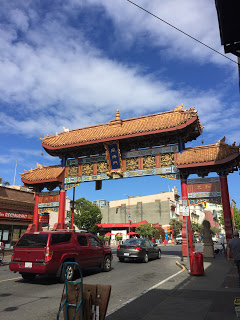 From Chinatown, we started our walk back to the bus pick-up area and took in more of Victoria, which combined a European square with a ocean flair. 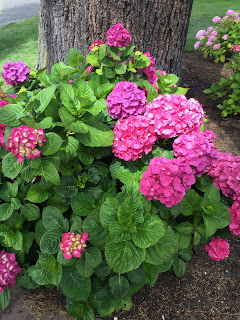 The Empress has been serving guests for about a hundred years.  It reminded us of the Royal York in Toronto, one of our frequent FanExpo haunts and where you’ll find us again this August. 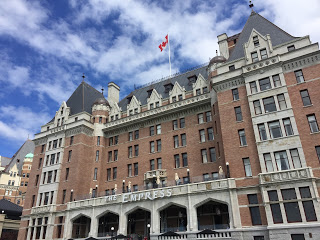 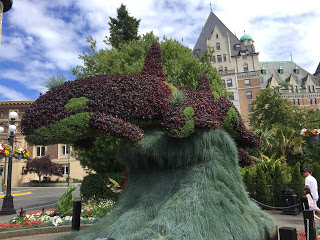 And in collage form. 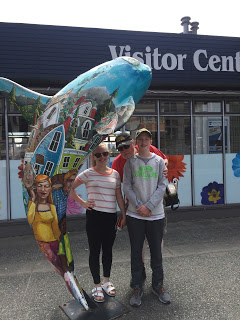 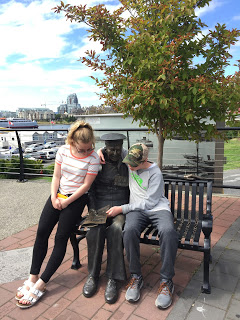 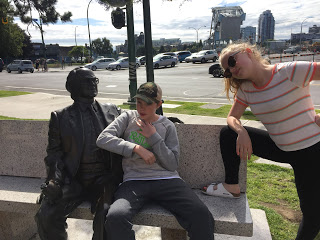 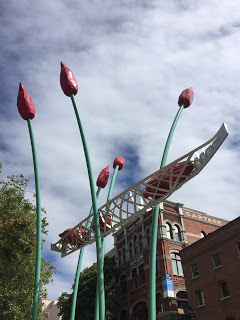 This one has a cat in a box.

We had a bit of time before the bus, which was meeting us at the Royal BC Museum, so we ducked around the back to check out the food truck festival (nothing struck our fancy) and then zip in the gift shop (some lovely earrings struck my fancy).  If we had another couple hours, we would have definitely toured the museum. 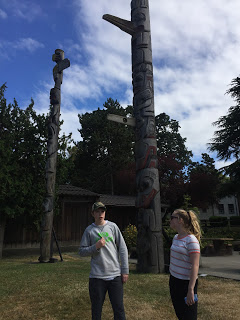 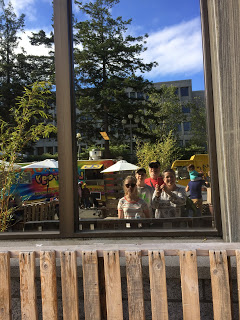 Herman took the beach route back to the ferry, and we caught some kites flying in the ombre blue of the late day sky.

And, I captured a great Spielberg/Abrams lens flare off the downside sun.

Then, it was back on the ferry.  Each way on the ferry, we paid a nominal upcharge to set up base in the SeaWest lounge: it was quiet and roomy and came with snacks and a million chargers! 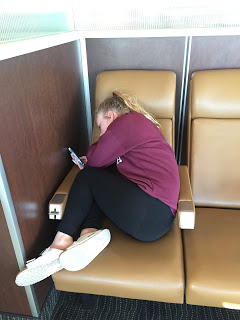 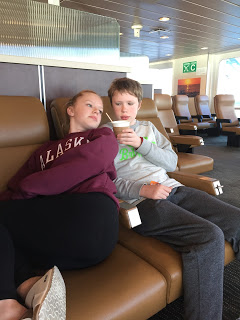 We has crossed over after breakfast and were sailing back about eight hours later. 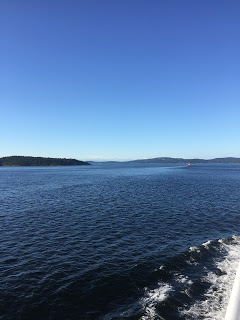 The sun was setting and gave another great lens flare, making it look like a SciFi moon.

We got back to the Wall about 13 hours after we left.  Our day had been a whirlwind of sea and sun, color and culture.  We couldn’t imagine that we had ever contemplated leaving Vancouver early.  Checking the time, we found we had just enough to grab a late dinner at Mucho Burrito (throwing in another national influence).
The green lights dancing in the Wall Centre trees as we walked back to our room said, go, go, go.  We had.