On our last day in Vancouver, we slept in: our flight home wouldn’t leave until 11:30pm, so we were in no rush.  As we searched for a lunch destination, the Wallflower Modern Diner offered great GF/DF options and was in a hipster neighborhood we had yet to visit.  So, we were in.
The diner was great; the crowd uber-cool; and it served mac and cheese with rice pasta and vegan cheese and GF apple pie w coconut milk ice cream.  Yes!

Harper noticed a cool boutique across the street, and Penn–who’s changing his style up from “licensed t-shirts” (his words)–wanted to check it out, too.  They picked up some surprisingly well-priced dresses, shirts, a bomber jacket, and a new charcoal Herschel backpack to carry it all along with us to our day’s destination: the Capilano Suspension Bridge Park.

The park grew out of the bridge itself, which has been around for over 100 years in some form.  In the early 80s, the park was purchased and began a period of intensive development and renewal.  It now includes the bridge, a treetop walk that spans the coastal rainforest, and a cliffwalk built into the walls that rise high above the river.  It was amazing. 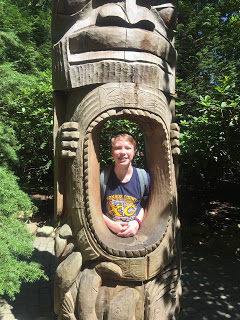 The original attraction here was and still is the suspension bridge.  It rises 230 feet over the river and spans 450 feet.  Ned read a plaque that said it could hold 96 elephants.  That was supposed to make us feel better because it was packed with people like a two lane LA expressway.  You stand at the end of the bridge and think: oh, a bridge.

You get on the bridge and think: oh, a bridge that swings back and forth and waves up and down with about 300 people on it.  Everyone walks like a drunk in an earthquake.  Most folks are laughing about it.  Others are hanging on for dear life.  Oh, and when you get across, there’s only one way back.  That’s right: the bridge. 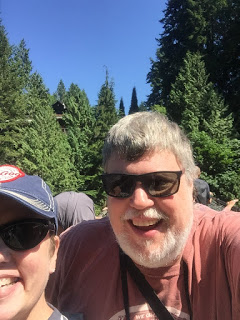 So much fun–unlike anything else we’ve ever done.

Once we crossed over, we started climbing into the tree tops.

Through a combination of stairs and suspension bridges between the centuries old trees, we found ourselves high above the forest floor getting a bird’s eye view of nature.

Started at the bottom … 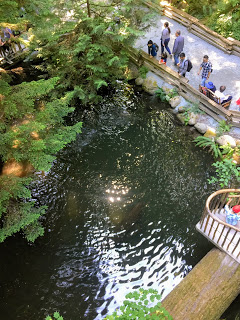 Along the way, we discovered that three of us are fine with heights. One of us isn’t.  If you remember our glider ride at Summerfest a couple years back, you may have a guess which of us it is.
(Hint 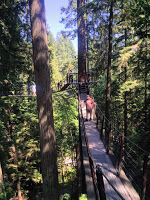 )
The tree tops walk was just beyond cool–again, unlike anything we’ve ever done.  You lose track of how high up you are until you look down and realize, wait, I’m walking between the trees. 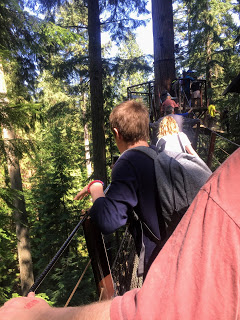 Can’t have a forest without some birds. 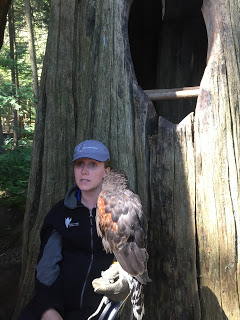 Best moment: the handler was Scottish.  A Chinese woman in the crowd looked confused and a bit startled when the handler described the hawk’s diet.  “Did you say it eats garlic chicken?”  “What?”  “How do you feed it garlic chicken?”  “It doesn’t. (pause) Oh, organic chicken.  I said organic chicken.  But, I love garlic chicken.” Relieved laughter.
Our next adventure was the cliffwalk.  As Bakhtin famously observed, it’s always context over text.  And, in the context of walking in the tops of trees and swaying our way across a river, walking along a cliff’s edge seemed tame.  That’s saying something!  It was also much sunnier, on a fairly warm day. 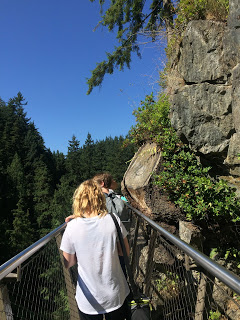 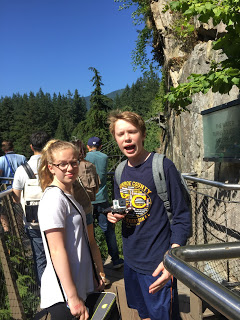 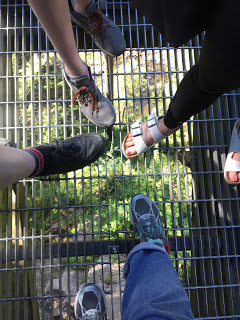 After a trip to the park’s really nice, Canadian-centric upscale goods gift shop, we decided to frame it and call it a day. 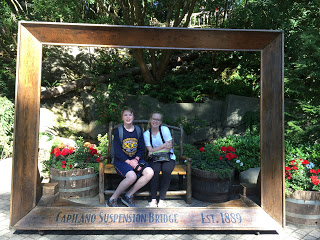 We took the free shuttle back to Robson Street with the intent of making our way to a Thai restaurant near the hotel for dinner before grabbing a cab to the airport.

If you’re looking for it, Robson’s the place to find it.

Along the way, Ned and Penn saw an Indian restaurant, and we abandoned our original plans. 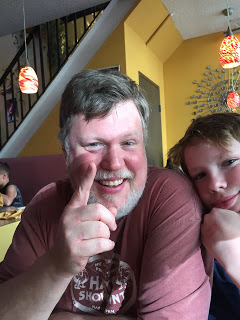 It was a small hole in the wall that fairly quickly filled up.  A tv in the downstairs dining room was showing WWE wrestling, and pretty soon, we were all watching it.  The fantastic looking gentleman in a tall turquoise blue turban and matching blue shorts, a tie-dyed t-shirt, and gold framed mirrored sunglasses.  The family with three sons across from us, who noticed our interest.  They were from Ontario, about three hours north of Toronto, and had come to Vancouver on the cross country train.  The Indian family next to us whose teenage son was wearing a massive silver chain and a black camouflage cap embroidered “dope.”  The blonde backpacker in Teva sandals waiting for take-out.  All of this because … Vancouver.

Thank you, Vancouver, for helping us end this summer’s family vacation in the most perfect way for a trip that took us to the farthest reaches of the US and the nearest reaches of global influence.  Everywhere we looked was beautiful.  Everyone we met was friendly.  Everything we did exceeded our dreams yet was somehow within our grasp.