Sunday morning started early–extra early because I was still on ROC time.  Harper joined me in wandering over to Panera for breakfast and some work.  As my son reminded me, I have often described Panera as where one goes for dinner when one has given up hope. I still stand by that statement, but this one had a sunny vibe and was literally a two minute walk from the hotel. So, it was amazing!

We brought back breakfast for the boys, who seemed less impacted by the time difference–seriously, it would have been 11 am back home, get out of bed, people!  Eventually, we were on our way …

Past some hidden roof-Mickeys (chill out, Donald) …

For the 10 minute walk to Disneyland. 10 minutes! Dude (see, I speak California), it takes longer than that for the monorail to get from the Grand Floridian to the Magic Kingdom. Not so magic anymore! Go, Dland, go!

Note the blue sky: the day was picture perfect California–all sun and 70 degrees.

The lines to the typical bag-check to get in the park seemed long, then we noticed they had an added feature that we didn’t initially recall from our last WDW trip (May 2017): metal detectors.  But, later, I remembered that we had to go through the detectors to get on the monorail from the hotel.  (Insert long, sad, world weary sigh here.)

Once in the park, we all shared the same thought: it’s so teeny!  It seemed like a Magic Kingdom prototype.  Seriously, look at these two family photos:

This is what Dland calls Cinderella’s Castle; it looks like her starter home before she bought cheaper land in Florida and got every zoning and land use variance possible to build … wait a minute!

We loved MK’s cute, teeny, adorable cousin.  The versions of Haunted Mansion and It’s a Small World were much better!

Haunted Mansion is fully integrated into a very well themed and lovely New Orleans section of the park (that made us all want to head back to NOLA), rather than stuck in a rando-corner by a colonial restaurant.

Before entering the mansion, you walk through a cool animal cemetery and up onto the porch.  Then, you walk through a long hallway that’s lit with hundreds of faux candelabras, lined with spooky paintings and busts, and filled with what looked to me to be Spanish moss but Ned pointed out were probably cobwebs.  Either way, it worked! A+! 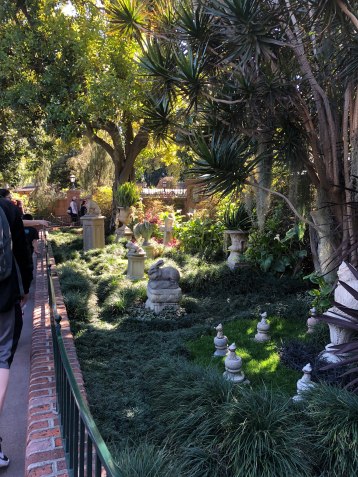 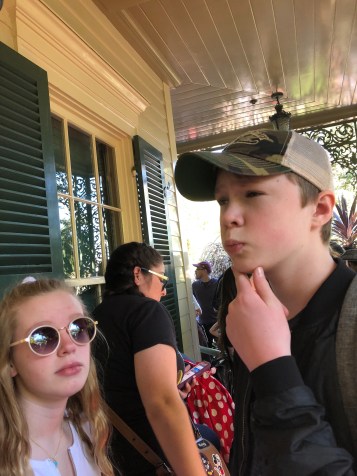 And after the haunting, Harper put a ring on it, agreeing with the salesclerk that things have more value when you buy them for yourself. Take that, high school would-be princes!

Because it never rains in Southern California, It’s a Small World begins OUTSIDE! Hold up. And, you sail through a topiary filled park on the way inside.  Look, it’s a Mango topiary. 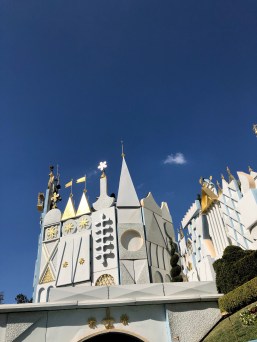 Inside, the lands are different, and Disney characters show up in each: Mulan’s in Asia, Cinderella’s in France, Alice’s in England, Woody and Jesse in the American West. And the whitewash room that ends the MK ride is replaced with one washed with bright colors. Rainbow, on, DL! 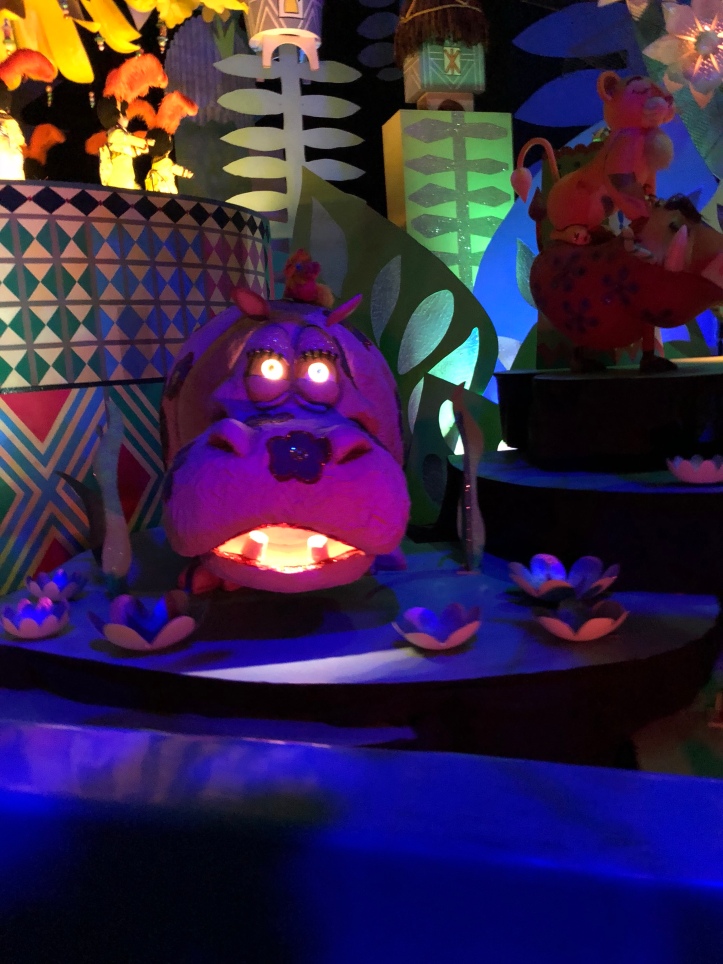 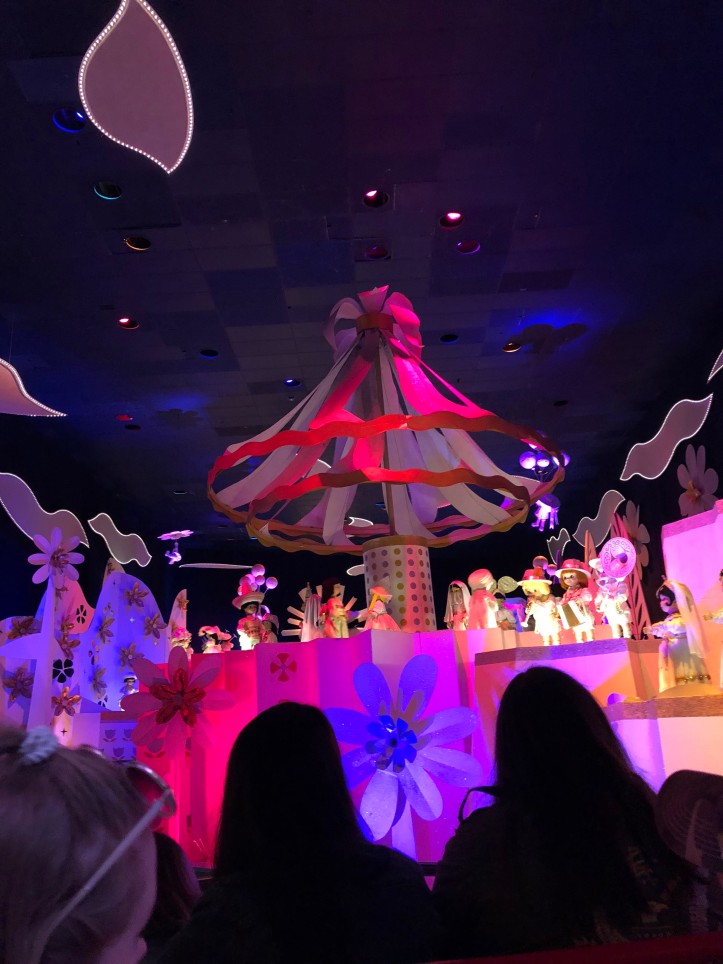 We did and we are, It’s a Small World! 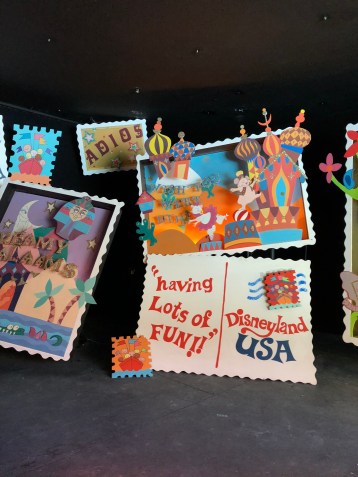 Another thing we liked a lot better about Dland is the MaxPass, so much better than Magic Bands.  From our phones, we added and cleared FastPasses hourly, assuring we could do everything we wanted in one day.  That included the Dland-only Matterhorn sleds, which the kids found lacking, and Indiana Jones ride, a thumbs up from Ned.  After years of walking away from 75 minute lines at MK, we finally rode the Jungle Cruise again, which got a shout out of me when a school of unexpected (and only in CA) piranhas appeared.  Of course, Space Mountain got squeezed in, too; the only sadness: we pooped out before catching the Nemo submarine ride (visions of the long departed 20,000 Leagues Under the Sea filled two old heads, as Ned said, “Wrong Nemo.”).  So much sunny fun in such a cute little park. 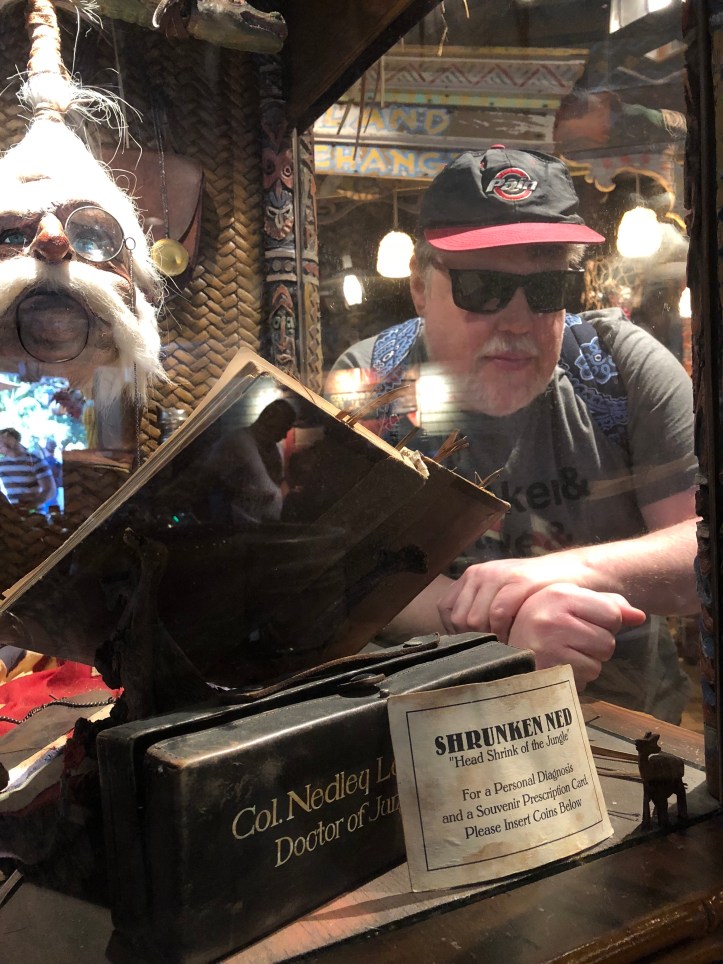 We walked next door to Downtown Disney (you read that right, Floridians) for a delicious dinner at Tortilla Jo’s, where we ate way too much and played Disney alphabet in which we all realized our memories are just really bad, before walking back to the hotel in the now cooler Anaheim night. 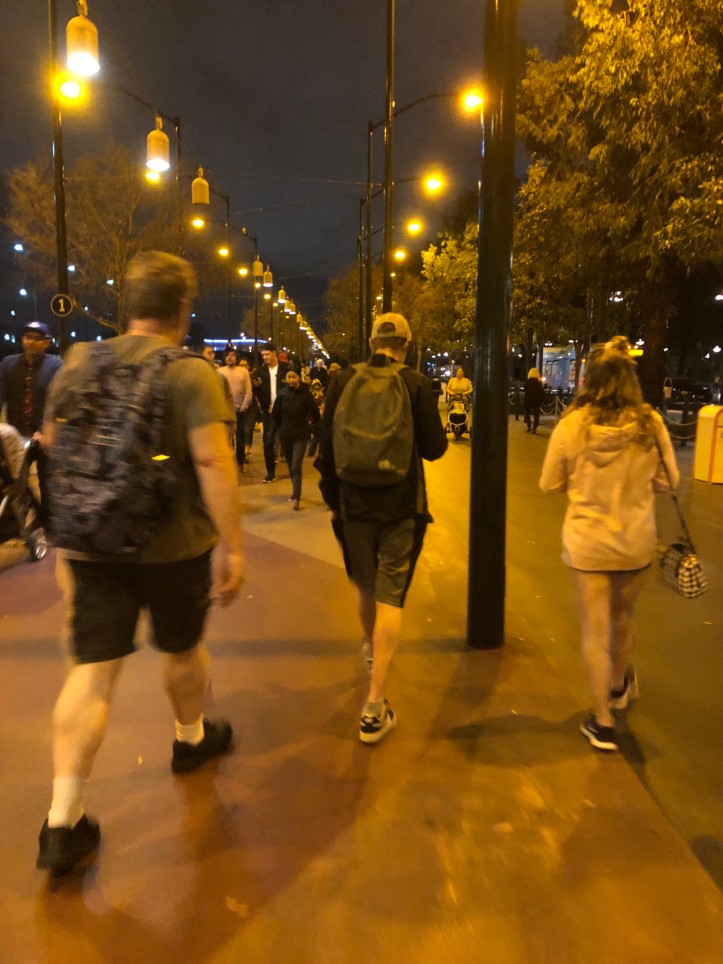 I stopped by our friendly neighborhood Panera to pick up a latte, hot cocoa, and smoothie, and we settled in to watch the end of the NBA All-Star game being played about 40 miles and a couple thousand dollars a ticket (I checked) away. 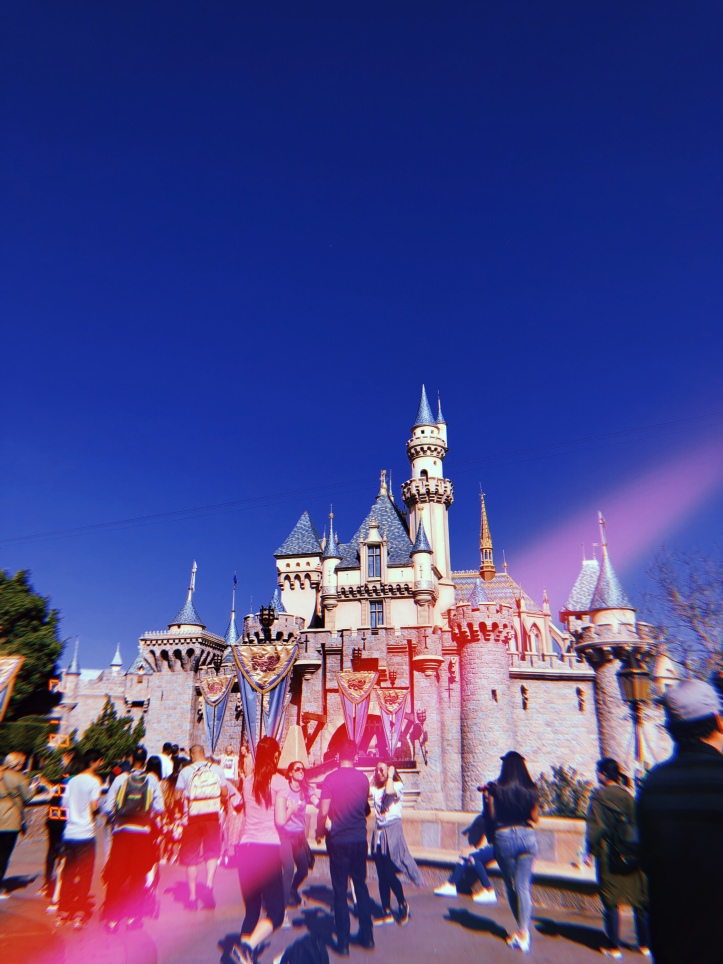